The Inanna Kitchen in the El Kelase Village of Hesekê plays an important role in the local development of women’s economy. Women who have partnered up in the kitchen are preparing food for the winter and sell for well below market prices. The kitchen also prepares daily meals. 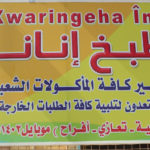 The Women’s Committee under the Hesekê Economy Directorate has developed several projects to develop women’s economy in the region.