Bulbul (Arabic: بلبل‎) is a village in the Afrin region of Northern Syria.

On 3 February 2018, armed clashes broke out in Bulbul and Rajo was invaded by Turkish forces and allied Jihadist militias. The village is currently under the control of Turkish-backed Free Syrian Army. For the fifth anniversary of the Turkish invasion, in this explainer we want to focus on four aspects of the current situation of the Afrin region: SNA crimes, administration and living conditions, forced demographic change, and new role of HTS (Hay’at Tahrir al-Sham, the dominant militant group in Idlib). 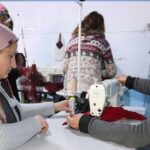 Karim and other women work in a sewing workshop in Sardam Camp, which shelters IDPs of Afrin, in Aleppo northern countryside. The women all share the same goal to challenge the hardships of displacement and provide for their families.