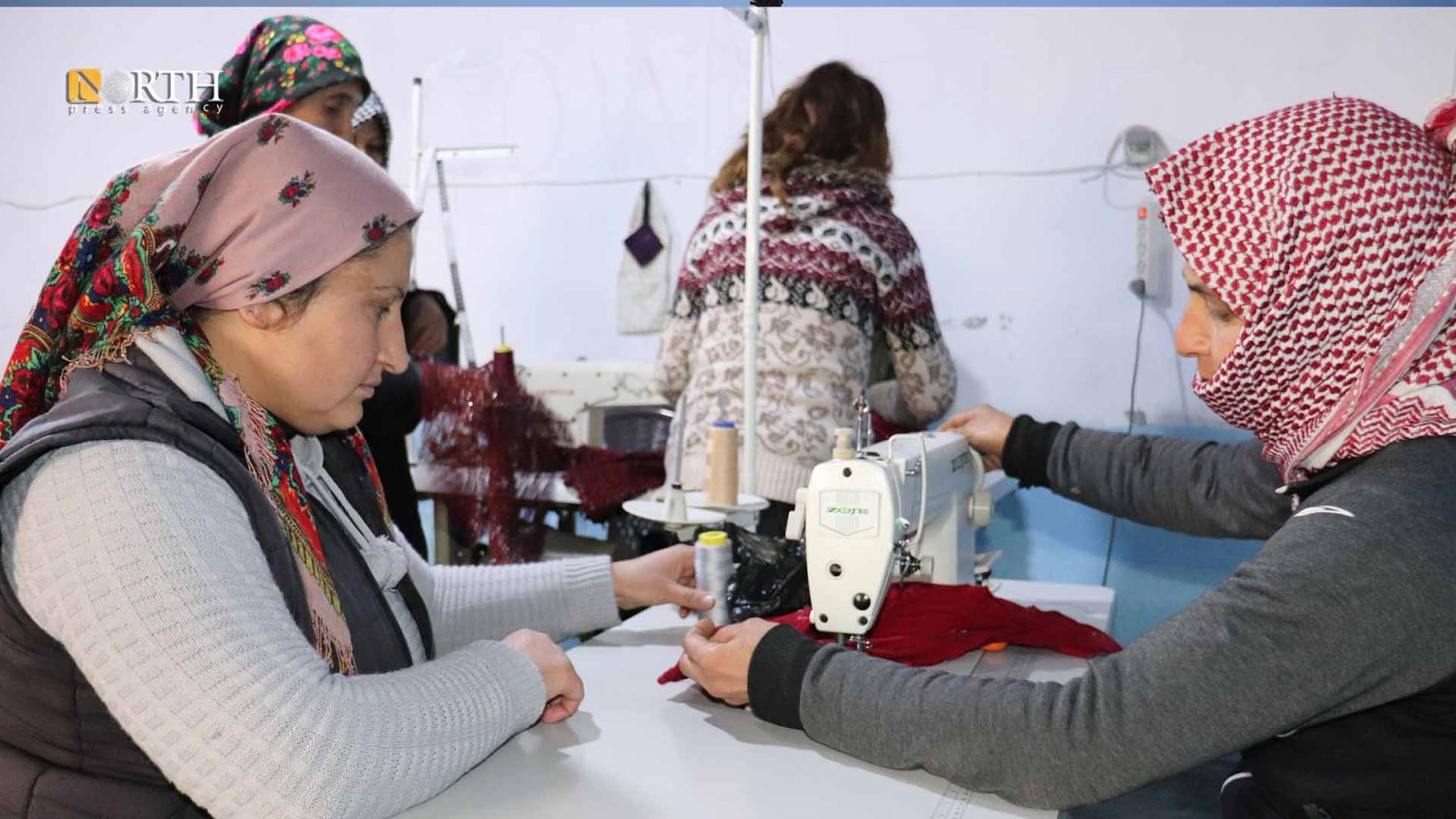 The 35-year-old Asmahan Karim, an IDP woman of Afrin is busy sewing a dress. She narrates to North Press her memories in sewing and the conditions she endured following displacement.

Karim and other women work in a sewing workshop in Sardam Camp, which shelters IDPs of Afrin, in Aleppo northern countryside. The women all share the same goal to challenge the hardships of displacement and provide for their families.

Prior to displacement, Karim used to run her own sewing workshop with up to 30 sewing machines estimated to be more than 20 million Syrian pounds (SYP over $5,000) and she had 30 women to work in the workshop then. But, as Turkey and Turkish-backed Syrian opposition factions invaded Afrin, Karim fled Afrin leaving the workshop behind. She fled without being able to move any single sewing machine with her.

In January 2018, the Turkish forces and Turkish-backed Syrian armed factions launched a ground and aerial offensive on Afrin alleging to expel terrorist groups away from Turkey’s border and protecting Turkey’s national security. The military action that lasted for 58 days at the time killed 498 civilians and wounded up to 696 others, including 303 children and 213 women according to human rights documentation organizations and centers functioning in northeast Syria.

Also, 300,000 civilians were displaced, according to the statistic of the Autonomous Administration which is currently operating in Aleppo northern countryside. Some of the displaced people took shelter in the camps of al-Awda, Afrin, Barkhodan, Sardam and Shahba while others were distributed in 42 villages and towns in Aleppo northern countryside. However, other families preferred to live in other cities across Syria, most notably in the Autonomous Administration of North and East Syria (AANES)-held areas and others sought asylum abroad.

The Women Board of the Autonomous Administration of Afrin Region, currently operating in Aleppo northern countryside, set up the workshop three years ago. But, because of the poor financial conditions, the workshop closed and reopened several times. The last time, the workshop was reopened with the support of Save Afrin, a non-state Foundation whose members are Syrian people of Afrin living abroad.

12 women work in the workshop, eight of them are trainees and three of them supervise the job and there is one woman who is in charge of the workshop. The workshop contains five sewing machines. The women train and work on them for two hours every day depending on electricity supply that is provisioned to the camp from 12:00 pm to 2:00 pm.

Karim is one of the supervisors in the workshop due to her long experience and she leaves her children alone in the tent during the two hours of work. Karim, who suffers hypopituitarism, has got three kids one of which suffers growth hormone deficiency (GHD). Karim complains the wage she makes is little and “is hardly sufficient to buy medicine for her and for her kid.”  The women trainees each earns 50,000 Syrian pounds (around $15) while the supervisors each earns 100,000 Syrian pounds (around $30). Following displacement, “our conditions changed altogether,” she said.

Zloukh Rashid, who chairs Afrin Women Board, attributed the low wages to the poor potentials. “The project gets low financial support from Save Afrin Foundation.”

Rashid pointed out the tight siege imposed by the Syrian government forces on the areas where IDPs of Afrin scattered, the taxes imposed on the goods and cloth are the most prominent obstacles that hamper the development of the project or even starting similar projects in other camps, she said.

The 51-year-old Fadila Khalil commutes to the sewing workshop every day for living. Khalil, who hails from Qantareh village that administratively follows Maabatli district in Afrin countryside, and her family live in Sardam camp. She has got a sewing machine and works on it after she learned how to use it.

Questioned by North Press correspondent about her current situation, Khalil, like other people of Afrin, started to recall her memories in Afrin. “When we were in Afrin we had our own property. Our condition was good. We had lands,” she said. “We did not experience the hardships of life. Now, it is too difficult.” Khalil hopes to go back to Afrin and her living conditions to be better.

Hevin Mohammed situation is of no difference. Hevin, a 40-year-old woman who has four children, was displaced from a village in Bulbul district and lives now in Sardam Camp. Her bad financial conditions compelled her to search for a job in the sewing workshop in turn for a little wage.

Mohammed said “I work here in the workshop but the wage is too little and barely help us buy staple food. My children’s daily expenses increase day by day.” Preparing to sew another dress, Mohammed said “We experience difficult conditions. Prices are high and our conditions has worsened following displacement.”