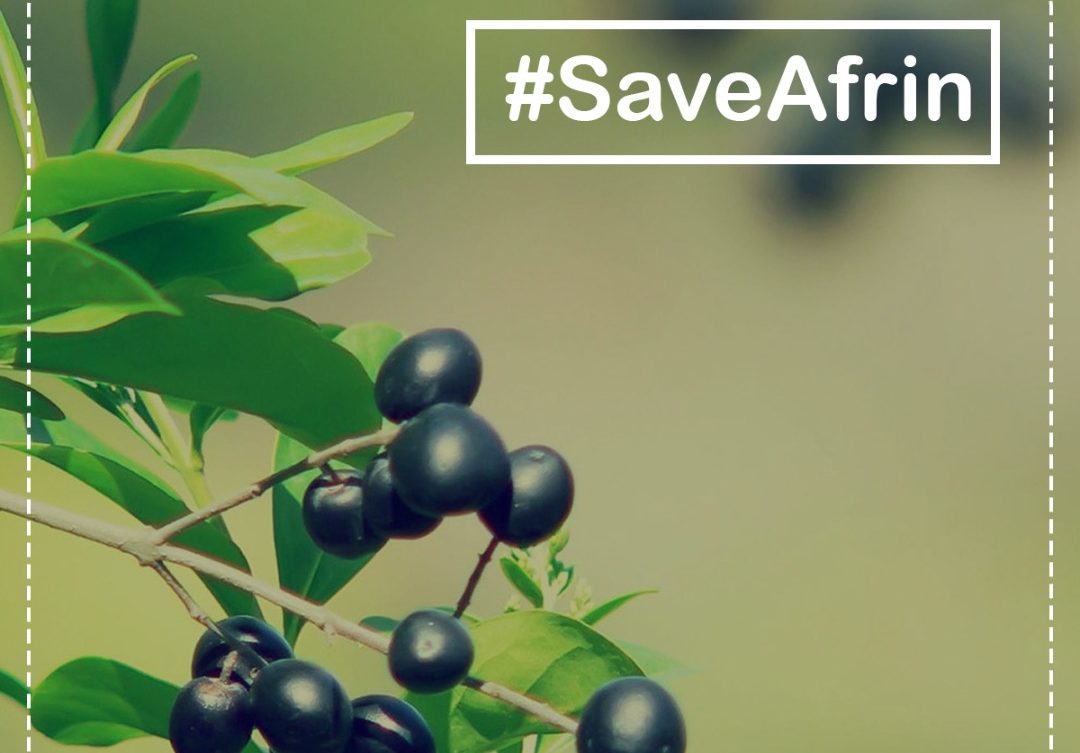 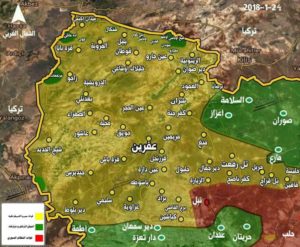 The Canton of Efrîn (Afrin) lies to the south of the Fertile Crescent, the cradle of civilisation. Located on the west of Rojava, it consists of 202,775 hectares of land rich in natural resources. Efrîn has seven districts, including Şêrawa, Cindirêsê, Mabeta, Reco, Bilbil, Şiyê and Şera. These are all populated by Kurds. Inside Efrîn city, however, there is a small Arab population. In Mabeta district, there are Alwaite Kurds. Throughout Efrîn there are dozens of Yezidi populated villages, with a total of around 25,000 inhabitants.

During the reign of the Syrian regime, the people of Efrîn had been ignored and subjected to cultural assimilation and political oppression. Due to this, many people migrated to Syrian metropolitan areas including Aleppo and Damascus. The civil war forced many Kurds to go back to Efrîn as the racist attacks on them intensified. Along with this, refugees from other parts of Syria migrated to and settled in Efrîn, leading to a significant population upsurge. While the population of the whole canton in 2011 was about 500,000 people, this number has now increased to 1,200,000.

Due to its antiquity, Efrîn also houses the remains of ancient civilisations such as those of the Horiyan, the Mîtaniyan, and the Romaniyan. Soil fertility and enough rainfall have allowed Efrîn to produce a wide variety of agricultural products. Efrîn is well-known for its olive trees, around 18 million, while its second production is wheat. Its natural abundance has made the ongoing embargo by the Turkish state and its affiliated extremist groups ineffective. 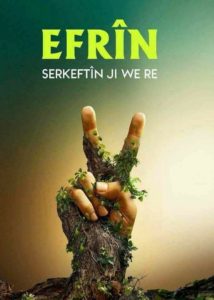 With the declaration of the Democratic Administration of Rojava on 19 July 2012 a new system was established based on direct democracy, gender equality, pluralism and secularism. Both Kurdish and Arabic languages were declared official languages, and the education system was designed in line with the democratic nation paradigm. The people of Rojava also created their own defence system, institutionalised in YPG (People’s Defence Units), YPJ (Women’s Defence Units), Asayîş (security force), the Duty of Self-Defence and the Community Defence Force. Funded by the people, this system is designed to defend them in case of attack.

As the result of protection provided by these forces, Efrîn was turned into the most secure place in the whole of Syria, attracting hundreds of thousands of refugees. Despite the fact that Efrîn had been suffering from an embargo, it embraced and settled those refugees. It was in September 2014 that the Self-Administration of Efrîn founded the Robar Refugee Camp, accommodating 400 families. Additionally, as a result of increasing numbers of refugees pouring into Efrîn, the Self-Administration in July 2016 set up the Şehba Camp,
accommodating 250 families. Human rights institutions have not offered any aid to Efrîn and thus it has to shoulder the burden on its own.

Throughout the Rojava Revolution, the Turkish state has not been able to tolerate the establishment of a new system based on direct democracy, gender equality, inter-ethnic co-operation, secularism and environmental protection. Once of the first measures the Turkish movement undertook was to erect a 900-kilometre wall, the world’s third largest, on its southern borders.

The invasion of Efrîn by the Turkish army and the extremist groups is not a new experience. Throughout these years, the Turkish army has shelled agricultural land on the border, stopping local farmers from cultivating their land. In August 2017, for example, the Turkish army launched one of the most dangerous attacks on Efrîn. 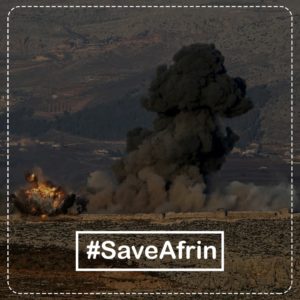 It was not until 13 January 2018 that Turkish officials took a record level of propaganda against Efrîn, setting an exact date for an actual invasion of Efrîn. On 20 January, the Turkish army launched its two-pronged war on the enclave, that has continued to date.

Turkish warplanes have been bombing central Afrin, the districts of Shera, Sherawa, Rajo, the Leluna and Bilbil districts, and the Ayn Daqna, the Mamula and Hejika villages in the Shera district.

Turkish jet fighters also carried out attacks on the Robar Refugee Camp, which shelters Internally Displaced Persons from Aleppo. A refugee, Nada Khalil, from Idlib, whose shelter was damaged by the shelling said: “We have forcibly abandoned our homes because of inhumane practices against us by the terrorist groups, and now where can we go now?”

Whilst aerial assaults continued, the Turkish army began a ground offensive through multiple points, including the Bilike village. Failing to get through, they frighten the local population to drive them out of their homes. In addition, they have fired artillery onto Celeme, Ishka, Basufane and Xelil villages. They have attempted to cross the border from Kurdo and Balia villages of Bilbil district. In each occasion, they have been repelled by the fighters of Syrian Democratic Forces.

Without a shadow of doubt, this war is illegal, because the Turkish army has violated the sovereignty and territorial integrity of its neighbouring state. Doubtless also is the fact that without Russian permission the invasion would not have been possible, because Russian troops had been stationed in the area and Afrin’s airspace is under the control of Russians. A senior military source said approval has come from the “Afrin-Idlib bargain” table. According to the reports, Russia, which withdrew its military force from the enclave after the start of operation, has arrived at common goals with the Turkish state.

Moreover, in addition to targeting civilians, the Turkish army have also been targeting archaeological sites. For example, they shelled the Roman archaeological area “Nabi Hori” with artillery fire. Erdogan’s goal is as ambiguous as unachievable. His declared goal for the invasion is the “elimination of all terrorists”.

A brief look at the history of how Turkey portrays the Kurdish people exposes the fact that a single Kurdish shepherd who identifies himself as a “Kurd”, not a “Turk”, would be labelled as a terrorist. Does that mean Erdogan wants to eliminate all the population of Efrîn? Is that achievable short of anything genocidal? Would the Syrian Democratic Forces, with the gallant resistance they have put forward until now, allow them to do this?

The Turkish state has tried to legitimise its illegal invasion by claiming that it targets what it calls “terrorists”. But, strategically, it wants to spread its influence in the Middle East, and tactically, wants to derail the Sochi talks, which Rojava representatives are scheduled to attend.

The consequences of war

The Turkish army has targeted various civilian areas mentioned above, so far killing [Wednesday 24 January] 35 civilians and wounding 106 others. Among the dead are 8 people from an Arab family, who fled Idlib and settled in Afrin because of the war. The family settled in Cilbir village some 4 months ago and lived on poultry farming. Their names and ages of those who were killed are as follows: Wael El Huseyn (1), Salameh, Huseyn (6), Musab El Huseyn (6), Fatallah El Huseyn (8), Hadeel El Huseyn (10), Refeh El Huseyn El Homer (33), Ehmed El Huseyn (17), Samak El Huseyn (16).

One critical issue is lack of medical supplies. There are six hospitals in the whole of Afrin Canton, with only three of them functioning. On Wednesday 23 January, Turkish warplanes bombed Jinderes hospital. This makes the situation even more serious.