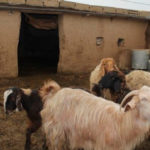 Women’s economy getting stronger with co-operatives

3 women raising sheep in the co-operative they founded in the Tenuriye town in Qamishlo are strengthening women’s economy.