The first women’s co-operative in Manbij, the Beit Al Barakah, or “House of Delight”, is a workers’ co-op. It was established in September 2017 with the support of the People’s Municipality of Manbij and the Economic Committee. The co-op, which includes ten workers who joined as members by buying 16 shares, aims to get women out of exploitation and persecution. Women participate by buying shares, and each share costs 20,000 SYP [Syrian Pounds]. A woman can participate with 3 shares maximum. The co-operative buys the vegetables and raw materials to make winter foods with the money collected by buying shares.

Sarah Ibrahim is an administrator in Beit Al-Barakah. Workers in the co-operative start work at 9:00 am and finish at 3:00 pm, preparing food for winter with supplies of fruits and vegetables bought from local farmers in the summer. 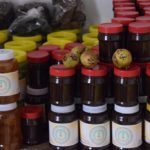 The ten workers in Al Barakah Co-operative are about to finish making the winter supplies, such as dried vegetables, pickles, pumpkin jam and olives. The Women’s Council announced the formation of this co-operative, in co-ordination with the Committee of Economy and Municipalities. The co-operative is called Beit Al Barakah [House of Delight], and it aims to get women 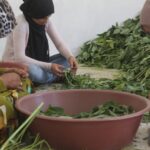 The First Women’s Co-op in Manbij: The House of Delight

The Women’s Committee in Manbij formed a co-operative for women on 6 September in co-ordination with the Economic Committee. It included a number of women who will make winter foods and distribute them to the markets. The co-operative includes 10 workers who joined as members by buying 16 shares.