Batman (Kurdish: Êlih‎) is a city in North Kurdistan / Southeastern Turkey, and the capital of Batman Province. It lies on a plateau, 540 meters (1,772 feet) above sea level, near the confluence of the Batman River and the Tigris.

Until the 1950s, Batman was a village, called Iluh, with a population of about 3,000. However, oil fields were discovered around it in the 1940s that resulted in a rapid development of the area and in the inflow of workforce from other parts of Turkey. In 1957, the village was renamed Batman, after the river namesake, received a city status, and became a district centre. Over the next 50 years, a significant amount of Batman’s one-story buildings were rebuilt as multi-story buildings. As a result, its population grew to many, many times its previous size. A 511 km (318 mi) km long oil pipeline was built in 1967 from Batman to the port city of Dörtyol near the easternmost point of the Mediterranean coast in order to transport the crude oil from the Batman refinery. In 1990, the city became the capital of Batman Province.

According to the national census data collected between 1990 and 2000, the population of Batman is growing at a rate of 5% per year. By 2008, it reached a population of 298,342, with a male to female ratio of 1.015. According to the 2000 census, about 50% of population is married and has about 5 children per family. About 5 people are living together in one house as family. The unemployment rate is about 20% for males and 10% for females.

According to the census of 2000, 15% males and 43% females of Batman were categorized as illiterate. Within the literate part, about 33% males and 29% females have not finished secondary school, 3.3% males and 0.9% females had university education, and about 13% males and 3.8% females had completed a high-school or an equivalent program. There are 71 elementary and 12 high schools in Batman.

The Batı Raman oil field, the largest oil field in Turkey, is located just outside the city. It produces about 7,000 barrels (1,100 m3) of oil daily.

Apart from oil, which is by far the dominant commodity of the region, Batman produces beverages, processed food, chemicals, furniture, footwear, machinery and transport equipment. A university was established in 2007, Batman University. It employs about 140 staff members and has the faculties of Science and Letters, Technical Education, and Engineering, which mostly cover topics about engineering, business, and administration. About 2,500 students, who come from different parts of Turkey, study at the university. The university is part of the Erasmus foreign student exchange program.

Batman has a local airport and a military airbase.

Last call for Hasankeyf as Ilisu Dam slowly engulfs it

Last call to try and stop the destruction of the 12,000 years old site. 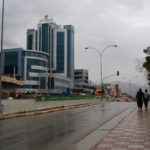