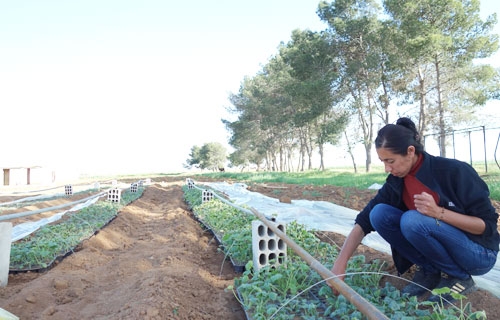 Let’s remind ourselves of the original situation

Under the Baath regime, Rojava had to provide wheat for the whole of Syria. And it had to export oil in order to make foreign currency for Syria. Nothing else.

And now? As long as there is war, this will determine the economy of Rojava. 70% of the budget is used for weapons, ammunition, logistics, and so on. That’s $10 million a month. Then the families of fallen fighters need to be supported if they no longer have an income. They are given land and they are accepted into cooperatives. There are also cooperatives being opened in craft and trade specifically for them. Finally, because of the embargo, petrol and wheat cannot be exported. And the prices for commodities like vegetables and textiles are climbing.

The 1,500 oil wells of Rojava used to produce 400 barrels a day, which were refined in Homs. Now, only a tenth of this is being refined with primitive methods and then brought with tankers to Cizîrê‎ [Cezîre / Jazira Canton] and Kobanî [Kantona Kobaniyê / Kobanê]. Oil is cheaper than water. Water costs 75 Syrian Lira [SYP] a litre (100 Syrian Lira = 20 Eurocents), diesel costs 35 SYP, petrol 65 SYP. The canton Afrîn [Kantona Efrînê‎ / Afrin Canton] is cut off from this distribution: here a litre costs 500 SYP, the same as in Damascus. The natural gas site in Dêrik [Derik / Al-Malikiyah] fills 9,000 bottles daily and sells them for 2,000 SYP per bottle – in the past one bottle used to cost 4,000 Lira.

Since the Tishrin Dam on the Euphrates was taken in 2015, the electricity supply of Kobanî and big parts of Cizîrê has been safeguarded. Apart from that, electricity is being produced by big diesel generators, especially in Qamishlo [Qamishli / Al-Qamishli], Serê Kaniyê [Serekaniye / Ras al-Ayn] and Hesekê [Hesîçe / Al-Hasakah].

There is an industrial area only in Hesekê. There, they want to create 3,000 workplaces within two years. Apart from that, there is almost nothing. A canning factory in Qamishlo and one in Kobanî [Kobanê / Ayn al-Arab] have been started up again. But they cannot export. In Dêrik a workshop is making lentils and maize into crisps and similar things. Oil mills in Kobanî and Dirbêsiyê‎ [Derbesiye / Al-Darbasiyah] could refine olive oil – but the olive trees are in Afrîn. Then there are almost two dozens of grain mills in Rojava that produce 550 tons of flour, more than is used.

During the war, Afrîn developed into a veritable centre for textile production, since many firms moved there from war-torn Aleppo. Today, its 400 workshops count 17,000 employees. They supply the whole of Syria. In the Kobanî and Cizîrê cantons there are only tailor shops, many of them cooperatives for women. In Hesekê, a thread-making workshop (with 270 employees) will be opened again on 1st May [2016]. There is also a cotton mill.

Agriculture is recovering after the fighting. Building materials are being privately produced, especially bricks. The only brick-making cooperative is in Dirbêsiyê. The biggest brick factory is in Hesekê. It is private and is being supported by the administration, which supplies fuel. There are countless producers of cement in Kobanî, but there is a need for more iron, since so far they have to recycle scrap iron.

Since diesel is so cheap, small private busses are cheap too. For example, the 100 kilometres from Dêrik to Qamishlo costs 300 Lira, or 60 Eurocents. There is no public transportation.

In the main area of the economy there is work to develop animal breeding. An animal farm and milk cooperative was opened in Dêrik; an animal breeding cooperative in Tirbespî [Tirbespiye / Al-Qahtaniyah]. The animal farmers sell their milk at half the market price. This helps drive down prices in general. Before the embargo, meat and milk products were exported to Bashur [South Kurdistan / North Iraq] from Rojava.

The news agency ANHA was created after the revolution. It has 200 correspondents in the whole country, a TV statio (Ronahî TV), which is on air 24 hours a day, as well as a newspaper (also called Ronahî), which appears twice a week in Arabic and once a week in Kurdish. Even more important is the fact that a dozen radio stations have sprung up, and 80% of their employees are women. There are hardly any printing shops, only one in Afrîn and one in Cizîrê, but there are no paper factories at all. There is a dearth of writing materials and books in schools. Printing machines are supposed to be installed this year in Dêrik, Rimelan [Rumelan / Ramelan / Rmelan] and Qamishlo, as well as in Kobanî and Afrîn.

The Syrian Lira, or Syrian Pound [SYP] is used. 500 SYP = $1 as of 15th April, 2016. There is strong inflation. In addition to the banks of the Assad regime, Rojava banks will now be opened for the agricultural sector.

In agriculture, decisive measures are being taken to build up a self-sufficient economy. The Baath regime had expropriated land from the Kurds in the name of so-called “land reform“, during the course of which Arabs were settled in the area. The administration of Rojava is trying to settle conflicts surrounding these pieces of land. 150,000 hectares are affected in the canton of Cizîrê alone [translator’s note: the German text made an error with the conversion of the measuring unit here]. For now, buying or selling these tracts of land is forbidden. A commission made up of ministries, justice, a public agency for agriculture, Asayish [police], as well as representatives of communes and councils, will examine the issue of the real ownership of the land. According to the law, every citizen of Rojava who applies at the requisite offices can receive permission to become a land owner and to build a house. However, people who were not citizens of Rojava during the war cannot make such a claim upon return after the war. The Economic Committee has around 40,000 hectares of land. Around 5,000 hectares is reserved for special purposes. That means that 35,000 hectares are available to be handed to cooperatives. The land is preferentially given to cooperatives made up of women and young people, families of those fallen in the war, communes and other bodies. This year, 20 to 30% of the revenue will be retained and made available for investment that will benefit the general public. In Qamishlo this is already happening, and if this works, the model will be applied in other regions too.

The goal: a diversified, ecologically durable type of agriculture

The Economy Committee wants varied vegetable and fruit cultivation instead of the wheat-mono-culture. A centre has been created in Amûdê [Amuda / Amouda] in order to develop seedlings.

In Tirbespî, an ecological village was founded so that people can acquire experience in ecology with help from volunteers from abroad. The installation of greenhouses is especially important for diversification. For this, the project Bistanen Rojava (“the vegetable gardens of Rojava”) has been launched. 18,000 square metres have been allotted to the project in the canton Cizîrê.

Since the regime wanted to develop a wheat monoculture, it repressed any cultivation of trees. This will now change. In a tree nursery in Dirbesiyê seedlings are being prepared. Derik is the centre of the re-forestation efforts. In 2015 80,000 trees were planted. All organisations in Rojava as well as the armed forces participated in this project. In 2016, the intent was to plant 100,000 trees. 4 to 10 hectares will be covered with young trees around each city.

Water shortage is one of the biggest problems for agriculture in Rojava which still has not been tackled. Until now people just indiscriminately kept digging new wells and as a consequence the ground water level kept sinking. The old wells dried out. Now, new methods of irrigation are being tried that have the aim of making water use more economic: drip irrigation, subsurface irrigation…