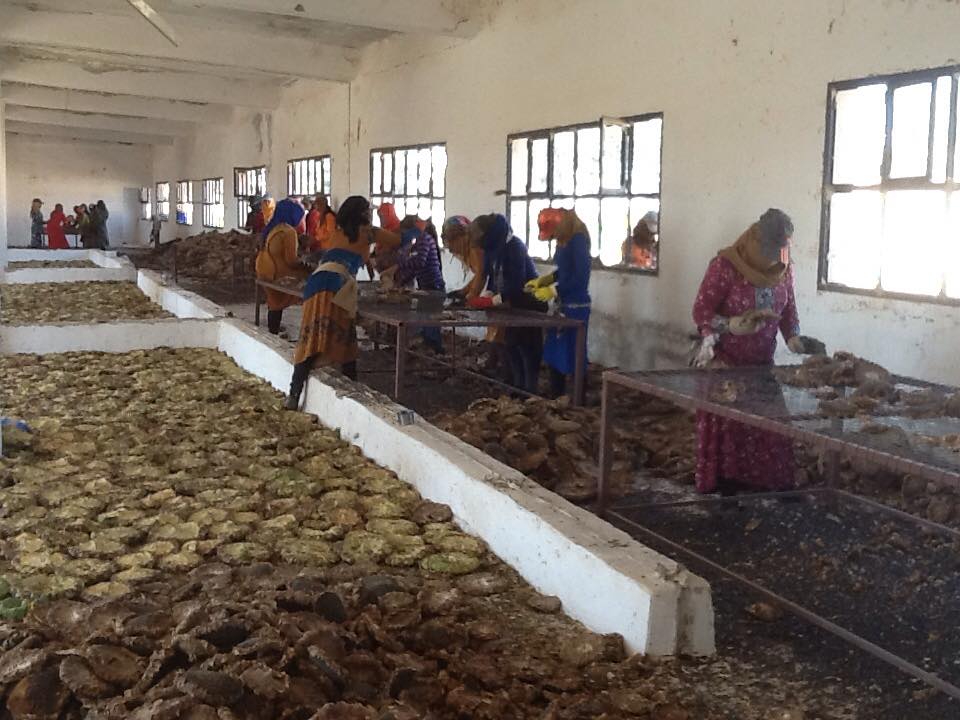 Women are the most dynamic force in the economy. What’s special in Rojava is that every day women are organising and taking control of new projects in areas ranging from agriculture to the textile industry. With the communal economy as their basis, the women are developing skills in order to produce according to the needs of the people. Their aim is to provide healthy nutrition and a contented life. They are showing that they can do this themselves.

The organisational umbrella for this is provided by Kongreya Star, whose economic committee is made up of six women. This leads initiatives in the communes.

Women form economic councils in each commune and in each region of the three cantons of Rojava. Proposals are discussed and decision taken in these councils. Because it is important for projects to fit into the larger scheme and be supported by everyone, they are also handed to the canton-councils of Rojava for consideration. The participation of the municipalities, as well as the organizations Desteya Jin and Kongreya Star assures that the women have broad support when they implement their plans.

New jobs are being created

The specific concept of the women’s economy has existed for one year. The first initiatives were workshops with shops. The communal economy learnt from this and is now organizing on the basis of these experiences. These economic initiatives were supposed to breathe new life into village life as a whole. The women’s projects concentrate on agriculture and stock breeding. In a short period of time, six agricultural women’s cooperatives sprang up. Each of them counts between 70 and 140 members. At the moment, up to 1,000 women are working in such projects.

Dimen Evin of the Women’s Committee of Rojava stresses that from the beginning, the idea was to bring women together with the earth, to fulfil their needs and to open shops in every city. A part of the work to be done on the countryside is the reparation of deep wells, the canals and the entire irrigation system. Since the people don’t have capital to invest, the first initiatives were funded by the economic committees. According to Evin, this has enabled people to plant more than 200 fruit trees in Tirbespî. The women’s organisations have taken over the care of more than 3,500 trees in Rimelan and 500 trees in Tirbespî. In Serê Kaniyê 1,000 pomegranate trees were planted for the production of seedlings.

700 fruit trees, grown by the committee, are to be handed over so that people can found their own cooperatives. In the same way, a chicken farm has been built and will be given to the people. This system of creating production which is then handed over to the people to establish a cooperative is not limited to agriculture and cattle, but is also found in other sectors, for instance, textile workshops are being turned into cooperatives, as well as canned food manufacturers. The profit that the women’s committee makes as one of the participants of a cooperative is then channelled into other economic projects.

In the fight against the economic embargo, a lot of emphasis is being put on self-sufficiency. Greenhouses are being built and the first of them are already ready. Especially in the winter, when there are not enough vegetables because of the embargo, they are essential, since only with them can Rojava provide for itself. In the near future, vegetable cultivation will be expanded to other villages. They also plan to make the villages centres for the production of canned food.

A big hope rests on the project Bistanen Rojava, “the gardens of Rojava”, which Naide Zengin is building. She was a building-engineer in Great Britain and came up with this proposal while still there. When it was accepted, she moved to Rojava and started work. In October she took the spade and planted the first seedling, creating the basis for greenhouses in the right across Rojava. Within seven months up to 5,000 trees had been planted and 4,000 square meters were irrigated and covered with greenhouses.

Zengin says, “Women are reaching their full strength through this work. We strive to bring women’s full potential and capabilities to the fore. For this we organise courses about greenhouse cultivation. Whoever participates in the courses not only gets lessons in agriculture, but also in Kurdish and in driving cars. That means everyone receives a versatile education. We plan to open creches and schools in order to facilitate the participation of mothers. At the moment, the conditions in Rojava are not yet ideal. We are determined to go through with our plan though, and we are certain that with enthusiasm and unity we can accomplish our goals. We are convinced that we will be successful.”

The economic dimension of resistance

Being economically active is a new experience for many women. This is where theory and practice meet. Education is provided at the academies of Kongreya Star. Apart from that, there are preparations to launch education programs for agricultural engineers, vets and specialists in craft and trade. As soon as we have the necessary experts, we will form a committee for research on production and economics.

There was not a lot of interest in agricultural training last year. This year, things look different. The women determine how many hours they work and how much free time they have for themselves. Delal Efrin from the Women’s Economic Committee explains that in Kurdish society it is normal for women in particular do a lot of things communally. Sharing, solidarity and organising in communes comes naturally to Kurdish society. “What we want is to develop the communalism that is already present. We want to make people value communalism more and give it long-term stability. We have to strengthen the feeling that communalism is a part of our culture and identity. The first cooperatives emerged in agriculture, and they resembled modern cooperatives. When cooperatives were opened in other economic branches, people gained experience, and trust in this type of structure grew. Only then did people start to realise the full value of this way of organising. We have to strive to expand these structures and develop them further in order to consolidate the trust that has been gained so far. There are still a lot of habits from the times of the old regime, and people still have reservations, but we can overcome all this. I have confidence in our people. We will transpose the successes we had in other areas onto the economy. Economic independence is a form of resistance. To rely on one’s own strengths, stand on one’s own feet and move with firm steps into the future – that’s what’s important to us.”

Mezra Botan is also a member of the Economic Committee of Rojava. She works in the cooperative Hevgirtin, also in trade. Women display a lot of energy in the economy, she says. In her opinion, women must take their place everywhere, in production, industry and trade. She declares that the big cooperative Hevgirtin applies positive discrimination in favour of women. “Now, women are in the majority in the economy. 70% of all activities in the cooperatives are carried out by women. Until recently, women had not been allowed to possess any private property. We have to empower women to participate in trade and the economy. That’s why we strive to increase the percentage of women in the committees. We begin with “people’s shops”, most workers here will be women. Then, we plan to create new jobs in the production of milk, cheese and pasta, which we will give to women. The effects of the old order on the economy must be overcome. Male points of view and attitudes still dominate. To counter this, we use a system which lays value on women: at least 60% of all places must be reserved for them. The woman’s way of doing things is focused on justice and the general benefits for society. Their way is not as self-centred as the male way of doing things. Women getting into politics is of a great benefit for the people. Putting women into these positions is our greatest asset, and it will be the basis for our whole political system.”