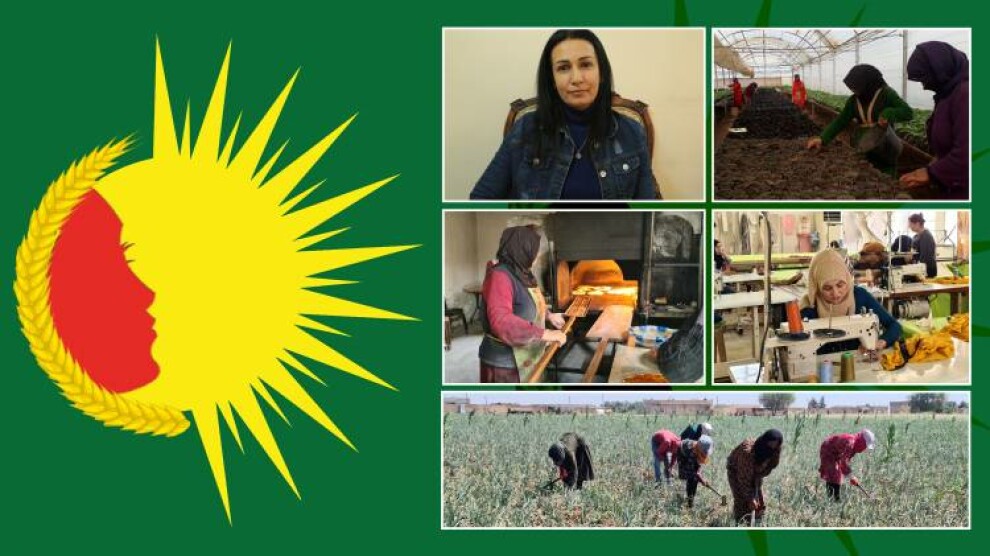 Pointing out that the women have improved the economy in Rojava, Armanc Mihemed, executive of the Economy Committee of Kongra Star, said that they have achieved significant successes by realizing many projects.

In history, the economy was improved by women; however, all economic gains of women were taken by men due to the patriarchal mentality. After the revolution in Rojava, the women working in the economy have conducted many significant projects. One of the most important committees of Kongra Star is the Economic Committee. The committee has developed many projects to empower women’s economy. The committee has worked coordinately with cooperatives in trade, agriculture, textile, food and industry areas. Armanc Mihemed, executive of the Economy Committee of Kongra Star, spoke to NuJINHA about the activities of the committee.

Stating that the economy was created by women thousands of years ago, Armanc Mihemed said, “Agriculture, and industry were discovered by working women. However, dominant men took away all the economic values of women. After the dominant men took control of the economy, the state system was imposed on society. When the women controlled the economy, they had a communal economy. Women generally thought of the whole society and shared the economic incomes equally. But the dominant men confined women to home as slaves after taking the control of the economy. Although thousands of years have passed, the influence of the male-dominated culture on the economy still continues. Although women are educated and have a great job in the state system, they face great obstacles and difficulties.”

“Women have left their mark in history”

“The Economy Committee was formed in 2015”

Noting that the first economic organization of women in Rojava was in 2014, Armanc Mihemed said, “After field works, the Economy Committee was officially formed in 2015. Since then, we have worked to empower women economically. First, the cooperatives were established to support women. Our aim is to support women to improve themselves in the economy in order to stand on their own legs. Women first started working in agriculture and they, of course, faced many difficulties at first. In 2015, many women took part in the committee. We opened our first office in the Cizîrê region. At that time, women got to know what the economy is. Although the customs and traditions of our society posed an obstacle to women, they never gave up and took great steps in the economy.”

Speaking about their economics projects, Armanc Mihemed said, “We carried out many projects in the field of industry, textile and trade within the framework of the perception of the cooperative. We can say that we launched many cooperatives for trial purposes. Although we faced many obstacles, we never stopped. We held meetings and training to tell what the cooperatives are. We opened the Women’s Economy offices in all regions of Northern and Eastern Syria and provided training to the members. In this way, we have overcome the obstacles and difficulties faced by women by struggling. Finally, we opened offices in the liberated Arab regions. Many Arab women took part in the committee. We developed tandoori, textile and oven projects in these regions and many women work in these projects now. We developed an agriculture project in Tirbespiyê district and there are 80 greenhouses in the district now. Nearly 80 women have worked in the greenhouses. We also developed an agriculture project in Dêrik. The women plant vegetables and sell them in the markets.”

“About 3,300 women work for cooperatives”

Drawing attention to their textile projects, Armanc Mihemed said, “We have carried out the textile projects in the Euphrates, Shehba, Cizîr and Dêrê regions. Women sew clothes and sell them in the Lavin clothing shop. Women also produce canned food for winter. These products are sold in the markets. About 3,300 women work for the cooperatives. We have carried out our tandoori projects. In Serêkaniyê, women baked bread during the attacks to not leave the people hungry. Women voluntarily participate in the economy. We want to develop more projects for women according to their demands.”

Stating that women have taken part in the economy again after the revolution in Rojava, Armanc Mihemed said, “We want to develop more projects for women in the future. This year, we will establish a special academy and provide ideological training there. We also want to develop a livestock development project in communes. Our tandoori and agriculture projects will continue. If women have economics projects, we will support them to realize their projects.”

Cultural and artistic activities are the most important activities in Rojava. While many projects have been conducted with the participation of women, children and young people from ethical groups, Rûken Mihemed, executive of the Hîlala Zêrîn Culture and Art Movement, emphasized that the post-revolution culture is kept alive by women.

We can say that the culture has been renewed and modernized in the 21st century by women. After the revolution in Rojava, cultural and artistic activities have been carried out; many songs have been written, theater plays have been staged and films have been shot about the resistance. Women founded Hîlala Zêrin, women’s culture and art movement, in 2016 in Rojava. Many women, children and youth take part in the activities of the Hîlala Zêrin. We spoke to Rûken Mihemed, executive of the Hîlala Zêrîn Culture and Art Movement, about their activities.

Stating that there were cultural and artistic activities in Rojava before the revolution, Rûken Mihemed said that women couldn’t participate in these activities due to social pressure. “After the revolution, women began to organize themselves in culture and art. The cultures of the peoples were destroyed; their languages were assimilated by the sovereign powers. We needed an organization to revive, create and weave our culture. In 2016, we officially founded Hîlala Zêrîn.”

“We have protected the legacy of women”

Underlining that they have protected and kept alive the legacy of the Rojava Kurdistan revolution, Rûken Mihemed stated,”We prepared a regulation according to the women’s movement and its history. Since the foundation of the movement, important cultural and artistic activities have been carried out. Our aim is to protect and keep alive the legacy of the Revolution in Rojava, also known as women’s revolution. We held our first congress in 2017 with the participation of 200 delegates consisting of Arab, Kurdish, Syriac and Circassian women. At the first congress, we determined the name of the movement as Kevana Zêrin. We opened our first offices in Afrin and Aleppo after the congress. We opened a school for children. We have carried out works that reveal women’s ability in art.”

“We have revealed the original culture of women”

Rûken Mihemed continued to talk as follows: “Sovereign states constantly attack the culture and history of the peoples. We can see this in Afrin, where the attacks aim to destroy the historical sites and change the demographic structure. The attacks on Til Xelef, a historical town of Serêkaniyê, also show this. For this reason, we first began to research and collect the archives and voices of women. We found many ancient records and archives of women. We have also revealed the culture of folklore, food, old instruments, songs, dengbêj and clothing of women. We have revealed the original culture of women. Our aim is to document, renew/modernize the culture of peoples. We have formed folklore and dengbêj groups consisting of mothers. At the beginning, women were shy or had difficulties due to the customs and traditions of the society, but they have overcome those difficulties and appeared on the stage.”

“We have passed down the fairy tale culture”

Pointing to the old tales, Rûken Mihemed said, “We have collected and documented old fairy tales. We developed a project about the old fairy tales with JIN TV to pass down the fairy tale culture. We have produced a television program. In the program, women, especially mothers, tell old fairy tales. The Culture and Art Committee (of Kongra Star) holds a festival once a year with the participation of many organizations. Women have written many songs about the revolution. Culture and art have played an important role in the revolution.”

“Arab women play an important role in the culture and art”

Emphasizing that they have realized the Cultural Revolution within the revolution, Rûken Mihemed said, “Women carrying out cultural and artistic activities have played a great role in the activities for the International Women’s Day, March 8, Newroz celebrations and Hozan Mizgin commemoration events. We, as Hîlala Zêrin, composed a song about Hozan Mizgin. We see Eyşe Şan, Meryem Xan and Hozan Mizgin as our art teachers. We have realized the Cultural Revolution within the revolution (Revolution in Rojava). We have tried to form our own system against the capitalist system.”

Stating that they have developed projects for children, Rûken Mihemed said that they have organized many courses such as baglama, guitar, kaval and violin courses for children. “A children’s festival has been held for six years. The last four festivals were organized under the leadership of Hilala Zêrin,” she said.

They will open the Women’s Culture and Art Academy