As reported by Eliza Egrit and Tom Anderson, the agricultural board of Kobane set up a co-operative where 1,400 sheep have been distributed to the poorest families in the community. These families were encouraged to live from the sheep’s milk. Any new lambs were sent back into the co-operative and distributed to other families.

It is not clear whether this co-operative is still active. 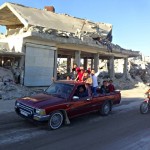 It's been one year since the US bombing of Kobanê—then partly occupied by Daesh [ISIS/IS]—and most of the buildings are still in tatters. Kobanê is in Rojava (meaning 'West' in Kurdish), a Kurdish majority region in the north of Syria that declared autonomy from the Assad regime in 2012.