Newroz is one of the first bakeries that were opened in the area of Himo in Qamishlo. The movement started the planning of the bakery and buying the machines for it in late 2017, with the help of the Families of Martyrs Association and the House of Co-operatives. The bakery cost around 40 million SYP, and 50 families are participating in the project. A new administration committee has been formed, as well as a monitoring committee. There are six workers in the bakery who package the bread and do general cleaning, one worker who prepares the dough, a mechanic, an accountant, and three administrators. 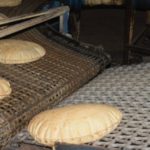 The bakery has been working well every day, and the bread is being distributed to everyone in the area. The bakery has made 5 million SYP in 6 months. The families of martyrs have received 3 million, and the rest have been used to buy more necessities for making bread such as new machinery and flour.