Make Rojava Green Again is the ecological campaign of the Internationalist Commune .

“We, the Internationalist Commune of Rojava, want to contribute to the ecological
revolution in Northern Syria. To this end, we have started the campaign “Make Rojava
Green Again”, campaign in cooperation with the Ecology Committee of the Cizire
Canton. The campaign has three aspects:

The first two concrete projects of the “Make Rojava Green Again” campaign are:

The collective work in the nursery will also be a part of the education in the
internationalist academy, as well as a concrete expression of solidarity with the
communes, institutions, and structures of the population.” 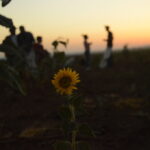 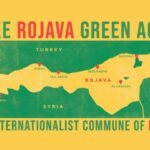 We call up on you to defend Rojava! We call you to raise your voices and actions, to organize and to connect with each other. We call up on you to support us in solidarity and spread the word. Let’s build an international front fighting for climate-justice! Rojava can be a role model for humanity to save mother earth. Let’s stand up for it together!

“In the liberated areas, every harvest is a revolutionary act. Our enemies aim to destroy the revolution by starving us – through embargo, arson, and violence. The collectivised lands we harvested this week lie in the shadow of a militarised imperialist border that divides the Kurdish people from each other, and in sight of fields