The city of Iğdır sits on a plain at a lower altitude than most of Turkey’s eastern provinces. This allows agricultural production including apples, tomatoes, cucumbers, peaches, pears, sugar beet, watermelons and melons. However, the most famous produce of Iğdır are cotton and apricots. Iğdır has 12 local daily and weekly newspapers.

The rising agricultural production and the opening of a border gate with Nakhchivan in 1992 have enabled the town to be livelier and wealthier than its neighbours in the generally impoverished eastern Turkey. There are many cafes and restaurants. The best-known dish is a meat stew called bozbaş.

Air pollution is a chronic problem, mainly due to the burning of coal. 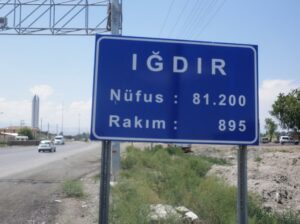 The city and province are named after a western Turkish clan called Iğdır that belonged to a branch of the Oghuz Turks who spread throughout Anatolia. The city in Armenian is called Իգդիր, Igdir, also Ցոլակերտ, Tsolakert, after an ancient settlement nearby. The city is most commonly called Îdir in Kurdish, however the city is also called Reşqelas in Kurdish, which is of Kurdish etymology.

Today, Iğdır has an Azerbaijani-majority, with large minorities of Kurdish and Turkish residents.

In the municipal elections of March 2019, Yaşar Akkuş from the Peoples’ Democratic Party (HDP) was elected mayor. He was dismissed due to terror related investigations on 15 May 2020, and Enver Ünlü, the Governor of the province, was appointed as a trustee for the municipality on the same day.