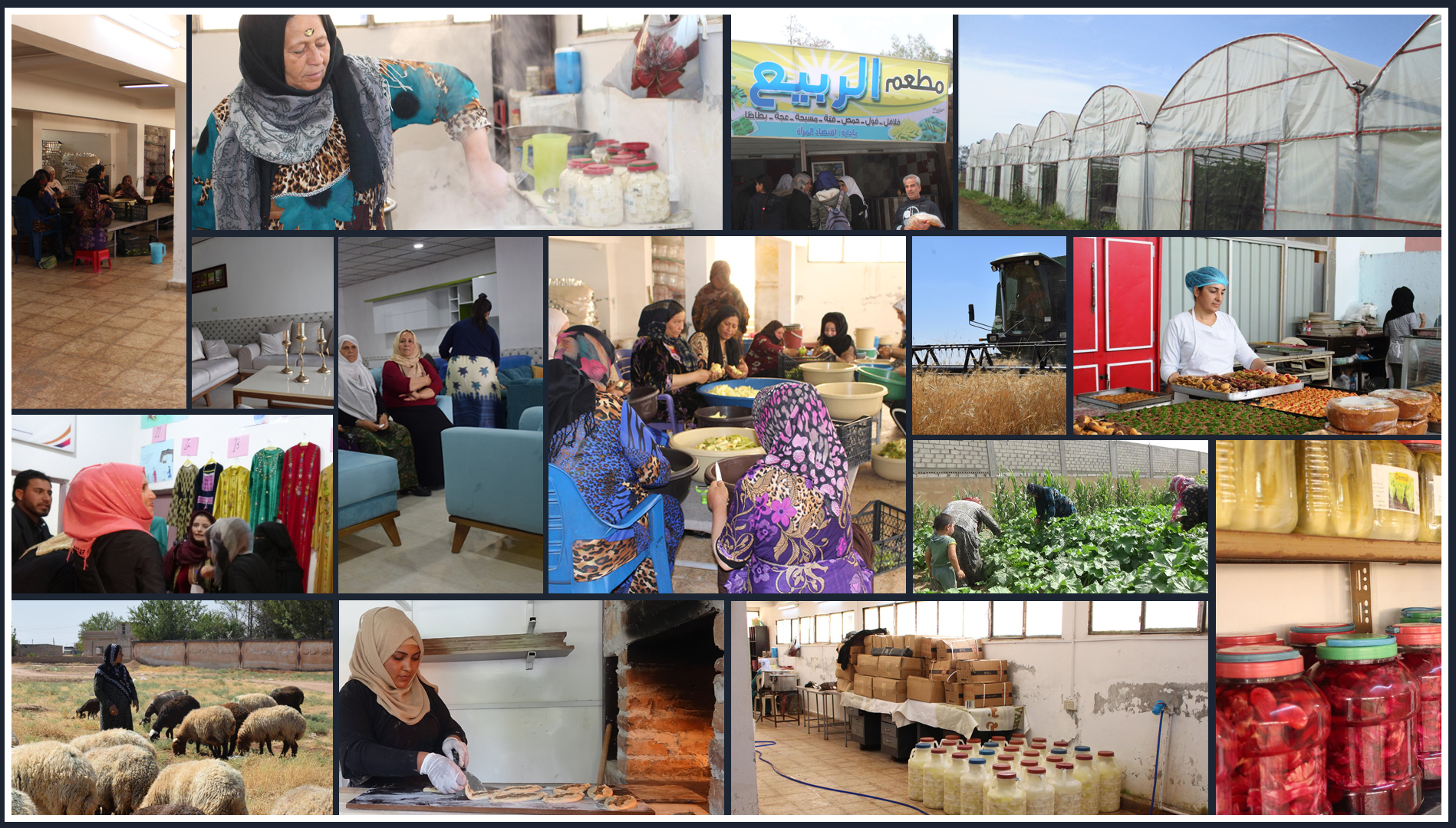 Despite the simple capabilities under the capitalist economy, and the constant attacks of the occupier on the regions of North and East Syria, the economic toil of women has bore fruit to good results during 2020, as they played a leading role in easing the economic crisis that the region suffers from.

The role of women has always been obscured in all life fields, but women were able to highlight their role with the revolution in northeast Syria, known as the Women’s Revolution, as they had an effective role in leading the revolution.

During the 10-years-old Rojava revolution, the women’s pent-up ambition and creativity were uncovered due to the established concepts of the dominant regimes. Women have been able to make breakthroughs in all areas of life.

One apsect of the women’s constructive role in 2020, developing the economy of society and women in particular, was the Women’s Economy Committee of Kongra Star, which contributed greatly to alleviating the repercussions of the US’s Caesar Act against the Assad-led government on the 17th of June, and the devaluation of the Syrian currency against the US dollar, which generated a stifling economic crisis in Syria, affecting the regions of northeast Syria as well.

‘Bringing back the economic core’

The jump-start to the women’s economy started with the establishment of the Women’s Economy Committee in northeast Syria during 2015, as numerous projects were undertaken. Establishing this committee meant to search for ways to restore the core of the economy, by replacing the greatest-profit based approach of the capitalist economy, and the monopoly in vogue at the present time, in the communal (societal) economy, which defines the economy as meeting the needs of society rather than from personal interests, so that women can reach the height of their economic independence.

Najjar continued: “the greenhouses were undertaken in many regions of northeast Syria. In the Euphrates region, agricultural lands have been invested. In Al-Hasakah canton, 5,000 dunams of agricultural land have been invested, and approximately 78 displaced women from Serêkaniyê were employed in them, and in Qamishlo, 1,800 dunums were invested, securing jobs for 60 women. In Dêrik sub-district, three agricultural associations were formed and Amuda, Tirbespiyê and al-Shaddadi also associations were formed.”

These various associations contribute to reviving the economy and collective solidarity work among members of society; an effective way to improve the standard of living, as the products are sold at low prices to enhance the spirit of cooperation and partnership among women and the development of local production.

Najjar indicated that they have set aside small factories, in which natural supplies free of chemicals are used, in the cities of Raqqa, Hasakah and Derbasiyah sub-district. An exhibition of home furniture was opened by women in Qamishlo. A similar project is scheduled in a few days in Girkê Legê district.

She added, “Sewing workshops have been opened branded as Lavîn and its branches in Kobani, Qamishlo, Derbasiyah, and Girkê Legê.”

A restaurant has also been opened in Semalka, Dêrik district, as well as food stores in both Washokani and Newroz camps.

It also established two bakeries in Al-Hasakah and Tal Tamer, a livestock project in Tirbespiye and a “Lara” sweets and pastry factory in Qamishlo and Amuda.

‘Our goal is to alleviate the economic crisis and empower women ‘

She noted that their goal was not limited to alleviating the burdens of the economic crisis, but rather to empower women to achieve their economic independence.

Regarding the challenges, she explained that the limited financial capabilities of the committee, the continuous Turkish attacks and the plunder of its mercenaries the goods and gains of the areas occupied and the mentality of the society that is still under the control of the capitalist economy challenged their action plan.

‘Under-study projects and scheduled ones in 2021’

She mentioned the projects that are still under study, which are scheduled to be implemented during 2021, saying: “The projects are building small factories for the manufacture of chips and pasta, detergents, and more. They are still under study, and it is likely that livestock will be developed.” She said that all planned projects will be implemented with the support and solidarity of women and society.

She emphasized that the projects of 2020 were 80% successful, despite the fact that they were established with simple means, but that they opened the way for women’s independence.

At the end of her speech, Ghalia al-Najjar called on women’s organizations and movements to stand up and cooperate with them, to be able to support the people of their region economically, and to seek to invest in more communal projects to allow all women to reach economic independence.