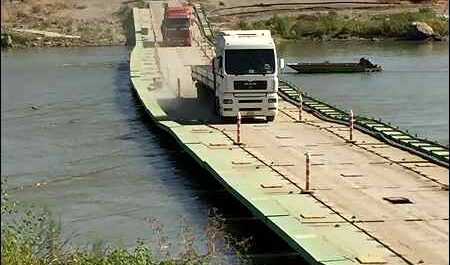 Rojava Information Center: The Caesar Act has been created by the US Government to put economical pressure on the Assad regime. In which ways would you say these sanctions affect the economy of North and East Syria (NES) as well? How are the economies of NES and the rest of Syria connected?

Cheleng Omer: Undoubtedly, the American Caesar Act sanctions on Syria will have negative repercussions and effects on the areas of the Autonomous Administration of North and East Syria. As these areas are still part of Syria and the currency in this region is still the Syrian pound, any negative effects on the Syrian pound in the rest of the region will be reflected on these areas and on the lives of citizens here. In addition to that, there are commercial relations between the areas of the Autonomous Administration in North and East Syria and between the areas under the control of the Syrian government. Therefore any negative impact on the Syrian economy will be felt in the autonomous regions as well.

RIC: How will this affect the everyday life of the people living in NES? Which political measures could ease the negative impact of the sanctions on the population?

Every deterioration or collapse in the value of the Syrian currency will be reflected on two sides: the first is a deterioration in the purchasing power of families and the second aspect is inflation, or the rise in the prices of different commodities. This of course will be reflected in the living standard of citizens and their ability to secure their daily needs of goods, food supplies, or even annual commodities.

In order to avoid these negative economic effects, the Autonomous administration must move in several directions. We have seen how salaries and wages have been raised, and this is a good thing in order to reduce the negative burdens on families. We must move in another direction, which is to work to secure the market needs of goods and different materials at low prices so that the population here can maintain their purchasing power.

In addition to securing these materials at reasonable prices, local production must be developed and we must take serious steps towards achieving self-sufficiency by making use of the resources in the region, whether energy or agricultural resources. We can switch to agricultural manufacturing and move from agricultural raw materials to the manufacture of these materials. For example, it is possible to set up factories for canning, storage and foodstuff manufacturing, related to the agricultural production that already exists in the region. This way, when there is no possibility of exporting the raw agricultural materials, they can be processed locally, thus maximizing the added value from them and exporting manufactured goods, not raw materials. For example, it is possible to open factories for pasta and biscuits produced with wheat crops, just as it is possible to expand corn cultivation in order to open plants for vegetable oils. We could also open cotton gins, to develop the agricultural sector. All of this would secure a market for manufactured agricultural products if the door to export is closed and import from abroad is closed. Thus, the import bill will be kept at a minimum.

RIC: Apart from the currency, which other economical and commercial ties bind NES to the rest of Syria? Which goods are being traded between these two areas?

There are commercial relations between the two sides. We witness these relations on a daily basis. Autonomous administration areas are rich in resources like oil, energy and grains, and they export and sell surplus to the areas of the Syrian government. On the other hand, we find that materials manufactured in Damascus, Aleppo, Homs and the rest of the areas are imported to the areas of the Autonomous Administration. There are a number of crossings between the two sides, in Manbij, Tabqa and the Salihiya crossing, in Deir ez-Zor. Through these crossings, a daily commercial exchange takes place between the two sides. The surplus from the Autonomous Administration areas is exported to the areas of the Syrian government, and manufactured goods and materials are imported from the Syrian interior.

However, the import process is not limited only to the Syrian [government-controlled] cities. We import also from Iraqi Kurdistan through the Semalka crossing and from areas under the control of the Turkish occupation through Manbij crossing and Al-Bab. Some goods are imported from those areas. All kinds of goods are being traded, food from the Syrian interior, as well as vegetables and fruits. As for the food commodities such as sugar, tea and oils, they are imported from the Kurdistan region. All the materials that the markets of the Autonomous Administration need and that are not produced locally are imported from those regions.

Of course, since the goods imported from abroad are traded in dollars, as a result of the currency circulating in the region, while salaries are being paid in Syrian pounds, all of these imported goods have a strong effect on inflation of the Syrian pound and the rise of prices. The greater the capabilities of the Autonomous administration to secure its needs of different commodities and consumables through local production, the more they are able to avoid the negative effects resulting from the deterioration of the exchange rate of the Syrian pound due to the Caesar law and the economic collapse that the country suffers from.

RIC: Which measures could the international community take in order to protect the economy of NES from the negative impact of the Caesar Act?

The regions of North and East Syria have just finished the fight against terrorism and ISIS. Therefore the American administration that imposed the Caesar Law has to exclude these regions from these sanctions, whether by granting them exemptions in order to export goods and materials produced here to the rest of the Syrian regions or by opening another crossing for import in addition to Semalka, as the US government can put pressure on the Iraqi side to open the Al-Yarubia crossing for trade between the Autonomous administration areas and the Iraqi side.

This would benefit both sides [ie. the US and the AANES]. Maintaining political stability in these areas requires the preservation of the current economic situation. We all know that in order to preserve the victories that have been achieved against ISIS, the livelihood of the population here must be secured according to a reasonable extent in order not to allow the sleeper-cells of ISIS or other parties to take advantage of what might be called social problems that can result from economic reasons. Therefore the American administration should provide support in several ways, whether material support, the exemptions that I talked about or direct financial support or technical support. The American side here, in order to maintain stability, can support infrastructure projects in these regions or open factories (small and medium) that would allow the region to achieve self-sufficiency.

The point I made with regard to the manufacture of agricultural products in this region could be supported with technological equipment coming from the American side, either with direct support or by facilitating their import. Perhaps we do not need America to provide us with this equipment but only to facilitate their entering from the Iraqi side or through the Kurdistan region. This could allow the establishment of such factories in the region on NES, and contribute to social stability and a decent living standard in this region, thereby blocking the door to the possibility of ISIS returning by exploiting the living conditions of people in order to activate its sleeper-cells.