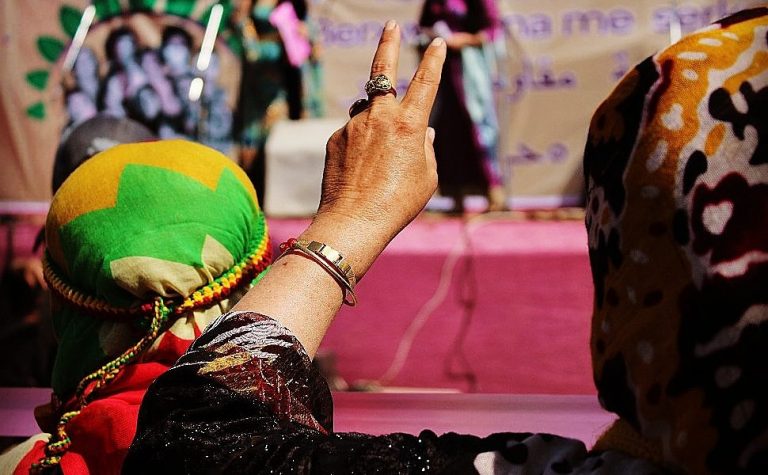 Kongra Star, which means “Star Congress” (in reference to the ancient Mesopotamian goddess, Ishtar), is the congress of the women’s movement in North and East Syria. It was first established in 2004 as Yêkitiya Star (Star Union), an underground organization that sought to organize women at a time of Ba’ath regime dominance over the area. Kongra Star operates on the basis of confederalism, with organizations, committees, and unions participating. Its vision is “to develop a free Rojava, a democratic Syria, and a democratic Middle East by promoting women’s freedom and the concept of the democratic nation.” In many ways it acts as the corresponding autonomous women’s body to TEV-DEM (Movement for a Democratic Society, the umbrella body for civil society).

“After living under oppression for hundreds of years, our society was heavily influenced by patriarchy and the male mindset. This is why Kongreya Star was established… Our work has a good impact, for example we provide women facing domestic violence with the opportunity to leave the home and gain financial independence.” – Hamida Umma Mohammed, Kongra Star of Shehba, Afrin region

Kongra Star makes decisions through a conference every two years, as well as devolving decision making power to its various committees and member bodies. It is organized through communes and councils, as well as through academies, unions, political parties, cooperatives, associations and committees. Women organize as Kongra Star within the structures of the Autonomous Administration as well as through other structures such as the Syriac Women’s Union (for Syriac-Assyrian women) and in an independent capacity. Kongra Star organizes its work through the following committees: Diplomatic Relations, Participation, Media, Education, Municipalities & Environment, Justice, Culture & Art, Social Affairs, Political Affairs, and Women’s Collective Self-Defense Forces.

Kongra Star organizes and supports a wide range of activities and initiatives at all levels of society including demonstrations, training programs, participation in international partnerships, and setting up cooperatives. Although it has its roots in the Kurdish movement, steps are being taken to include women of all ethnic groups living in North and East Syria. There have been challenges in establishing a shared vision and practice of women’s liberation across all of society, but there have also been numerous tangible successes.

“We need to change the capitalist mentality – which is a patriarchal mentality – which seeks to make profit out of everything. But we cannot allow woman to become independent from man by putting herself in an exploited position [of employment]. It is not about integrating her into a capitalist system through work, it’s about building up a new economic system.”
Arin Khalil, Women’s Economy Committee in Qamishlo

In different sectors, women developed autonomous structures and associations which are linked principally to Kongra Star, but also sometimes directly to the Autonomous Administration or SDC (Syrian Democratic Council). One example is ‘Sara,’ an association that campaigns against violence against women and works to change social perceptions and educate society. Another example is the Women’s Foundation (Waqfa Jin), which is establishing kindergartens, orphanages and specialized schools for disabled children. They also offer practical education to women in vocational skills.

A lot of work is also being carried out in the economic sphere: the Women’s Economy Committee of the Autonomous Administration and Kongra Star (Aboriya Jin) has supported the creation of a number of women’s cooperatives, allowing women to learn skills and become financially independent. These include bakeries, restaurants, tailoring workshops, factories and agricultural cooperatives. It is envisioned that women-only businesses will develop a mode of working different from more dominant, capitalist ways of working.

An interesting development in North and East Syria has been the growth of Jineology, translated as ‘the science of women.’ Jineology is a branch of academic study that seeks to develop a methodology and epistemology of liberation through connection with society and ‘revolutionary principles.’ Since 2011, Jineology has been developed across the broader Kurdish women’s movement. Its stated aim is to counter the preconceptions and methodologies of science as developed by a dominant male mentality, and to “rewrite knowledge from the point of view of women”, with the ultimate objective of “the emancipation of society”. In practice, Jineology works through local research centers, institutions and academies, conducting research, developing ideas and running seminars and training programs.

Jinwar, a village exclusively for women and their children, was founded in 2016 near the city of Dirbesiye. The Jinwar project entails the creation of a village where women alone develop the culture, economy, daily life and governance. Women also built the physical village, using traditional, environmentally sustainable techniques to construct clay houses, a communal kitchen and gardens. The village feature a school, a medical clinic, an academy, a bakery, herd animals, a shop, vegetable garden and several fields for crops. Women organize village life through a council and take part in running the collective economy of the village. However, the women and their children had to evacuate the village for some time following the October 2019 Turkish invasion due to shelling and the proximity of Turkish-backed forces to the village.

North and East Syria contains a network of ‘Women’s Houses’ (Mala Jin) in all cities and many smaller towns. The Women’s Houses exist to solve women’s issues, particularly domestic problems such as violence, marriage and divorce, and oppressive behaviors in the household.

This article is an excerpt from our report “Beyond the Frontlines – The building of the democratic system of North and East Syria”.