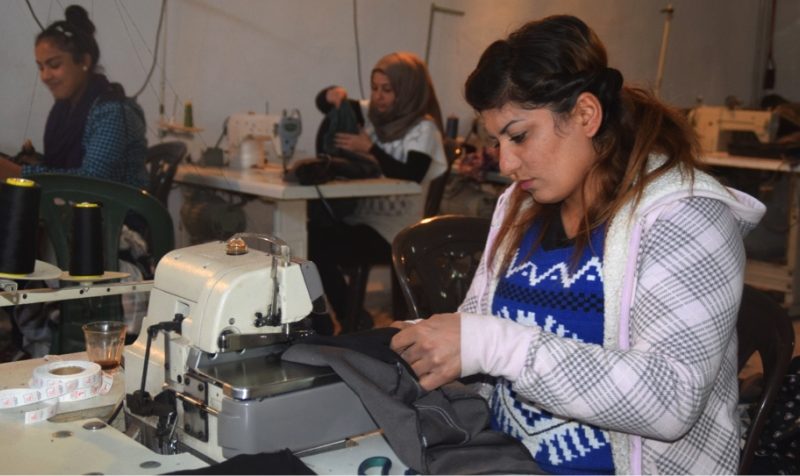 Zahra Shexo bends over her sewing machine and meticulously, but expertly allows the course material to run through her fingers and under the pointed needle of the machine. The sound of over a dozen women’s laughter and conversation intermixes with the repetitive mechanical sounds of the sewing machines in the large room. The sewing room is a Kaleidoscope of different coloured materials, samples, threads and other necessary sewing items. Zahra is the current administrator of the textile co-operative Amargi in Kobane city.

For outsiders, the Rojava Revolution came to international attention in 2014 when the terrorist organisation ISIS (Islamic State of Iraq and Syria) attempted to take over Kobane city. An epic battle ensued. Outnumbered and lacking the heavy weaponry of their opponents, the tense resistance played out with the Kurdish YPG-YPJ fighters successfully defending and liberating Kobane on the 26th of January 2015. However, even before the uprising against Assad in 2011 during the Arab Spring wave, and the subsequent Rojava revolution in 2012 which attracted ISIS’s wrath, efforts were being made in the Kurdish north, known as Rojava, to implement networks of grassroots assemblies. The Amargi co-operative is one such example. Established over 6 years ago, the co-operative has been running consistently with the aim of providing women in Kobane with economic opportunities. Currently, according to Zahra, 17 women work in the co-operative.

The networks of grassroots assemblies and co-operatives that the people of Rojava are carrying out is based on the radical model of Democratic Confederalism founded by the imprisoned Kurdish leader Abdullah Ocalan and inspired by the works of the US ecologist Murray Bookchin long before 2011. Ocalan’s ideology of Democratic Confederalism includes three pillars: a democratic and autonomous society, ecological sustainability and gender equality. Within this framework, the economic model in Rojava is an alternative economy based on a social communal model. Co-operatives are part of the autonomous networks of grassroots assemblies with the objective of achieving a free life for all envisioned under this model.

Co-operatives are locally created, autonomous and democratically-run enterprises, aiming to allow people to meet their economic needs while providing the community with affordable alternatives. For instance, the women’s co-operatives often attempt to produce locally based and sourced, ‘hand-made’ and ‘home-made’ products which are seasonally available. The products of the co-operatives are often sold in the market at a lower price resulting in higher demand for the items.

Co-operatives are also exercises in democratic practices with the fundamental principle of “one member, one vote”, with each member profiting from the co-operative equally. This is in contrast to the investor-based system within the capitalist market where profit is based on the level of ownership of a business. Across the world thousands of co-operatives currently operate in over 100 countries, including in the UK, Spain, Canada, America, India, and many others. But in Rojava, the vision is a little different.

In Rojava, the significance of the co-operative system lies in efforts to democratise all sectors of society, including the economy. For this reason, creating alternative means and avenues that allow traditionally marginalised groups such as women to actively participate and engage with the market is an essential aspect of the radical democratic model. Further, this alternative model allows society to bring the lived experiences of democracy to the grassroots level by devolving and dis-empowering the capacity of the state to control and direct the market. But co-operatives allow the community to create jobs on the local level, produce locally-sourced and generated products, create jobs that do not require specialised skills and allows unskilled workers to gain skills and access to the market. Additionally, considering the current war situation and its impact on the economy of the Rojava region, in combination with the ongoing embargo placed by Turkey into Rojava, ensures that the co-operative system address an ongoing problem within the community. The cantons within the Democratic Federation in Rojava and North Syria have economies based on agriculture and animal husbandry. For this reason, attempting to address issues of unemployment, encouraging women’s participating in the public sector, promoting an alternative radical economic and social model based on the protection of the ecological base of society, the co-operative is a natural form of organisation and economic development, while also radically challenging the patriarchal and capitalist foundational basis of society.

In Rojava, the women’s co-operatives are established and supervised under the leadership of the women’s umbrella organisation Kongreya Star (Star Congress). The women’s movement was established as far back as 2005 while the region was still under the authority of the Assad regime. Due to this established foundation, when the Rojava Revolution started on the 19th of July, 2012 the women of Rojava had already gained experience in self-organising, and have since played a continuing leading role in organising society. They run ideological programs, councils, communes and co-operatives across the education sector, economics, self-defence, social issues, justice, politics, ecology, art and more. The creation of women’s co-operatives occurs under the leadership and support of the Kongreya Star, with each canton having its head-quarters, with each city within the cantons containing its own Kongreya Star office and staff. Kongreya Star co-ordinates with the Women’s Economic Board to support the establishment and ongoing running of the co-operatives.

According to Midya Qamishlo, an agricultural engineer and representative for the Qamishlo Women’s Economic Board, around 10 women’s co-operatives exist in Qamishlo city alone, with a focus on the textile, catering, dairy and agricultural industry. Midya notes that “women can earn 30,000-45,000 ($80-90) per month.” She states further that the women’s co-operatives “allow women to gain confidence and to support their family during the current economic crises. However, of more importance is the role that co-operatives play in collective efforts at achieving a free life and more specifically free women. They help to challenge the patriarchal structure of society by ensuring a level of equality is established. When women re-take their traditional role of being major contributors within the economy men are challenged to view and revise their perception of women’s role within society.” Some of the more well-known co-operatives are Warshin Co-operative which is a textile based co-operative. Shilêr focuses on dairy products. Dastar consists of conglomerate of small co-operatives creating conserves. Adar is a women-run bakery co-operative.

According to Midya, a new type of co-operative is being created and has moved on recently from the early planning stages. These co-operatives involve women’s-centred markets consisting of stalls led and run by women selling their own home made and hand-made items. The objective is to create such markets in every city within Jazira Canton in the cities of Qamishlo, Amude, Dirbesiye, Hasakah, Serekaniye, Tirbespiye, Rimelan, Derik, and Til Tamir. Currently the Women’s Market in Derik is close to finishing, while the plans are being drawn and land allocated in Qamishlo and Amude.

This project is indicative of the effort of the people of Rojava to change the entire foundation of the economic situation by bringing women into every aspect of the economy. Co-operatives within the Rojava system allow the community to veer away from traditional capitalist practices such as profit-focused objectives, encourages the labourer’s independence from the traditional employer and the resulting exploitation of wages and labour, ensures that women participate in the decision making processes, produce a place where people can organise and develop their ideological consciousness.

As a result of the ongoing war with ISIS, the continued clashes with the Assad regime, the ongoing bombardments by the US, Russia and the regime, the recent invasion of Syria by Turkey and annexation of Jerablus with the help of the Free Syrian Army factions including various Islamist terrorist groups, thousands of people have been displaced with hundreds of villages, farms and homes destroyed. Rates of unemployment began to rise in the region. At the same time each canton has received thousands of refugees from places like Manbij, Raqqa and Bab which has placed greater pressure on the local economy. Supporting a community under embargo, with neighbours that closed their borders and prevented even humanitarian supplies from crossing into the area has ensured that locating alternatives is a necessary survival and self-protection policy.

For this reason large scale co-operatives are also an alternative proposed under the new system. One of the biggest co-operatives that currently operates is located in the area of Derbesiye, called the Kasrek Co-operative Society, which consists of several projects, mostly focusing on agricultural and livestock output. The project involves 4,000 people. Each member participated in the project and bought ‘shares’ by contributing about $100 to the project. Over 37,000 acres of communal (government) land was allocated to the project and the co-operative has already started planting legumes such as wheat, cumin, beans, chickpeas and lentils. Of the allocated land, 25 acres are allocated for the growth of vegetables, including greenhouses for tomatoes, parsley, cucumbers, garlic, onion, radish, lettuce, spinach and carrots, among others. Other aspects of the project includes areas allocated for raising livestock, as well as fruit trees including olive trees. 1,000 heads of sheep have already been purchased with the objective of increasing the number of the livestock to establish a dairy factory in the future. To ensure that the project continues, the co-op has purchased agricultural machinery, as well as establishing a veterinary clinic.

Another large-scale mixed co-operative is Hevgirtin located in the city of Tirbespiye, Cezire [Jazira] and was launched over 6 months ago. The cooperative has branches across the Cezire canton. The goal of the project is to supply the community with cheaper sources of food and other daily needs, while being run and organised by the community itself. In Hasakah the first women’s co-operative was established in June 2016 with the first project involving cooking muhammara ─ a red pepper-based sauce. There is often co-operation between the various co-operatives, such as the Hasakah co-operative sending their items to be sold at the Hevgirtin co-operatives. The Amude co-operative guarantees subsistence for over 2,000 families.

The co-operative model supplements the needs of the communities within Rojava, but the aim of the leadership of the region long term is more complex. During the regime period, just as is currently the case with northern Kurdistan in Turkey, the Syrian government engaged in a deliberate policy of underdevelopment, especially in the areas of infrastructure, education and health, which has caused ongoing economic dilemmas. All major industries, factories and producers were located outside of Rojava in the predominantly Arab dominated areas. For this reason, Rojava faces an ongoing challenge of developing its economic capacity long term. Further, considering the ongoing instability in Syria and the possibility of the conflict becoming protracted, retaining independence from the government and ensuring a well-functioning socio-economic status is essential for Rojava’s continuity.

The long term objective is to encourage industrialisation, however not in the traditional method of opening the national market to Western markets. Ensuring economic autonomy through the process of developing local and communal self-organisation processes is a means of societal self-defence within the market and Rojava.

Another major objective is to ensure that the Rojava region does not become resource-dependent, unlike south Kurdistan in northern Iraq, whose economy has come to depend entirely on oil and therefore foreign investors and markets. The current ongoing embargo and border closures have ensured that Rojava is unable to import oil, cotton, wheat, or other locally-produced natural resources. Likewise, aid dependency has been prevented as many NGOs and organisations, the traditional carriers of capitalism’s neo-liberal agendas, have been prevented from crossing and spoiling the region.

Perhaps in this regard, the ongoing border closure from Turkey and KRG into Rojava is a mixed blessing.

In the meantime, the Kongreya Star, along with the Economic Board, continue to establish more co-operatives as a means of self-protection of society and anti-capitalist resistance.