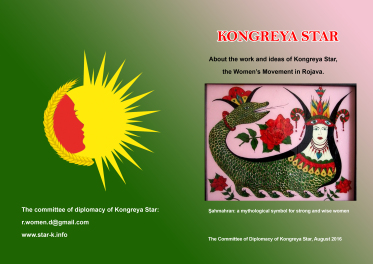 Kongreya Star is a confederation of women’s movements throughout the region of Rojava, a predominantly Kurdish area of northern Syria, also referred to as West-Kurdistan. While Kurds make up the majority of Rojava and most of the population is Muslim, the area is home to many different peoples, including Arabs, Assyrians and Ezidis, as well as a large Christian minority and many other smaller groups. One year after the Syrian Civil War began, Rojava declared its autonomy from both the Assad regime and the various other armed organisations active in the war.

The women’s movement in Rojava was founded in 2005 and originally called Yekîtiya Star. Under the fierce oppression of Bashar Al- Assad’s Ba’ath regime, women in towns and villages across the northern areas of Syria began to come together and organise themselves, creating a strong basis for the confederated women’s movement.

Because of their ethnicity, the majority Kurdish population of northern Syria suffered especially strong neglect and oppression under the Assad regime. Kurdish women, feeling this repression doubly as both women and Kurds, took the lead in organising and guiding the earliest years of the women’s movement. They learned from the experiences of the Kurdish Women’s Movement in other parts of Kurdistan (Bakur or southeast Turkey, Bashur or northern Iraq and Rojhilat or northwest Iran), active for thirty years before the founding of the women’s movement in Rojava.
When the democratic revolution in Rojava began on the nineteenth of July 2012, the women’s movement played an active role and ensured that women’s liberation remained a central point to the revolution. With the fall of Assad and liberation of Rojava, Yekîtiya Star was able to continue its work out in the open, becoming one of the main movements in the region. Over the following years, the organisation has grown to include more and more women of all ethnicities and religions. To reflect this increasingly inclusive reality, we decided in 2016 to change our name to Kongreya Star (Star Congress).

Since the revolution, our scope of activities has risen significantly as our capacity has grown. As the overall umbrella of women’s movements within Rojava, Kongreya Star plays an active role in organising women across all areas of life: education, culture and arts, economics, self-defence, social affairs, problem-solving and justice, politics, local government, ecology, press and media and international relations. It organises these areas of the society in the form of ten committees. These committees stem from the conviction that women need to organise themselves autonomously, as only a strong association of women can form the self-defence system necessary to confront the existing male- dominated institutions. Only when women are able to organise themselves, we believe, will they be able to challenge the current patriarchal structures and mentalities in order to build viable, sustainable alternatives. Without the liberation of women, a truly free society is impossible.

The strength and dedication shown by the women of Rojava throughout the conflict has led to this war being known as a women’s revolution. In both the heroic military defence against ISIS as well as in the building up of a new society that breaks with patriarchal traditions, women have embraced and championed an active role in every aspect of society. Kongreya Star views self-defence as a fundamental principle of defending, developing and improving the values of this ethical and democratic society. Self-defence therefore includes all spheres of life, not only the military aspects. As women have historically been the first group dominated in any society, we believe that women’s liberation is a central pillar in tackling all structures of oppression. While we fight for the liberation of women, we also address all other forms of oppression, albeit based on grounds of gender, ethnicity, class, or religion. Faced with the threat of ISIS, we believe that our greatest victory would be to build a society free from all oppression, in which those of different ethnicities and religions can live together in peace and democracy. This cannot be achieved through the continuation of the existing structures of nation-states, patriarchy and capitalism, which led to this crisis in the first place. Instead, we are establishing an alternative to the existing systems, a ‘third way’. This third way is called democratic confederalism. Democratic confederalism is based on the paradigms of a society built upon democracy, ecology and women’s liberation; a peaceful coexistence of all ethnicities and religions. It is a democratic model for direct and radical democracy, organised by the people from a grassroots level in communes and assemblies. This model, with its reliance on self-administration rather than a centralised, mono-cultural nation state, was developed by Abdullah Öcalan, the founder of the Kurdish liberation movement.

This system guarantees that all people are involved in the organisation of society and that the society is organised according to the peoples’ wishes and needs. In order to establish this new society, Kongreya Star and the women’s movement work closely with other social movements, including youth groups and political parties. Together, we have created communes in every town and neighbourhood and established the democratic self-administration that organises social and political life in Rojava. The Movement for a Democratic Society (Tevgera Civaka Demokratik, TEV-DEM) is the mixed gender umbrella movement for all civil society organisations developing in Rojava and has also played an important role as a parallel organisation of Kongreya Star. This brochure focuses on five fields of Kongreya Star: the organisation of the communes; establishing a communal economic system; providing education; the organisation of self-defence; and the development of the women’s science, called Jineology, along with the furthering of art and culture. Each of these fields is interconnected and in all of its activities, Kongreya Star adheres to the bottom-up principle of democratic organisation. Kongreya Star also follows the principle of plurality, including women of all ethnicities and religions. Together, we aim for equal participation and representation of women in all spheres of life, fusing the foundation of a democratic nation with the ideology of women’s liberation. Working throughout Rojava and Syria, Kongreya Star aims to be an example for the entire Middle East and to realise the women’s liberation revolution across the entire region. Struggling against patriarchy and the accompanying family structure, we aim for the free-union of woman and man and a democratic family structure based on mutual will. Building from there, our goal is to overcome all forms of domination, power, ownership and sexism to establish a truly free society.

Since the revolution, people in Rojava are building up a system of democratic confederalism in the three cantons, Afrîn, Kobanê and Cizîre. Democratic Confederalism is a system based on a network of small, local communes and assemblies in which people come together to self-organise their neighbourhoods and towns and to decide on their collective needs and concerns. This system is not based on the paradigm of the nation-state with its centralised, state organised democracy, but is rather a bottom-up, direct form of democracy. Communes and assemblies are the building blocks of this society, enabling the formation of a bottom-up democracy which represents everybody and places the needs of the people first. Every neighbourhood and town in Rojava is organised in a commune. Depending on the size of the village or town, the communes in Rojava range from communes of seven to two hundred persons. In the canton Cizîre there are approximately six-hundred and twenty communes. In the canton Afrin there are five hundred and thirty communes and for Kobanê there are unfortunately no statistics available. The building- up of the communes is still in a starting-phase, because of the war. In Qamishlo, the largest town of the canton Cizîre there are ninety-eight communes. The number of communes continues to rise as more neighbourhoods and villages organise themselves in this way. The communes come together on a regular basis to discuss and decide on collective matters such as the distribution of water and energy, solving social problems and the use of public space. The communes also organise training and education, such as first aid classes and reading and writing courses for adults. Every commune has an elected administration of at least three people that have a two-year term. When problems in society arise, the commune is the first place where these problems are discussed and the members try to solve them collectively. Only when issues cannot be solved at the commune level, such as larger scale infrastructure, they are relegated to another level of the self-administration, such as the city assembly or even the canton assembly. These assemblies consist of elected representatives from the communes. These representatives gain their legitimacy from the commune, guaranteeing the bottom-up nature of democracy.

There are two networks of communes: one in which both men and women are represented, organised under the umbrella of the Society for a Democratic Society, (Tev-Dem) and another which represents the women of Rojava. This network of women’s communes is the basis of Kongreya Star. Within the women’s communes, women are – often for the first time – encouraged to formulate their needs and desires and to collectively find solutions for them. In a society with a long tradition of patriarchy, where culture and religion have led both men and women to believe that women are not capable of taking any role or responsibility outside of the sphere of the home and the family, the creation of women’s communes has played a fundamental role in the emancipation of women. Now women play an active role in public life, with participation rates in the communes averaging between 50% and 70% and in some neighbourhoods reaching 100%.

There are five committees present in every commune, namely:

2. Health committee, which coordinates between the health services and the commune, but also provides education on first-aid, natural medicine and prenatal care. Through the work of the communes, several specialised women’s health care centres have also been established.

3. Economy committee, strengthening the communal economy by supporting the commune’s cooperatives, such as those that use the common agricultural lands.

4. Problem-solving committee, which specialises in mediation in cases of conflicts, such as those between neighbours or in the family. It works on the principles of reconciliation, compensation and mutual agreement. In the women’s communes these committees work together closely with the House of Women, an institute which is present in every large town or city, providing advanced conflict solution and juridical assistance to women in all types of conflict, including domestic violence.

5. Self-Defence committee, which is organised at the commune level by the People’s Protection Units (HPC). These units consist of members, both men and women, of the commune that receive specialised training for this task. They provide security for their neighbourhoods in times of heightened conflict and coordinate closely with the security forces. Communes form both the foundation and the safeguard of true democracy. They ensure that the needs of every community are met through collective decision making and they enable communities to organise collectively in whichever manner best fits their lifestyle. Based on the principle of self-sufficiency, communes play an essential role in building the basis of an ethical society, just as the women’s communes form the building blocks of the women’s organisation.

Other sections of this post were not included here for brevity. Read the full text here.