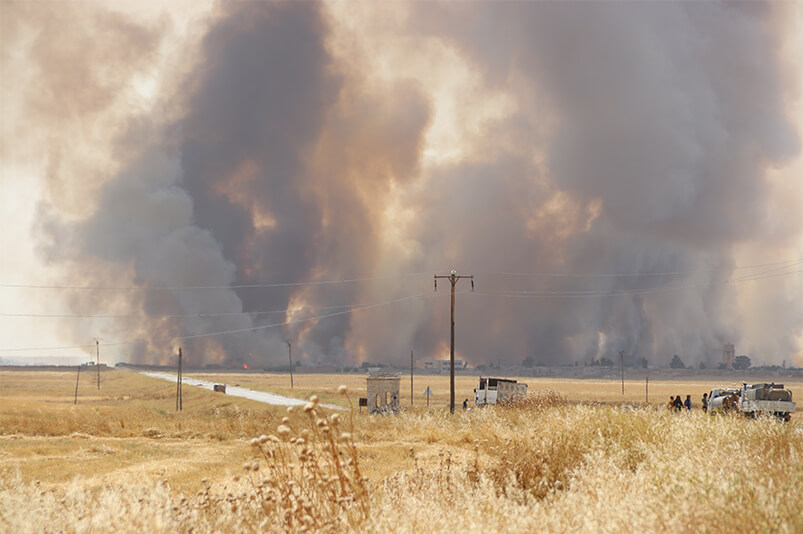 The ecological model of North and East Syria, a territory also known as Rojava, is based in the thesis of Murray Bookchin and his concept of social ecology. This model understands human beings as part of nature and promotes principles of egalitarianism, invoking the functioning of ecosystems, assuming that in nature, it is cooperation, symbiosis, and other forms of horizontal relationships that prevail. The Rojava model recognizes and rejects parallels between the domination of man over woman, of human being over human being, and of the human being over nature. With the goal of developing an environmentally sustainable society, the model proposes an economic system that defends the collectivization of natural resources and land.

Bookchin’s thesis has found a perfect fit in the ancestral past of the Kurdish people, proclaimed as heirs to the first civilizations that inhabited Mesopotamia, and in religions such as Yezidism, which, even today, worships elements of nature. For this reason, the cosmovision of the Kurdish people in terms of ecology goes far beyond that of simple western visions centered in aspects of recycling or sustainable mobility. The ecological model of Rojava is a call to live in consonance with the world that sustains us.

When the revolution took place in Rojava, various institutions were created, among them the Ecology Committee. The committee’s first days were not easy ones, given the difficulty in finding ecology experts: due to the area’s chaotic situation, many had fled. One of the people that participated in the creation of the committee is Alan Murad, currently co-chair of the committee, together with Hediya Mihmed. The political system, in all of its branches and levels, functions with its basis in a system of co-presidency, in that leadership positions, in the majority of institutions (save for women’s autonomous structures), are shared between men and women.

When territories such as Mabij, Raqqa, Tabqa, and Deir-ez-Zor were liberated from the hands of the Islamic State, the committee’s activities were extended to these regions, allowing them to train new people. Murad says that “we helped them to organize themselves, we taught them what ecology is and how our ecological committee functions. We taught that, with ecology, one can protect health, air, and land.”

Mihmed says that war has had a deep impact on the region. “It not only destroyed humans and infrastructure, but also nature. What’s more, it brought with it a mindset of destruction. In the areas that we liberated, we have had to work to change this mindset. It is not an easy task. It takes time.”

One of the first actions that they undertook was to swap out water-needy, short-life-span trees for trees that require little water and live longer. But they encountered many obstacles. Often, the oil that families traditionally used to warm themselves in the winter would run out. For this reason, the population had no other choice but to cut down trees, unaware of the negative impact on nature and their own lives. The Ecology Committee worked to halt this destruction, planting thousands of trees. “Now, when I see that the people plant trees on their own, it makes me happy,” says Murad. Currently, the Ecology Committee boasts a membership of 120 participants.

In order to understand the ecological vision, we must mention Abdullah Ocalan, the Kurdish leader incarcerated by the Turkish State for the last 20 years. Ocalan said that, “if you wish to follow my ideology, my path, then plant a tree and take care of it.” Murad tells us that there is a deeper meaning in this sentence. For him “when you plant a tree, just as a person, you put down your roots. This allows you to be connected to a land, to a territory, and to assume your responsibilities.”

Every April 4th, a tree-planting campaign takes place, coinciding with the birthday of Abdullah Ocalan, though it sometimes begins earlier in order to take advantage of the cool weather, given that Syrian summers are extremely long and hot.

Berivan Shilan, co-chair of the Department of Ecology and Local Issues in the Canton of Jezira, explains that once structures are created and urgent actions are taken, the committee focuses on changing people’s mindsets on how to take care of health, life, the environment.

In order to achieve this goal, they have organized seminars with the goal of raising awareness and educating the workers of the Ecology Committees of each municipality. These workers also participated in awareness-raising actions in their city councils, which are linked to the communes (neighborhood popular councils), spreading ecological awareness.

On March 23rd, 2020, North and East Syria officially entered quarantine. The situation extended into the middle of June, with a final balance of five confirmed cases and one death. Even so, the number is likely higher given to the lack of testing materials. The only machine available is in Sere Kaniye, an area under Turkish occupation since October 2019. At the beginning of April, another six machines were purchased by the Regional Government of Iraqi Kurdistan, helping to control the occasional outbreaks that took place.

Another point worth noting is the non-collaboration of the World Health Organization  (WHO), which was incapable of sending humanitarian aid to the area, save for cases in which material was sent directly to the few hospitals controlled by the Syrian regime. At the beginning of June, quarantine in North and East Syrian officially came to an end, though a new quarantine began July 13th, given to a surge in cases in surrounding areas. The first major outbreak of coronavirus in North and East Syria is underway, with at least 17 deaths and 320 confirmed cases and many more likely going undetected as the disease spreads uncontrollably through major population centers.

The economic siege imposed on the region and the preventive closure of border passages were the greatest guarantees for the virus’s containment. But these facts, combined with the existing economic crisis — owing to economic sanctions imposed by the United States on the Syrian Regime — has placed the economic fragility of Rojava in stark relief, showing it to be totally dependent on oil and trade with Iraq.

For this reason, the Autonomous Administration, the executive organ of North and East Syria, has created a plan to achieve self-sufficiency for a period of one year and fully cover, among other goods, the supply of vegetables. In order to see this through, women’s agricultural coops have been created, and the AA has incentivized the creation of gardens on private and public plots. This step marks an important change if we consider the current productive model, where wheat monoculture reigns.

Shilan explains that the war in Sere Kaniye had a very damaging effect on existing agricultural projects in the region, which had featured some of the most advanced cooperatives. Shilan explains that, “if we’re being sincere, Rojava’s economy is based on oil. This has a negative result on nature. That’s why we are working to change this direction. We know that the richness of our land lies in oil, but we must learn to use it better.”

A Special War for Turkey

In the context of the Turkish invasions suffered in this territory (Afrin 2018 and Sere Kaniye 2019), special methods of war have been used to complicate the lives of inhabitants of North and East Syria. In the ecological field, the most flagrant example involves water: Allouk, the central pump station that sends water to the province of Jezira, is situated in a territory under occupation. It is for this reason that Turkey frequently leaves more than half a million people without water for several days at a time, triggering the expected consequences of such an act in the context of a global epidemic.

Separately, the rivers of Rojava, which run down from the mountains of Turkish Kurdistan (Bakur) are highly contaminated, and the dams constructed in Turkish territory significantly diminish their flow. The Euphrates river is the gravest case of this, given that it is the fountain of life for the cantons of Taqba, Raqqa, and Deir ez-Zor. Another effect of the Turkish invasion on Rojava are the fires lit by mercenaries at the order of Turkey, burning fields of wheat meant to feed the population for the rest of the year. This effect of this act is made worse by the lack of water mentioned above.

The participation of international volunteers in the field of ecology has occurred primarily through the “Make Rojava Green Again” campaign, promoted by the Internationalist Commune of Rojava. This campaign seeks to educate volunteers, create a network of international solidarity with Kurdistan, and practice ecology in projects with the civil population, municipal committees, and cooperatives of towns such as Carudi and Rihanîke.

For its part, the Qamishlo Ecology Committee has undertaken a number of collaborations with international activists without much success. “We asked for smartphones to help us with our work, but they never fulfilled our demand,” explains Murad. “This is the only help we asked for, because the rest we already have. We have our people and our ecological reflection.”