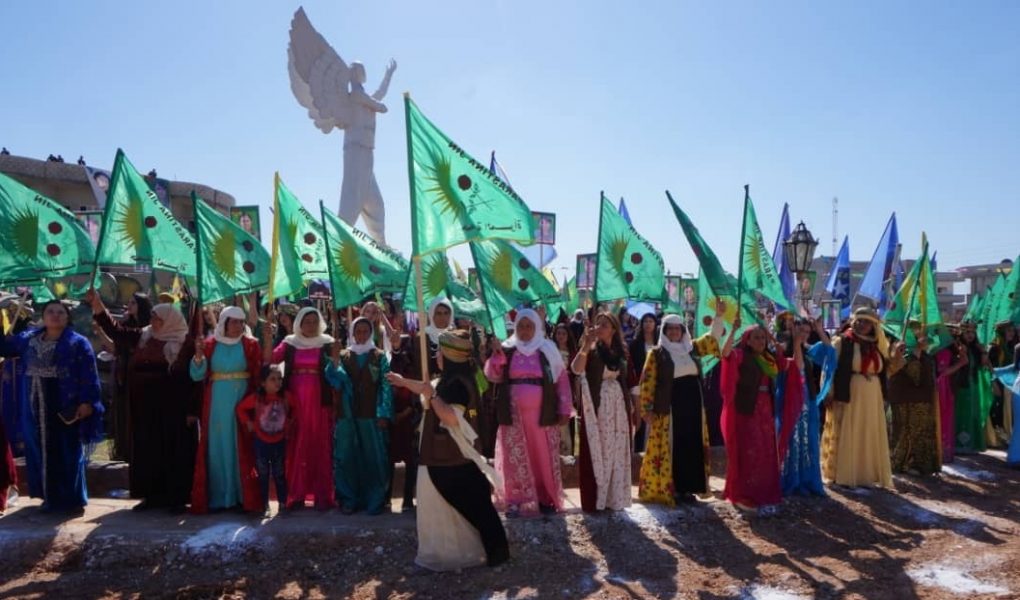 Over the last decade, the region has become a place where women unite and organise. Where women stand up together against feudal and patriarchal structures and build a liberated life. A place where a women’s revolution is taking place.

Through the revolution, women are organizing themselves in all aspects of life. With the principle of dual leadership and co-chair system in all communes and committees, the perspective of women’s liberation is considered in all decisions.  Women are educating themselves together in women’s academies, and with the Jineolojî, a new science is established from the perspective of women. Cooperatives are being set up so that women can learn new crafts and earn their own money in order to be able to provide for themselves independently of men.

Women’s voices are now significantly represented in the justice system and the development of a new constitution. Women not only play an equal role in the development of laws and have developed special legislation to defend women’s rights, but also adress social conflicts and issues such as sexual violence in autonomous women’s justice committees and find common solutions there.

In a village called Jinwar, women come together and create a living space for all those who long for autonomous forms of living together and want to build a liberated life together. Women also organize themselves as journalists and press representatives – in a press association.  In their own health centers, sustainable health care is provided for and by women as well as children. The YPJ women’s self-defense units, in which women organise to protect and defend themselves and society, have also become known all over the world for their determined resistance and struggle for liberation.

This place and its achievements have not become a dream but a reality. The revolution in Rojava and North and East Syria is a women’s revolution. For ten years now, women have been working every day to continue building the revolution while defending it from internal and external patriarchal attacks. Many have given their lives in this fight for freedom. We want to remember them as well, because with their steps they paved the way for this revolution.

As part of the “Women Defend Rojava” campaign, launched in August 2019 by Kongra Star, we want to strengthen our links between international feminist and women’s struggles with the women’s movement in North and East Syria. The revolution in Rojava, in northern and eastern Syria, gives us a lot of hope and inspiration every day for our local struggles as well as our common struggle for a free life. Because: the best protection against the increasing fascist tendencies is the overcoming of capitalism and patriarchy.

With various actions and festivities, we celebrate in different places, united in heart and common struggle, the 10th anniversary of this revolution, which is like a flower that has long since scattered its seeds all over the world. The resistance of women in Rojava and North and East Syria has long become a model for feminist struggles worldwide.