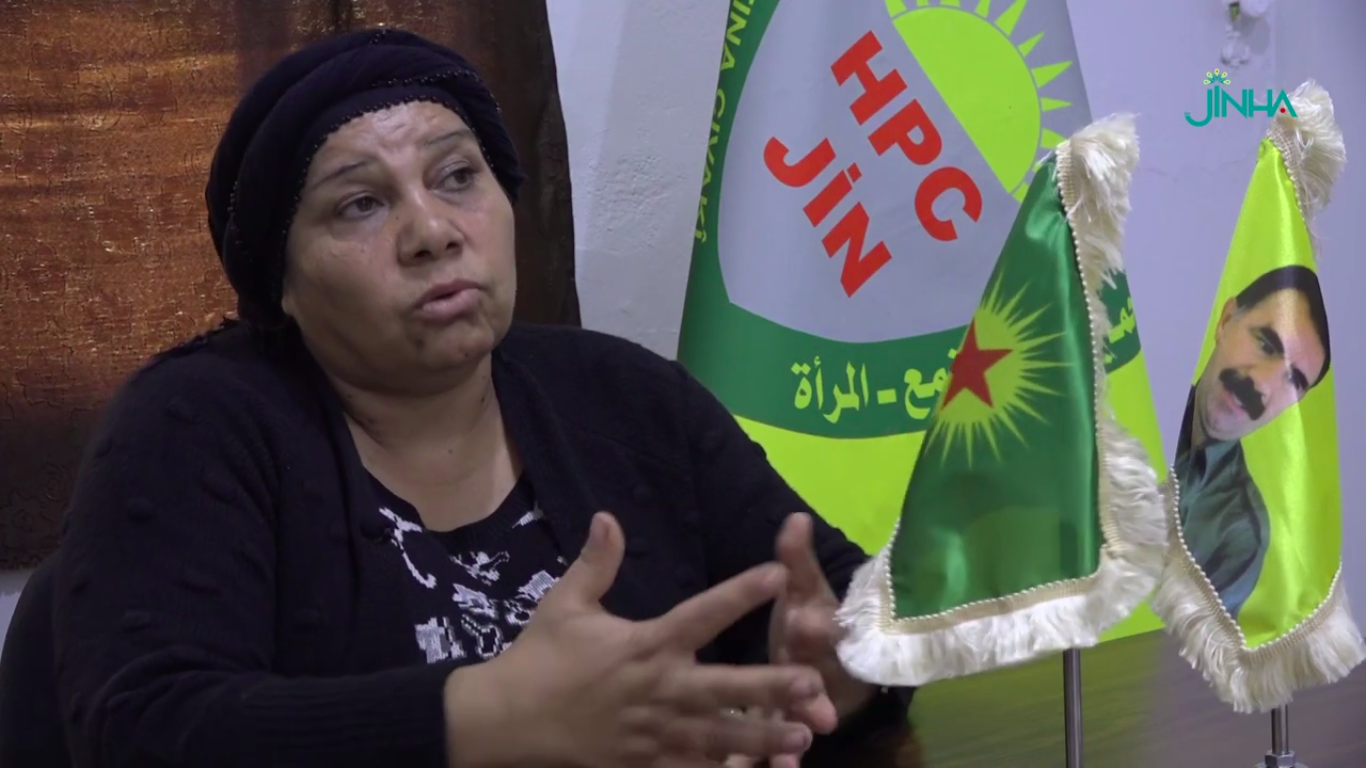 Part 7:  “HPC-JIN defends the reality, existence, and rights of women”

“Women and children have defended their lands since the beginning of humanity. Today, the members of the HPC-JIN defend their society and lands,” said Hediye Abdullah, the executive of the Women’s Social Defense Units (HPC-JIN).

The Democratic Nation System in NE Syria has brought many developments with it. After the Revolution in Rojava, women have founded many organizations and institutes and pioneered the changes in society. One of them is the Women’s Social Defense Units (HPC-JIN), which plays an important role in society. The HPC-JIN has shaped women’s self-defense forces on democratic confederalism. The HPC-JIN was established in 2016 as the self-defense units of women. Hediye Abdullah, the executive of the Women’s Social Defense Units (HPC-JIN), spoke to NuJINHA about the activities of the units.

Stating that the HPC-JIN was established in 2016, Hediye Abdullah said:

“Before the HPC-JIN was officially announced, we conducted our work in the commune and community in 2013. At that time, the asayish (security) forces weren’t established yet and we kept watch at all checkpoints. Before the revolution, the Baathist Regime ruled in Rojava Kurdistan. After the revolution, we took them out of the region and begin to defend our region ourselves. After the asayish forces were established, our name was not officially announced, but everyone knew us as patriots defending their own region. Our name was officially mentioned in 2014. The general congress of the HPC was held in 2015 but the HPC-JIN was established in 2016. After being officially announced, we opened our offices in all regions of NE Syria.”

“The members of the HPC-JIN defend their people and lands”

Speaking about the aim of the HPC-JIN, Hediye Abdullah said, “When a revolution takes place in a country, a war starts and those who are affected by this war are women. In Rojava, two revolutions took place. The first revolution is the armed revolution and the second one is the popular revolution. Men oppressed women in families due to the patriarchal mindset in society. We objected to this mindset and said that women should not be subjected to oppression and violence. We, as defense units, defend the rights, existence, and reality of women. At first, we do not allow women to marry at a young age. We learned the biggest lesson from Shengal, because if HPC-JIN had been there, more than 3,000 women of Shengal would not have been abducted. We expanded our organization in order to not allow women to be abducted again. Our people have taken strength from us. We think that defending our people and lands is a sacred duty. When Kongra Star was founded, many institutes were formed and one of them was the defense of women. Women have defended their society, children, and lands for centuries. Today, the members of the HPC-JIN defend their society and lands. All knowledge and experience of women were confiscated by the male-dominant mindset. Today we are freed from slavery and return to our essence. Today we defend ourselves and protect our existence.”

“HPC-JIN can defend women all around the world”

Stating that they have organized in all regions of Rojava Kurdistan, Hediye Abdullah continued to talk as follows:

“HPC-JIN has completed its organization in all cities of Rojava Kurdistan. Today, our organization is shown as a model organization all over the world. We can say that we have the power to defend all women all around the world because we have gained experiences from the women’s revolution. Today, we follow the legacy of our martyrs. We will keep defending our lands and women against all oppression and attacks and follow in the footsteps of our martyrs.”

Pointing out that the HPC-JIN defends all segments, Hediye Abdullah said, “We first defend women and then our people. We have conducted awareness-raising activities for women. Our revolution has been built on the democratic nation paradigms and all segments can take part in this system. The members of the HPC-JIN are Arab, Assyrian, Yazidi, Christian, and Kurdish women. We defend all segments in society.”

Stating that every woman in society is actually a member of the HPC-JIN, Hediye Abdullah said, “The women are prepared for all attacks against their society. The enemy targets women and we must defend women against all attacks. Women should defend their families and society because the plan and aim of the occupiers are to take control of our region and enslave women. All women should be self-aware and develop their self-defense.”

Welae El-Eli, member of the Women’s Council for Social Justice in Cizîr Region, spoke to NuJINHA about the works of the council.

After the revolution in Rojava, many women’s organizations and institutes have been founded.  Women’s Council for Social Justice is one of them. The goals of the council are to defend both individual and community rights. The Democratic Nation project is implemented by women, and women work paradigm of democracy, ecology, and women’s freedom axis and realize the democratic nation project. The council defends the rights of all peoples, cultures, and beliefs and serves as a model for the entire region and the world. It embraces all women with its knowledge and experiences about justice and becomes the only mechanism that advocates women’s rights. Welae El-Eli, member of the Women’s Council for Social Justice in Cizîr Region, spoke to NuJINHA about the works and activities of the council.

Stating that the Women’s Council for Social Justice was established in 2016, Welae El-Eli said:

“The Women’s Council for Social Justice was officially established on July 26, 2016, by the Kongra Star. It oversees all judicial and social institutions and supervises all of the women’s judicial institutions in NE Syria. It works coordinately with the Mala Jin (Women’s House), Peace Committee, and the Court of Justice. The council also monitors the implementation of women’s laws and women’s problems in justice institutions. It provides practical and ideological training, launches awareness-raising campaigns, and gives opinions the incidents and cases. The council holds a conference every two years. At the conference, the two-year activities are discussed and the members of the council are elected and the council determines a two-year road map. The council holds a meeting every month to discuss their works. The members of the council are also the members of the Board of Inspection, Judicial Executive Board, and General Social Justice Council.”

Underlining that justice is the conscience of the human beings; Welae continued to talk as follows:

“In order to secure justice, people must first listen to their conscience because justice is conscience and ethics. Justice is a concept and understanding that provides the balance between individuals in the whole community. Justice is also the attainment of human rights and the free life itself. Justice guarantees everyone’s right to equal life in society. A durable system and laws are essential to secure justice. This system should serve the interests of society, not the interests of the state. Judges should be honest to achieve equality in society.”

“The laws enacted for women defend their rights”

Welae also spoke about the laws of women.

“Many laws have been enacted and put into effect for women. But the most discussed laws were about polygamy, child marriage, and betrayal in marriage. After discussions, the articles of these laws were determined. In the beginning, we faced difficulties and obstacles for these laws, particularly the laws about polygamy and child marriage, because our society is still under the influence of that old traditional mentality. These laws were new since our society was based on tribe and religion. There are still difficulties and obstacles but we can say that these laws are mostly accepted by society. In order to ensure social justice and to change the reactionary mentality, our council should struggle against this mentality. Our duty is to fight against the dirty mentality against women’s lives and to build a life based on the Democratic Nation.”

Problems and their solution methods

Speaking about the problems and their solution methods, Welae said:

Emphasizing that women secure and build justice, Welae said, “For thousands of years, women organized society on the basis of social morality. Women secured and built justice. Unfortunately, after the building of the capitalist system, justice was taken away from women and removed from natural life. The cause of women is clear; they want to take their rights back and to change the patriarchal mindset. Society falls with the fall of women and develops with the development of women. Women must be liberated if a free and democratic society is wanted to be built. Women needed a council struggling for women’s rights. The Women’s Council for Social Justice works especially for women because women understand each other better. Women have played a big role and have proven themselves about social justice and they have struggled to secure freedom and justice.”