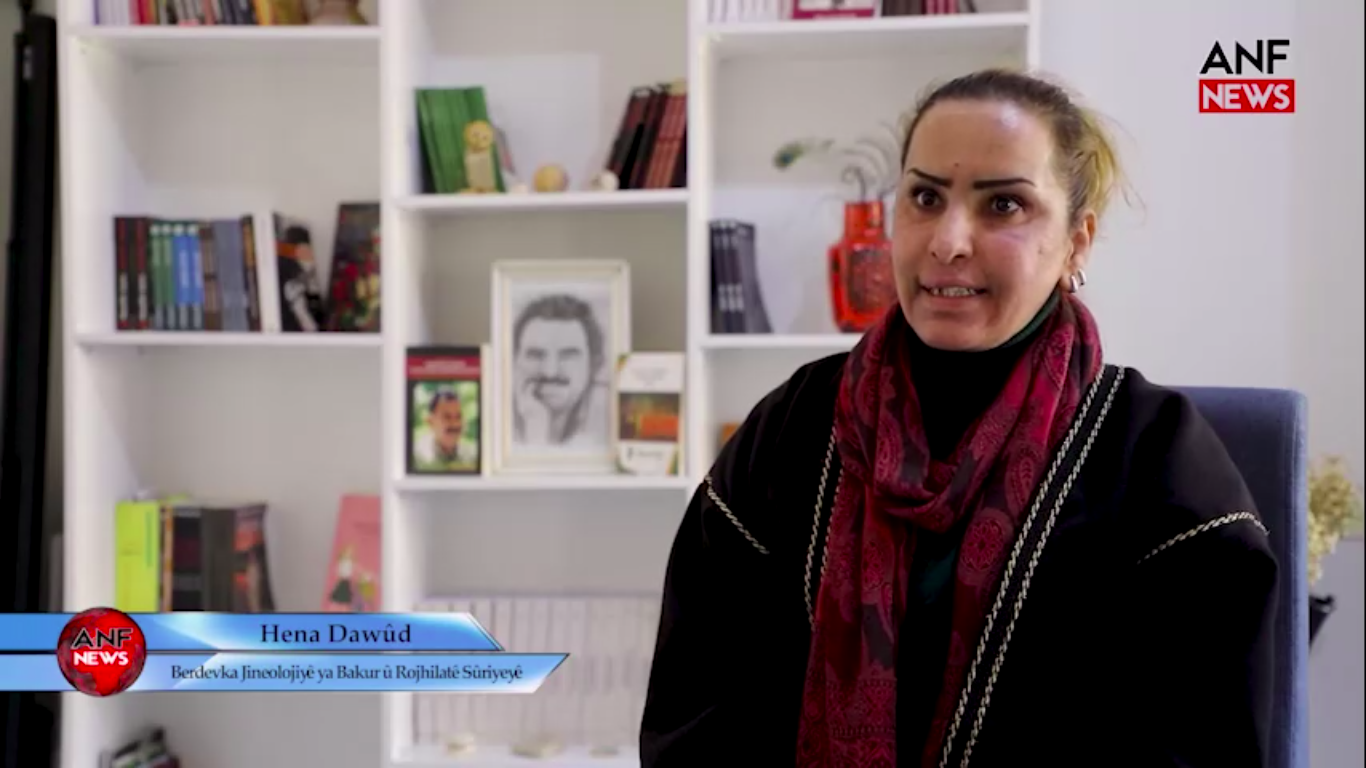 “Jineology organizes itself on the basis of many issues such as politics, economy, diplomacy and education. Through the communes, assembly, university, and media, we were able to reach out to women,” says North-East Syria Jineology Spokesperson Hena Davud.

In 2015, an organization dedicated to the science of women, Jineology, was founded in North-East Syria. It has now spread to every institution in North-East Syria, from academies to collaborative efforts in all sectors, and into every aspect of life.

Jineology approaches its studies from an academic standpoint. In the direction of requirements, academy cycles lasting a week or a month are opened from time to time. Jineology is also taught in all of Syria’s North-East academies. Jineology trains instructors for these courses, and the Jineology Committee prepares the resources they can use in the classes.

Since 2017, the Department of Jineology has begun training students at Rojava University’s Faculty of Social Sciences and Letters. It takes two years to complete a bachelor’s degree. The department is expected to become a faculty in 2023 once the essential infrastructure preparations are finished. Jineology is taught as a one-term course in all departments in Rojava, Kobanê, and eastern universities (Medicine, Political Science, Education Faculties, Agricultural Engineering, Petroleum Engineering, Press, and so on).

Since 2016, high schools have offered a Jineology course. The activities are mostly done with school students as story days.

Youth Movement and Xwebûn camps; Economic Committee workshops; Cooperative debates and workshops with the Democratic Islamic Congress; and joint discussions, workshops, research, and other studies in the sectors of culture, health, diplomacy, and education.

The construction of Jinwar Village began on March 10, 2017, and was finished on November 25, 2018. Jinwar Village, which was founded by women with their own hands, has constructed an ecological economy, a healthy society, women’s solidarity, and a collective and free life. Dirbesiye is located to the west of Jinwar Village. The Jinwar Assembly was founded on December 6, 2018, in the village which was built as a group of 30 earthen houses. Jinwar Academy, Uveysh Kindergarten, Ashnan Bakery, Jinwar Shop, Şifa Jin, and Farm are all located in Jinwar Village.

Hena Davud, the spokesperson of Syria North-East Jineology stated that “The academies explain subjects such as why the society requires a discipline like Jineology, the history and value of Jineology. The social structure of the Kurdish, Arab, Armenian, Syriac, and Assyrian peoples, as well as the features of women among these peoples, and women’s concerns and progress, are discussed. The topic of how women of nations could develop themselves and their attitude to Jineology’s truth is discussed. A sociological study is being carried out that is based on scientific self-reflection and re-acquaintance with oneself.”

Pointing out that all 7 centres organize themselves geographically, Hena Davud continued: “Each centre arranges itself based on the people’s characteristics and structural construction, but each centre views events and phenomena from the perspective of women. The centres of Tabqa and Manbij, Raqqa have a significant Arab population. The Arab people’s characteristics, habits, and traditions are considered. All women face the same challenges and are not significantly different from one another, although there are certain variances, albeit minor, amongst people. Jineology pays close attention to these distinctions and little subtleties. The women’s problem is the same historically, but different problems are faced over time, and Jineology’s management of the problems also changes from person to person; the search for ways is highly rich, taking into consideration the diversity of persons and circumstances. For example, it is looked into the influence of tribe and religion on Arab women, as well as how women are involved in circles and how to solve problems. Thus, our concentrations on Arab people are likewise different.

Women’s education gets a lot of attention. The subject of what problems Arab women face is definitely addressed. The psychology of Arab women is discussed in a broad framework, as is how an Arab woman should handle herself, how she should define herself, and how to search through history, where women lost and how they can regain what they lost, how they can express themselves again.”

THE INFLUENCE OF JINEOLOGY IN SYRIA

Hena Davud noted that efforts are being made to reach all women in Syria within the constraints of the situation, adding that “Jineology is also effective in Syria. We have contacts with Syrian women who are active in the region. Our ties are particularly strong in Damascus, Aleppo, and Suwayda. Because Jineology aspires to reach the globe, it’s critical to understand the sociology and psychology of Syrian women and to create solutions.”

Stating that Jineology attaches importance to panels and seminars, Hena Davud said, “It is critical to establish a discussion forum. Our primary goal is to educate Arab, Kurdish, Armenian, Assyrian, and Syriac women about Jineology. Of course, while we’re discussing this, we’re also trying to understand the realities of women by revisiting history. The women rediscovered and acknowledged their lost past, and used it to great effect. These trainings have produced excellent benefits for women.”

EVERY CENTER HAS ITS OWN INITIATIVE

“Each centre organizes itself within itself. Every centre has the initiative to organize, and every centre has a system such as education, diplomacy, economy, health, press, archives,” said Hena Davud, adding: “Jineology focuses on diplomacy and strives to reach out to women in other cities. Within the North-East Syria Women’s Council, we have relationships with women’s organizations. It is critical that we connect with women’s organizations that represent a variety of viewpoints. Jineology courses and faculties are also available at universities and schools. The Jineology Department piques the curiosity of both men and women. Jineology, which was formerly only available as a department within a faculty, is now accessible in almost every faculty.”

FROM POLITICS TO THE ECONOMY

Noting that Jineology organizes itself in many subjects such as politics, economy, diplomacy and education, Hena Davud continued, “Through the commune, assembly, university, and press, we were able to reach out to women. First and foremost, it is assessed in which field each woman will be more productive and competent. The plan is made according to which field a woman expresses herself better in or according to her needs. Women in the economy and women in education have different areas of specialization, thus there is bound to be a disparity. Each section is unique in its own right, but they are all connected and treated as a whole.”

Noting that Jineology has published many brochures and books, Hena Davud said, “For the promotion of Jineology, we have brochures and publications. The thoughts of Leader Abdullah Öcalan on Jineology were brought together. On suicide, the sociology of Arab women, and the politics and sociology of immigration, extensive studies and booklets were published. The book Sociology of Women from Rojava was recently published.”

Hena Davud stated that men’s workshops were also established in response to the demands, and that the topics were decided based on the organization of each city, and that talks were held. Hena Davud explained that each institute conducts significant research on beauty and ethics, narcotics, prostitution, and corruption, and that the results of these studies will be used to benefit society.