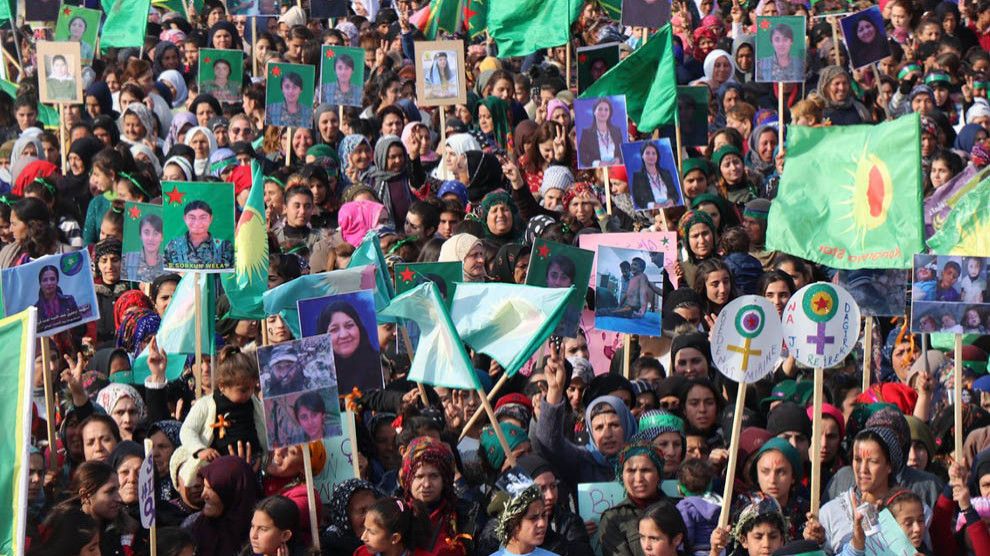 In North and East Syria, a democratic women’s revolution has become reality. Under the most difficult conditions, an alternative to patriarchal and state structures was created according to the idea of Democratic Confederalism. This alternative was built in a region that is under a strict economic embargo. North and East Syria is under continuous attacks by Turkey, but the women’s revolution still manages to develop further in practice. The work that women have done in recent years and even before the revolution in Rojava began, has changed many things. Women are no longer to the same extent limited to a classical life consisting only of domestic work in their own families, but participate equally in public life. This is the result of decades of heroic resistance and struggle by women’s movements, such as Kongra Star, which organized women even before the revolution under the name of Yekîtiya Star. Women’s heroic resistance most recently can be seen in the person of Awaz Urmiye, who courageously opposed ISIS in Heseke when it attempted a prison break out earlier this year by launching a large-scale attack on the prison in Heseke where thousands of ISIS prisoners are being held. Through the revolution in Rojava, it became clear, women play a vanguard role in all aspects of life, be it in the field of economy, politics or in the self-defense units YPJ. During the Syrian regime, women did not assume political roles or have decision-making rights. Today, they are equally involved. Especially in the most recently liberated areas, which are predominantly Arab, new steps are being taken. Women’s daily lives are changing, as the revolution and work in political organizations give women a whole new position in which they are able to defend themselves and participate in public life on an equal level. Since this is an ongoing process, many achievements that already existed are being further developed or filled with life. In many areas of life today, women play pioneering roles. For example, in the education system, women now play the decisive role in North and East Syria, as probably ninety percent of teachers are women. As a result of the changes after the revolution, children can see education in their own language. There are classes in Assyrian, Kurdish and Arabic, as needed. Women are also involved in the majority of cultural projects and institutions. It is often women and mothers who see the importance of preserving their own culture. Culture is another aspect that protects society from assimilation and genocide. The Movement of the Culture of Women of Mesopotamia in North and East Syria – Hîlala Zêrîn – organizes cultural projects and activities to preserve the identity and self-determination of the population. For example, one of the last projects was collecting old fairy tales to broadcast them on the autonomous women’s television station JIN TV. Every year, the Kongra Star Culture and Arts Committee organizes a festival centered on the culture and music of the region’s various populations. Women write songs about the revolution. Last year, a recording studio was reopened and two songs were recorded for Zeynep Kınacı (Zilan). In the future, an academy for women, for culture and art will be reopened.

Moral and ethical values, as well as the importance of one’s mother tongue, are defended by all population groups in the region, but there are also many things that Assyrians, Arabs, Kurds, Yezidis, etc. decide for themselves independently. Currently, the social contract is being discussed in North and East Syria and all population groups are involved in the discussion process. Four meetings have already taken place in which a proposal for the new social contract in North and East Syria was developed. This proposal will now be open for discussion. The proposal so far states that women will hold at least fifty percent of the political representation. Progressive rights for social groups have also been established; for example, the Yezidi religion is equally recognized for the first time. In North and East Syria, there is a special group of laws and resolutions designed to secure women’s rights. However, being able to put these rights into practice also means making them more understandable and accessible to people through education and discussion. Otherwise, some resolutions are not practiced everywhere by the population and, for example, marriages of minors still take place. But through education it can be made understandable, that marriage of underage girls is very harmful for the society and girls, because minors are not able to represent their opinions and decisions equally, so that no equal marriage can be formed. As a result, men in such marriages often become violent or there is an increase in divorces. However, due to war and displacement, such marriages occur more frequently. The families find themselves in existential dilemmas. That is why the women’s organizations play such an important role here, really reaching every woman and preventing such marriages.

In the last 2 years, more economic projects are finally being developed. This is very important because the region is under an economic embargo. Before the revolution, women were mostly responsible for the finances in their families, because they were considered to be fair and selfless, but for the work in agriculture and projects, there is need for concrete practical experience. Therefore, many projects did not achieve their goal in the beginning. However, those attempts that were not so successful became experiences that made it possible to achieve better results in the last two years. In the meantime, the Demsal cooperative is successfully growing vegetables in larger quantities and also has various other branches such as animal breeding and fruit plantations. There are many other cooperatives, sewing factories, bakeries for confectionery, which are part of the women’s movement. Especially in villages, the need for such projects is evident, because women often cannot leave their village from one day to the next or travel to work, so it is more necessary to build projects in their place of living. There are many women who are economically on their own, who may also have children. For them, economic projects are vital. In Cizire there is also a lot of potential for agricultural projects. Despite strong efforts to develop projects in the ecological and economic fields, the constant attacks of Turkey and its mercenary troops stand in the way. In Serekaniye there were huge fruit tree plantations, which were completely destroyed and burned during the occupation war.

In the predominantly Arab areas of North and East Syria, the Zenobia women’s organization was officially founded at the end of May 2021. The various women’s organizations throughout the region are independent of each other and come together under the umbrella of the Council of Women in North and East Syria. In this regard, Kongra Star supported the establishment of the Council of Women in North and East Syria as well as other women’s organizations through its decades of developed strength and experience. It is very important to develop a joint force to be able to bring about change. Women are also taking the lead in the field of society’s self-defense: from YPJ to HPC Jin, the societal women’s defense forces. Recently, HPC Jin’s work has evolved and continues to be in a process of change. The goal is for every civilian woman to play a role in the defense of her homeland according to her capabilities. For it is they who defend their own neighborhoods and villages and can play a crucial role on two levels: The defense of society against attacks from outside as well as to solve internal problems. HPC Jin has existed as a formal committee since 2016. Even before that, of course, civilian women had supported the defense of their homeland with all their strength. Even when IS attacked in Heseke last time, HPC Jin was on the spot.

The diplomatic efforts of women’s organizations in North and East Syria also continue to develop. In 2021, the second Middle East/North Africa Women’s Conference was held. Kongra Star was one of the organizers of this. There are also diplomatic works and women are organizing together in South Kurdistan and Lebanon. In this sense, women’s organizations in North and East Syria are trying to become a force that inspires change throughout the Middle East. There was furthermore a delegation consisting of three women from North and East Syria who visited the Basque Country, Catalonia and Madrid. They spoke with political institutions in the Basque Country and Catalonia, as well as feminist organizations and groups, and Women Defend Rojava committees on the ground.

So, in summary, the women’s revolution in North and East Syria is developing in all areas. This makes it all the more important to defend it against all attacks that aim to destroy the women’s revolution. In recent months, there have been attacks by Turkey at all levels. For example, Turkish drone attacks were carried out at the same time as the ISIS attack in Heseke. Turkey and ISIS share the same hostile, patriarchal ideology. In the lives of many women, both mean violence, organized killings, imprisonment, and torture. War, violence and displacement immensely worsen the situation of women as a result of Turkey’s wars of invasion. Violence is normalized by the constant attacks. However, even within the region, there are constant attacks on or acts against women. All these attacks target the gains of the women’s revolution. So there is a need for continuous resistance and organization to defend the gains of the women’s revolution. Only through this can the freedom of women and thus of the whole society be developed in everyday life.