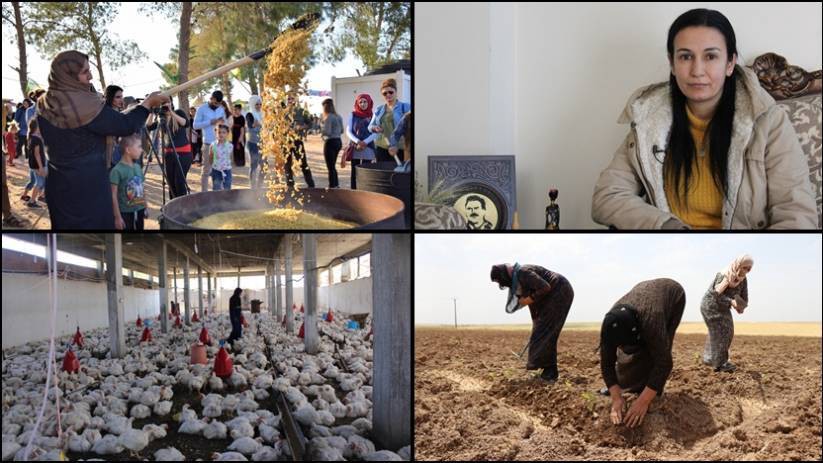 The Women’s Economy of North and East Syria develops projects and cooperatives so that women can create their own autonomous economy, without having to relying on men. The Women’s Economy, through its initiatives over the past few years, has tried to return the economy to its true nature.

According to the Women’s Economy, 16 women’s cooperatives have been established in the Jazira and Euphrates regions, employing 380 women. 58 women are working in greenhouses through the Demsal Project. In Tal Tamr, women cultivate 8,802 dunams of land. 11 women work in a livestock project, and 30 women work in a canning workshop. 78 women are working in an agricultural cooperative in the Washukani IDP camp. This year, 600 women took their places in cooperatives and projects, and in North and East Syria overall, more than 1,000 women are now working in the Women’s Economy.

“The Women’s Economy has developed in North and East Syria”

Regarding the difficulties of establishing the Women’s Economy and its acceptance in society, Armanc said: “In 2015, the Women’s Economy was established for the first time in North and East Syria, with the goal of raising women’s culture—a knowledge that for years has been stolen by men—and establishing an autonomous economy. Such a system had not yet been established, but we started to introduce the women’s economy system and its projects to communes and society. Our first project was agricultural. We started like this, and now our work continues actively with hundreds of cooperatives.”

Recalling women’s excitement about economic work, Armanc continued: “In our society, it was very difficult for women to quickly liberate themselves from the rules and customs of social traditions. Through educational programs and family visits, women joined our work and established their own autonomous economy. Women quickly joined these initiatves. The projects that were carried out were very successful.”

“We want to highlight the color and work of women”

Armanc focused on their work this year and continued: “As a first step, we expanded our small agricultural projects, because this region is known to be suitable for agriculture. The Lavîn Workship produced clothing, and three Lavîn stores were opened in Qamislo, Dirbesiye, and Girkelege in Jazira Canton. A furniture workshop and showroom was also opened in Qamislo. Our goal with opening the furniture workshop was to show our society that not only men, but women also could do such work. We wanted to highlight the color and work of women in major cities. At the same time, this was a very good step for the women’s economy.

“New cooperatives have been established”

Armanc noted that the women’s economy had already gained ground in many areas and said: “According to the decisions made at our 2020 conference, our negotiations with Arab regions like Raqqa, Tabqa, Deir Ezzor, Aleppo and Shehba were expanded. The Women’s Economy now oversees 70,000 dunams of land, though 49,000 dunams of our cooperative land in Serekaniye and Gire Spi are now under occupation. New cooperatives have been established in the Euphrates region, Qamishlo, Derik, and Washukani and Serekaniye IDP camps. Our Demsal project was also expanded, adding 60 greenhouses. There are now 80 greenhouses in total, and many types of vegetables are cultrivated. Branches of the project have also been established in Derik and Manbij.

“They liberated themselves from the ISIS mentality”

Armanc stated that Arab women now run projects for themselves: “After their liberation from ISIS and the ISIS mentality, which targeted the power and knowledge of women, Arab women could work in the Women’s Economy and establish and oversee their own projects. Now, many Arab women work in agricultural projects, food production workshops, and projects producing textiles and cleaning equipment. Poultry cooperatives have also been developed.”

“We develop projects according to women’s needs”

Armanc said that women now create their own projects: “Kurdish, Arab, and Syriac women have reached a reality where they have their own autonomous economy and seek to strengthen it. Because of this, women now discuss projects amongst themselves, share them with us, and we discuss and implement them according to their needs.”

‘With the Rojava Revolution, women have created an economic revolution’

Finally, Armanc said that women have built an economic revolution through the Rojava Revolution. “Within the Rojava Revolution, women have carried out a revolution of the women’s economy, establishing their own autonomous economy through their own knowledge and understanding. In the coming year, we will reach those regions that we have not yet reached, and develop projects that better develop the color and voice of women.”