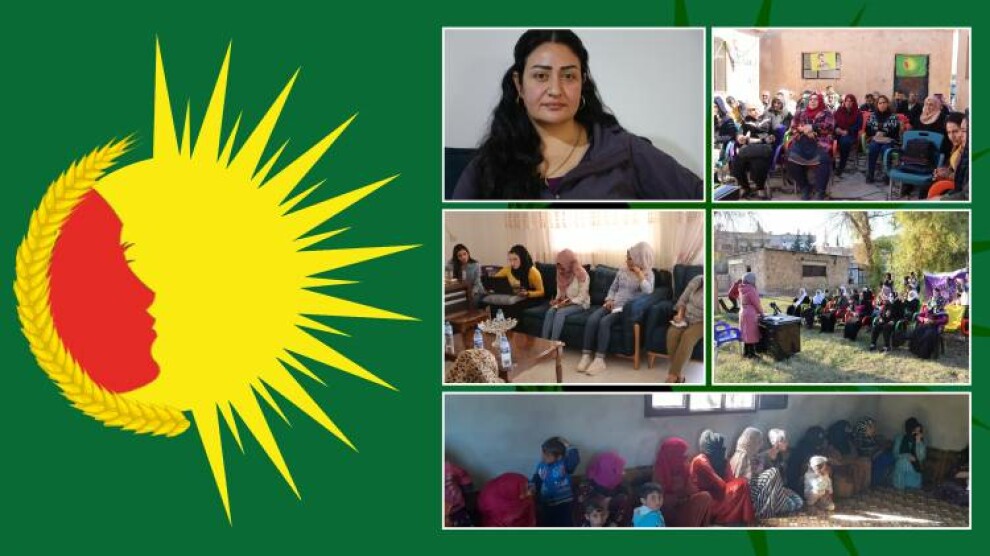 The Social Committee of Kongra Star has taken important social steps in the Revolution in Rojava, it has also become an area for educating and organizing the society. The committee has carried out activities for people of all ages. It has held meetings with families and listened to them in order to carry out awareness-raising activities for them. The Social Committee’s responsibility is to democratize families in society and to resolve the problems faced by families. Gulistan Eli, spokesperson of the committee, spoke to NuJINHA about the activities of the committee.

Social Committee of Kongra Star has taken important social steps in the Revolution in Rojava, it has also become an area for educating and organizing the society. The committee has carried out activities for people of all ages. It has held meetings with families and listened to them in order to carry out awareness-raising activities for them. The Social Committee’s responsibility is to democratize families in society and to resolve the problems faced by families. Gulistan Eli, spokesperson of the committee, spoke to NuJINHA about the activities of the committee.

“Social area is society itself. The Social Committee was formed to empower society. Our main aim is to get to know our society. We formed the committee in 2016. When it was formed, many organizations, institutions and committees took part in it. Women have revealed their will and existence through this committee. The committee works on many issues such as the disabled, children, women, violence against women and health. We have carried out activities about everything that affects society,” Gulistan Eli told us.

Stating that they have carried out works for children, Gulistan Eli continued to talk as follows:

“The committee raises the issues behind the scenes in society and works on them. We are responsible for society. Our Social Committee has a children’s department. This department especially focuses on the rights of children in society. As it is known, children in the Middle East are deprived of even their fundamental rights. We try to save children from begging. We try to end child labor. Unfortunately, children are also subjected to violence. Children have rights in the Middle East in law, but unfortunately, in practice, they do not. We have carried out awareness-raising works for families about the rights of children. The members of the department visit families and talk to them about how children are important. The children’s department has organized itself in communes and neighborhoods. If there is gender discrimination in society, the children are also affected by it. We have held workshops for children to educate them. Now, the children know their rights. Our children’s department aims to spread its works across NE Syria.”

“We want to change the mentality”

Stating that they want to build an ethical, political and ecological society, Gulistan Eli said, “Where there is a state, society doesn’t improve. Today, state politics is kept alive in homes. We can say that families are like states. We see that women do not have rights at home, and men behave as dominant. Governments rule states, and states rule families. The main aim of the social committee is to change this mentality. We have gained many achievements thanks to the revolution in Rojava. But our society needs many activities to change this mentality. We need to solve all the problems in society and create change and transformation in it to complete the revolution.”

“Women become aware of their rights”

Emphasizing that men are dominant in families and that many women are oppressed by the men in the families, Gulistan Eli said:

“After the revolution, women became aware of their rights. Before the revolution, women were subjected to violence because of the male-dominated mentality. Men’s attacks on women stem from state politics. Violence is increasing day by day in regions occupied by the Turkish state such as Afrin and Sêrekaniye. Why? Because they want to give a message to the resisting women. The first women were attacked in Afghanistan because the Taliban wanted to control them. Despite all the attacks and pressures, we keep struggling for our existence.”

Highlighting that they can defend society as much as they change the mentality of society, Gulistan Eli said, “We can defend society through the Democratic Nation paradigm. We should educate society and give it responsibilities. Society must be able to defend itself when it faces an attack. Society should stand by their soldiers and protect their region along with their soldiers. Many people died while trying to go to other countries. Many of them have already returned to their region. In a possible attack, everyone, including young and old people, is now ready to protect their own lands. We have held education programs for young people, who are the future of their society.”

“They have developed many projects”

Stating that they have carried out many activities for people and projects for children, Gulistan Eli said, “We want to build a better life for children. We have also developed many projects for women. Our aim is to provide support to women, who were subjected to violence. We want to build special spaces for women. As the Social Committee, we aim to found academies soon. We have carried out projects to empower women’s economy. We have also developed projects for the people with disabilities. We aim to open a place for the people with disabilities soon.”

Part 6: Diplomacy Committee makes its voice heard all around the world

“Kongra Star diplomacy has carried out important work in making the Revolution in Rojava known all around the world and increasing support for Rojava,” said Ruken Ehmed, member of the Diplomacy Committee of Kongra Star.

“The committee makes the Kurdish cause known all around the world”

Stating that they make the Kurdish cause known all around the world through the committee, Ruken Ehmed said:

“After the Revolution in Rojava, diplomatic work and activities have become more important. The people needed to forge public opinion at the international level. The Kurdish people, the pioneers of the Revolution in Rojava Kurdistan, needed to make the struggle in the region heard all around the world. We, as the Diplomacy Committee, have established diplomatic relations at the international level. We have already established diplomatic relations in Europe to make the Kurdish cause known. We can say that the resistance in Kobanî and the death of Arin Mirkan opened the door of diplomacy and made the women’s revolution known. Making the revolution and resistance of people known caused pressure on states and paved the way for a power like NATO to intervene in the siege of Kobanî. This intervention or support didn’t happen by itself, it happened because the diplomatic work forged public opinion at the international level. Social diplomacy has developed, particularly in the 21st century. The struggle of the people is shared with people through diplomacy. Through the diplomatic works and activities, we have established relations with many women’s organizations and institutions and it paves the way for forming an international network.”

“The Diplomacy Committee was formed in 2016”

Stating that the Diplomacy Committee was formed in 2016, Ruken Ehmed continued to talk as follows;

“Before the Revolution in Rojava, we didn’t carry out any diplomatic work or activity. There was the Assyrian Women’s Union but it worked with the Baathist Regime. In 2005, the Yekitiya Star was founded and began to work in Rojava Kurdistan. After the Baathist regime killed Kurdish children at the football stadium in Qamishlo on March 12, 2004, Yekitiya Star’s organization grew, and then it became Kongra Star. Kongra Star expanded its works across Rojava. It consists of 12 committees. The Diplomacy Committee is one of them. The committee was formed in 2016 to establish diplomatic relations at the international level. After the liberation of Kobanî, Autonomous Administration was declared. The Autonomous Administration paved the way for diplomacy. Kongra Star is the first umbrella organization of women to take part in politics, society, administration, and diplomacy. Many regional and international delegations that visited the region got to know more about our revolution and the danger level of ISIS through Kongra Star. At the beginning of the revolution, the armed struggle was at the frontline, but after the declaration of the Autonomous Administration, many women took part in it. Women’s role in the military, politics, and diplomatic works is very important for us. At the same time, our revolution opened its door to internationalist women and many people joined our revolution. The Diplomacy Committee has reached many women all around the world and we have waged a joint struggle.”

“We have relations with international women’s organizations”

Speaking about their relations with international women’s organizations, Ruken Ehmed said, “During the attacks on Serêkaniyê, we opened a representation office in Europe and asked support from our friends living in Europe through this office. 25 committees were formed in 12 countries with the “Save Rojava” slogan. These committees have supported our revolution and organized protests and campaigns. We have been working across the Middle East for about two years. We joined the international women’s march. We are a member of the IWA. We have carried out a joint struggle with the Middle East Women’s Initiative (MEWI) consisting of 35 women’s organizations. We are in touch with the Rewaya Jin Organization in Afghanistan. We established the diplomatic information center about two years ago. This center has prepared reports about the massacres and attacks against women by the Turkish state, Turkey-backed factions, and ISIS in Afrin, Serêkaniyê, and Girê Spî. We share the reports on social media platforms.”