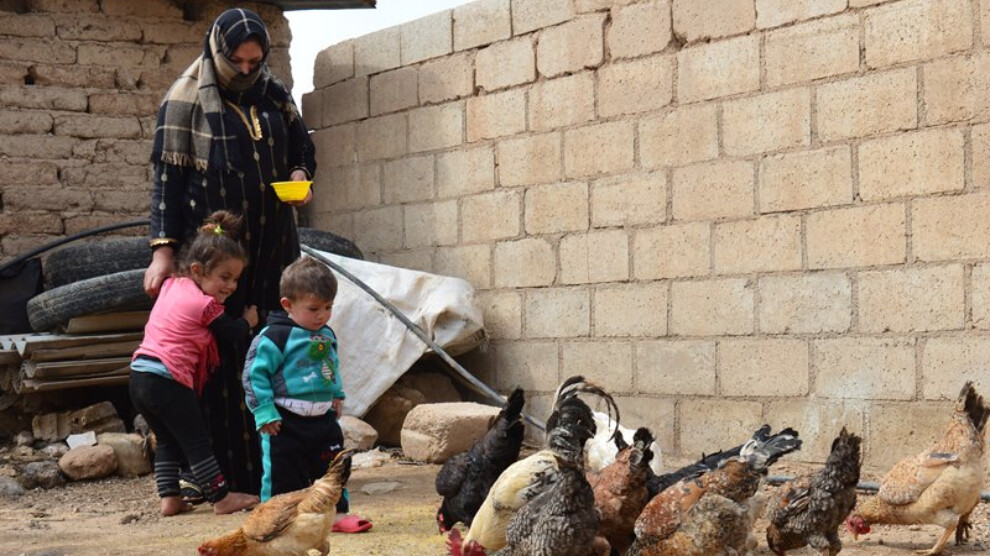 Women, particularly women living in rural areas, have to be creative in order to survive. The more people protect their society economically, the more they can be creative and produce. The Economy Committee of Kongra Star has developed a Poultry Farming Project for Arab women living in the Um-El Rabih village of Amuda town, NE Syria. Eight Arab women are involved in the project and they have about 80 chickens; each woman raises 10 chickens. The aim of this project is to support women financially so that women can stand on their own feet and maintain their lives. We spoke to the women involved in the project.

“Our aim is to support women”

Şehnaz İbrahim, a board member of the Amuda Economy Committee, gave us information about the project. “Developing a poultry farming project in villages was one of our 2022 plans, and we put this project into practice. Since there are more opportunities in villages for chickens, we have started our project in the villages. We have carried out this project, especially in the villages where Arab women live in to support them so that they can stand on their own feet. Supporting women economically is one of our main goals. Women’s participation in production and the labor force is important for us. We want women to stand on their own feet without being dependent on anyone. Some women still suffer because of financial hardships. For this reason, we keep developing projects for women,” she told us.

“Women have had their economic freedom

Speaking about the details of the project, Şehnaz İbrahim said, “Our project consists of two parts. Every four women raise 40 chickens, so a total of eight women raise 80 chickens. We bought chickens for the women and provided food for chickens so that the women could feed chickens. Women participated in the project with great enthusiasm. The women will work on the project for a year. After a year, the women will give us the chickens back but they will keep chicks and eggs. In this way, the women can make money and have economic freedom. I call on all women to be members of the cooperatives and strengthen their economy.”

Women victims of war benefit from the project

Cenin Al-Eli, a member of the women’s cooperative in the town, shared her thoughts about the project with us. Stating that women living in the village need such projects, she said, “Most of the women living in the village are women forcibly displaced from the occupied city of Serêkaniye. I and three women from my family have been involved in the project and we are raising our chickens together. Before we didn’t have a job and our financial condition was very bad. The project of Kongra Star supports us to stand on our own feet. Now, we raise chickens and earn a living by selling eggs.”

Pointing out that the project has recently been put into practice, Cenin Al-Eli said, “The project started several months ago. Women need more projects. We can manage our own economy and don’t need anyone else and this is important for us.”