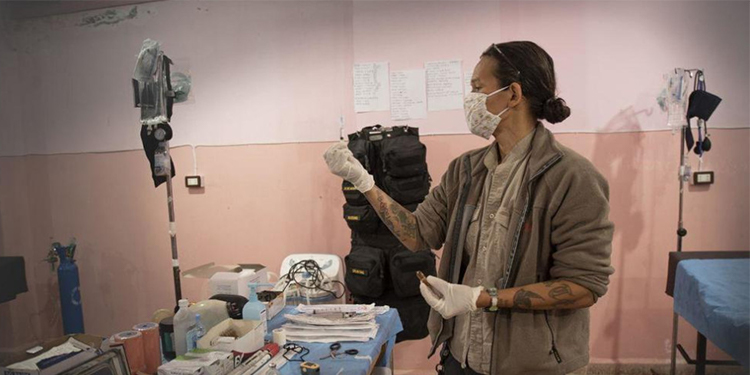 Since the early years of the revolution, many internationalists and comrades from the region have given enormous efforts to improve this situation. For this reason, Lêgerîn Magazine talked with Xweza about the importance of medical work in the revolution.

We are now entering the 10th year of this revolution. This is a big achievement that we might have never thought could be possible to achieve. Since the early days we have faced ISIS, along with many other jihadist forces, and have pushed them to their defeat. After ISIS we now face their main supporter, the Turkish state. Even with its technological and military superiority, we have resisted in an enormous way, creating a barricade to the imperialist and neo-Ottoman aspirations of Erdogan. Nevertheless we can not fall to the mistake of believing that this revolution  could have been victorious without sacrifice. When we now think about the history of resistance of the people of North and East Syria, we must immediately think about the blood spilled by so many comrades. But we must also remember the lives of so many comrades that could have been saved if medical knowledge and a better health situation could have been established at the time.

The understanding of health goes hand in hand with society and the processes it has lived through. Here you can see everywhere how nature has been destroyed by war, how the culture and identity of the people has been under attack for a very long time. Here you can see the effects of a special warfare which targets the ideas, strength and livelihood of the people everyday. In this context the health of society has been affected greatly, including in the way of organising itself. There is a fierce ongoing war at all levels. The core of the revolution is to recover society’s health. For this, practice and ideology must go hand in hand. Since the start of the revolution, there have been huge efforts to regain our health; inside the healthcare structures there is a lot of work put into changing the mentality of the people to see that health is also about prevention. When you live in a war zone it is very difficult to think about the future, and this is a great challenge in the approach to health.

There are a lot of health problems derived by the living conditions, the quality of the water, food, diseases and stress. There are also people becoming injured due to the living/working conditions and, of course, due to the attacks during military offensives. So it is really about changing lifestyle and empowering people to regain an understanding of health. There is a huge need of spreading the knowledge and practice within the population
so the people don’t rely so much on the expertise of doctors, which are usually male and often have studied
abroad. This year the first doctors from the health academy of Rojava will finish their degree. During the last years the newly trained nurses also started working. The health academy also gives ideological education to follow
the ethics of revolutionary practice. During the war of Serekaniye, many of the doctors fled. There needs to be a strong commitment to work in a place like Rojava. It needs a revolutionary approach.

In terms of natural health, there are also ongoing works by the woman’s movement to recover ancient practices and collect the knowledge women had in the past. In many villages, older women still carry out these practices and act as midwives. But it is also something which has been eclipsed by modern medicine. Women from Rojava have written books and carry out workshops to recover this knowledge. There is also a women’s health project in the woman’s village JINWAR which gives educations on natural health and also acts as a clinic for women, as well as a research centre. This project, called Sifa Jin, is in its early stages and is facing difficulties such as finding local women doctors and health professionals. Due to the exclusion of women from school and education before the revolution, this is a big challenge. But works are ongoing!

In terms of military first aid, knowledge is not widespread. A lot of friends fell martyr due to lack of knowledge
on treating survivable injuries. Now, there are educations on first aid for the military forces but there is still a need to spread knowledge on self-treatment and acquiring medical materials. The use of tourniquets, for example, was usually unknown to the military forces. A lot of friends died on the way to the hospital because of blood loss, something which could have been avoided by the use of tourniquets.

The women’s movement is central in this revolution. So how is the approach of the medical works to the question of gender?

Women face big challenges when it comes to health. Access to education is a huge topic, there needs to be more women involved in the health works in order to promote change. There are also efforts in the direction of giving women access to school education and to further studies. This also involves dealing with patriarchal and religious family values which keep women at home and promote marriage at a very young age. At the same time women need to strengthen themselves and struggle to change their own mentality. Here the role of jineolojî, the women’s science, is very important in helping to create a strong and revolutionary identity of women. Children already learn about jineolojî at school and there is a university degree in jineolojî which includes the subject of natural health studies. The women’s movement is also centred on a holistic approach and the connection to nature. Many older women have knowledge of medicinal plants and natural remedies for many daily diseases. The challenge now is to spread this knowledge and collect it to be implemented and recognised inside the health system.

There is also a strong shame of the human body due to patriarchal norms and morality; therefore sometimes it
is hard to find female gynaecologists. Women defend their right to their own reproductive health but it is still in the hands of male doctors. There are still midwives in some villages, but generally women go to the hospital;
here male doctors always recommend them to give birth by caesarean, which is quite expensive. Women are also under pressure from their husbands to carry out such operations for sexual reasons. They have many children, sometimes as many as 15, starting from a very young age. For this reason it also becomes an issue of women’s freedom and demography, control over their own sexuality and the organisation of life. But this is also changing with the new generations and impressive aspects of the society and the revolution itself.

When a comrade or civilian is injured, the problem doesn’t stop as soon the friend leaves the hospital. There are mental and continuous problems that come after these injuries and traumatic experiences can occur. It’s truly a big topic to address considering the environment and situation of the region, but how it has been addressed?

People are rarely alone, but of course there is a lot of trauma resulting from the war. Many people who lived through the war have developed post-traumatic stress disorder (PTSD) which many times manifests itself in the form of seizures. I have seen a lot of young women affected by this. When seizures occur in a female comrade, other young women gather around and massage the limbs, which become stiff, and protect her head until the crisis has passed. Collective life helps but there is also the need of more support. There are also “houses of the wounded,” where wounded friends live together communally and carry out different activities inside the revolution, and later on take part in different works. There are many injured friends who stay active and are widely respected and loved. It is about giving meaning to life, but the physiological aspects are very difficult to manage. There is some professional help provided but it is a field which is difficult to address. How we can deal with mental health using a revolutionary perspective is one of our big challenges and it is a long-term ongoing work.

We can definitely understand the importance of the medical works in the revolution; it’s a huge topic that certainly needs more attention and discussion. So in terms of military health, what has been the approach and/or the developments on this field? How is this received?

Military health is a very broad topic. Right now there are rehabilitation centres with physiotherapy and hospitals in all major cities which can provide good care. In the last years there have been huge renovation plans, new surgery rooms, machines brought in for different tests and new infrastructures. In the long term, the houses for the wounded provide a lot of support, but of course there are a lot of injured people in Rojava and there is still a lot that needs to be done.

Front line first aid is also very challenging. People went to the front lines willing to give their lives and followed this idea of fate. But slowly, through education, the idea is to change mentalities and give value to being able to provide help on front line positions; also to show that everybody can learn and provide help for themselves. Many friends refused to be rescued so that others wouldn’t risk their lives in doing so. There was the idea that nothing could be done, but now this is changing. When the armed forces learn about what they can do and, more importantly, what they could have done, there is a change inside of them.

Our comrades learn very quickly; many show a huge potential to carry on further studies and to teach themselves. This is the main idea: that they can teach each other and see how this knowledge can give them a stronger influence and a stronger role in the revolution. It’s an added skill that in the following attacks will make a huge difference, also in terms of affecting the psychology of the enemy. In war every wound is treated- even ISIS fighters are treated by our comrades. It is an ethical decision made inside a brutal war, which serves as an example for all of humanity. If every soldier is able to treat his/herself and the first aid projects can develop with strength, it will make this struggle stronger. It raises morale to take care to this level. It is with this change that developments can happen, with the people themselves putting it into practice and seeing themselves in this role; for this, all structures and fields of life have to move forward at the same time.

Without the woman’s revolution, there would be no women first responders on the front line and approaches
could not change; without work in ecology, there would be no value to nature and meaning to ones own life; without organisation, one could not build up the teams; without diplomacy work, one could not get access to medical material which comes from abroad; without military structures, the land would not be in our hands…and so on. Every work is part of all the works.