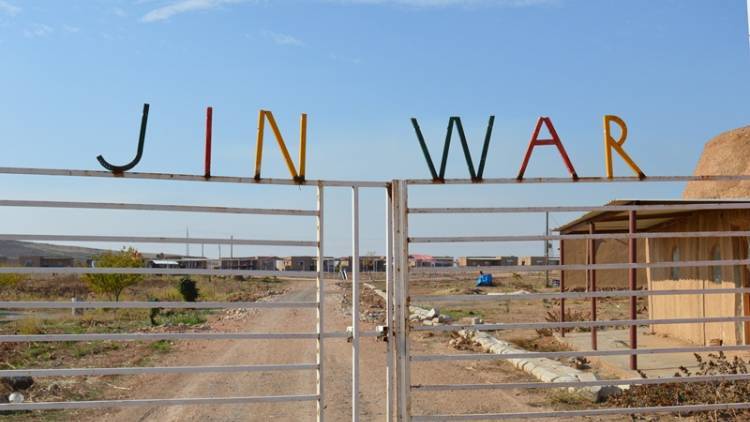 One of the achievements of the Revolution in Rojava, also known as the women’s revolution is Jinwar village, which opened on November 25, 2018. Jinwar, which was built to create a free life governed by women, an ecological economy, a healthy society with women’s companionship and love, is located in the west of Dirbesiyê district of Hesekê city, Northern and Eastern Syria. The project of Jinwar was started in the winter of 2016-2017 after long-term discussion with relevant organizations in Northern Syria. The foundation of the village was laid by women on March 10, 2017. The door of the village was opened on November 25, 2018. The village is specific because it is an all-women village, only women can stay there. The village is surrounded by the historical Gebz Hill and the villages of Kerkend, Herba, Etîşan, and Qeyrawan. The village has Arable lands for agriculture and this is one of the reasons why this region was chosen for building the village.

Women have a communal life in the village

When you enter the village, the life built by women fascinates you. You see mud-brick houses and feel communal life in the village. We can say that this village is the women’s paradise on earth. Women work and make decisions in solidarity. If you [want to] see labor, communal life, power, and the existence of women and nature, you should definitely visit Jinwar village.

Harmel is the symbol of the village

While everything in the village is inspired by history, the symbol of the village, Harmel, is the symbol of fertility. Harmel, commonly called wild rue, Syrian rue, is an herb used in the treatment of many diseases, also believed that it removes the negative energy. Kurdish people hang harmel herbs on the walls of their houses to protect them from evil. In this village, women with different ethnic identities have built a common life together. Women from Dirbesiyê, Kobanî, Deir ez-Zur, Shedadê, Shengal, Shehba, Sulaymaniyah and Maxmur live in the village.

All children in the village are raised by all women

Men cannot live in the village

“A small model of the Democratic Nation”

Opening the village on November 25 is meaningful for us, Ruken Rojda said, “We live in the 21st century, as leader Apo (Abullah Öcalan) said, this century is a century of women’s revolution and will. The building of Jinwar has attacked the attention of many women and empowered them. Women couldn’t express their thoughts freely. In the beginning, the project of Jinwar had many challenges. The village is a response to all challenges. Women, who cannot express their thoughts, can come to this village. Jinwar is the village of will and education. The village is also a small model of the Democratic Nation. The communal system in the village shows this.”

Reporting that there are councils such as Women’s Council, Children’s Council, and Mothers’ Solidarity Council in Jinwar village, Ruken Rojda told us that they try to find solutions to the problems faced by women together.

“We should keep struggling with science”

Pointing out that women should know their own history, Ruken Rojda said, “When women are aware of their existence, they can fail the policies trying to annihilate them. We should love our femininity in order to remove the ruins of the patriarchal mentality. We should keep struggling with science in order to build a free, equal, and democratic life.  After all, life exists with the existence of two sexes. Both genders complement each other. We need to continue our struggle with conscious women.”

“Women’s love of life is amazing”

Emphasizing that Arab and Kurdish women live together in the village, Ruken Rojda said, “The door of the village is open to all women. We have a section reserved for women coming abroad to visit the village and do research. These women want to learn the system in the village to practice it in their own countries. Women living in the village decided to live in the village. When we ask them the reason for coming to the village, we see what kind of cruelty they faced. Women’s love of life is amazing.”

“Women don’t have to accept slavery”

“We should create free personalities”

Calling on women to not accept slavery and to protect their rights, Ruken Rojda said, “We should keep struggling for a free, democratic, and equal life wherever we are. With their solidarity and unity, women can create free, democratic personalities and be pioneers in society.”

[Unfortunately the videos below do not have English subtitles yet]