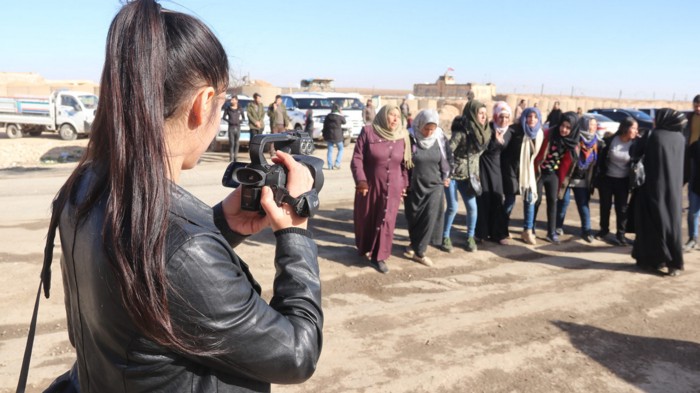 In the first article in this series, I looked at some of the challenges facing the Rojava Information Center in reaching the outside world — and how we tried to overcome both Western indifference and orientalism on the one hand; and Turkish state propaganda and institutional legitimacy on the other.

The Kurdish-led autonomous regions in North and East Syria (NES), better known as Rojava, have won plaudits for their promotion of democracy and women’s rights — but struggle to overcome Western indifference and orientalism on the one hand, and the vast PR and media machine operated by the Erdoğan regime in Turkey on the other. The local press in North and East Syria is not only stymied by Western attitudes, however. There are many active and effective local journalists on the ground, who have a deep and long-term relationship with their communities. Moreover, NES is the only region of Syria where foreign journalists can operate freely, and a fair number of international correspondents are fond of the Kurdish cause in particular — both by comparison with the Assad regime or Turkey (one of the world’s top jailers of journalists), but also in its own right as a struggle against jihadist violence for women’s autonomy, self-determination, and democracy.

Nonetheless, official and semi-official news organs aligned with the governing Autonomous Administration of North and East Syria (AANES) have often failed to capitalize on relative Western goodwill toward their cause. Just like its military and political organs, the region’s press agencies and public relations centers grew out of an underground activist movement.

AANES-affiliated news outlets such as Hawar News and ANF are able to foster continued support for NES among the Kurdish diaspora and Western leftists, but their sometimes unprofessional, Google-translated, activist-media style means they are seldom cited in the Western press. The reporting style runs the gamut from a fairly reputable news wire to sensationalized claims based on questionable sources and uses clearly partisan language to describe the conflict. This contributes to the way in which Kurdish and pro-AANES media remains largely ghettoized. (Turkish state media is scarcely more professional, and considerably less accurate — but they can afford glossy production values and Western journalists.)

This was another challenge the RIC, with our mixed team of international volunteers and local employees, sought to overcome.

With our shoestring budget and staff of no more than ten, RIC itself could never have established a news wire capable of covering the whole of NES: but circulating contacts, footage and interviews meant we have been able to facilitate several thousand reports across the global press. (In turn, this has granted us a platform to extend our focus, releasing in-depth reports on issues we saw consistently overlooked in Western coverage, like the new political system being developed in NES.)

Fortunately, however, there are local press journalists in almost every village across the region. ANF or Hawar do clearly operate as pro-AANES media. In response to Turkish media hegemony, they editorialize and give a platform to AANES politicians marginalized elsewhere. Some claims — such as those about the extent of Turkish direct support for ISIS — are clearly wide of the mark. But they can be trusted on practical reports covering, say, where air-strikes or shells are landing, new AANES agricultural or cooperative initiatives, or the nitty-gritty of the partial economic embargo imposed on the region.

Very often, then, RIC’s role is simply to confirm news first reported by a local journalist by calling them or another source, as appropriate. This might mean fact-checking a single news report. More broadly, it might mean cross-referencing local news coverage, interviews with media activists, OSINT research and claims by the AANES’ security institutions to produce a comprehensive dossier detailing scores of former ISIS members now on the Turkish payroll. In this way, local press reports were checked, verified, and circulated to top US and global officials — and when the US Government did decide to sanction one Turkish-controlled militia for recruiting ISIS members, alongside other atrocities, it confirmed the local reports checked and broadcast to the outside world by RIC.

The RIC can provide professionalism and links to the global press: local journalists can provide a depth of knowledge and contacts that exceeds ours. To take one key example, Turkish-occupied regions of NES are “closed to the media except for those licensed by Turkey, and closed to local and international human rights organizations… Journalists and activists in these areas are also subjected to restrictions and abuses that amount to killing, kidnapping and torture,” per the Index On Censorship. The only exceptions are occasional press junkets with Turkish handlers, resulting in stenography like the NYT’s whitewashing of gross human rights abuses in Afrin, or Sky News’ rehabilitation of a former ISIS gunrunner.

As such, it is very hard for RIC or foreign reporters to access sources on the ground in these regions. But local activist groups like the Afrin Human Rights Organisation or Sere Kaniye’s ‘Hevdesti’ are made up of displaced locals with deep connections to the occupied regions. We work in partnership with these advocacy groups to connect people who have been imprisoned and tortured by Turkey and its proxies to the UN and other international rights monitors.

This is an ethical, as well as just a tactical, imperative. To counteract the silencing of local voices in a discourse dominated by Turkish government mouthpieces and Western think tanks, the RIC seeks to connect international journalists with primary sources on the ground — officials, activists, ordinary civilians, opposition politicians. Our aim is to increase not only the parity of coverage (i.e.. hearing from NES’ military and political leaders in counterpoint to Turkey’s), but also its depth, quality, and integrity.

Our media model seeks to deepen orientalising media accounts which reduce NES to a war-torn desert, voiceless, understandable only through casualty figures and refugee movement statistics. If a journalist wants to cover foreign ISIS-linked women, we suggest they speak to Yezidi victims too: if they want to cover the female fighters of YPJ, we suggest a supplementary interview with women at the center of NES’ political system.

During spells of lower interest, activists can work on building up their networks alongside more in-depth reports appealing to specialist audiences, researchers, policymakers and human rights organizations. For example, our ground teams travel to regions which are the focus of Turkish threats to build contact not only with local officials and journalists, but also with ordinary civilian families. A long-term focus on connecting foreign press with local civilians and accessing mainstream media networks, even at the cost of editorial control, pays dividends when the world’s attention does happen to reach the next Tahrir Square, Euromaidan or Rojava.

It can be hard for people in NES to understand why, despite apparent public support in the West for their admittedly heroic struggle against ISIS, they are still abandoned below Turkish warplanes. The same is true of the local press. In his study of Orientalism, Edward Said describes the way in which Arabs came to “see themselves as the Arabs of Hollywood.” Much the same could be said of the Kurds, finally enjoying a modicum of popular support in the West. Insofar as RIC has a political aim, it is to help our colleagues and neighbors, Kurds, Arabs, Christians, Yezidis, to get beyond a Hollywoodized valorization of their sacrifices on the battlefield to a serious, equitable standing in the Western press.

Thus, while our local colleagues provide knowledge on the ground, we in our turn provide not only contacts, but also training and other forms of support — for example, working with local think-tank to help them have their conference on the ISIS threat covered by AFP, Al Jazeera and others. We provided training on how to write press releases, catch the attention of the Western press, and deal with journalists’ inquiries in a rapid and professional manner.

Sometimes, it must be admitted, this seems an impossible task. It is hard enough even to persuade journalists to refer to North and East Syria by its official title rather than the lazy, orientalizing shorthand of ‘the Kurds’ — let alone give a fair hearing to NES’ claim to present a model of direct democracy that can constitute a genuine alternative to totalitarian regime hegemony or the brutality and chaos of Turkish occupation. The West’s interest in NES remains largely limited to death and destruction, figured either as sob stories about ISIS children and raped women, or as a simple cold tally which gives no reckoning of the human loss and grief underlying the conflict.

As another line in the Brecht poem, I mentioned last week runs: “if you’d have read the newspapers as attentively as I have/you’d have buried your hopes.” Sometimes we can do little more than get an accurate death toll into the papers — or at least an alternative figure to countermand Turkey’s claims. This might not seem like much. But it is, we believe, important. In the midst of the propaganda war over Syria, a little objectivity goes a long way.

Matt Broomfield is one of the co-founders of the Rojava Information Center, the top independent news resource on the ground in North and East Syria. You can follow RIC on Twitter @RojavaIC and follow Matt on @MattBroomfield1.