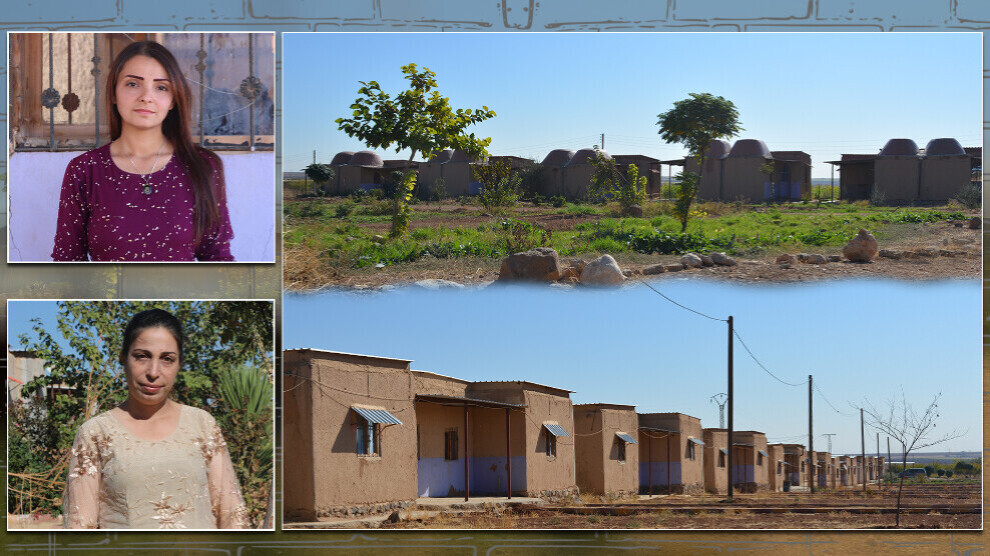 Women are subjected to all forms of violence all around the world. And women struggle against gender-based violence in all spheres of life. As violence against women increases, the resistance and uprising of women against it get stronger. NuJINHA spoke to two women living in the village of Jinwar, an all-women village in northeast Syria and a women’s achievement of the Revolution in Rojava.

“Life is different in Jinwar”

Delal Hacî, a woman from North and East Syria’s Hasakah city, has lived in Jinwar for about a year. Underlining that Jinwar is a place far away from violence and social pressure, Delal Hacî said, “There was no one to take care of my children. For this reason, I decided to come to the village of Jinwar. Women face pressure and oppression. Reactionary society wants to weaken and disempower women. Life is different in Jinwar. I have been living in the village for about a year and many things have changed in my life. Now, I feel that women are strong; they can stand on their own feet and look after their children alone. I also changed; I am not like before. Society cannot suppress me any more.”

“It is one of the achievements of the revolution”

Underling that the village of Jinwar is one of the achievements of the Revolution in Rojava, Delal Hacî said, “Jinwar opens its door to all women victims of violence. The village is one of the achievements of the Women’s Revolution in Rojava. Jinwar is not only a space to sleep for us but also a world for us. In this world, women live together and help each other. We produce whatever we need in the village. We bake bread, plant vegetables; make yogurt and cheese in the village. We also protect ourselves.”

Struggle against all forms of violence

Emphasizing that women are strong enough to struggle against gender-based violence, Delal Hacî added, “Women have a great power. If they use their power to get back their rights, they will get good results. Women can live and earn a living without men. But men cannot live without women because women are builders of life. The stories and problems of women may differ from each other but they have only a way to overcome problems; the way is unity. Women can end violence if they unite.”

Yasmîn Ehmed, a woman from Afrin, has lived in the village with her daughter for about a year. “Jinwar gives me the opportunity to improve myself. I have learned many things until now. Women must be educated and know everything about the world. For this reason, the Jinwar Academy was founded. The academy plays an important role for our education and our children’s education. Women have risen up against the state violence in Rojhilat and Iran. Jina Mahsa Amini was killed in Iran to scare women. Women are stronger than the patriarchal mentality and the Iranian regime. Women should chant the slogan ‘Jin, jiyan, azadî’ to have an equal and free life.”