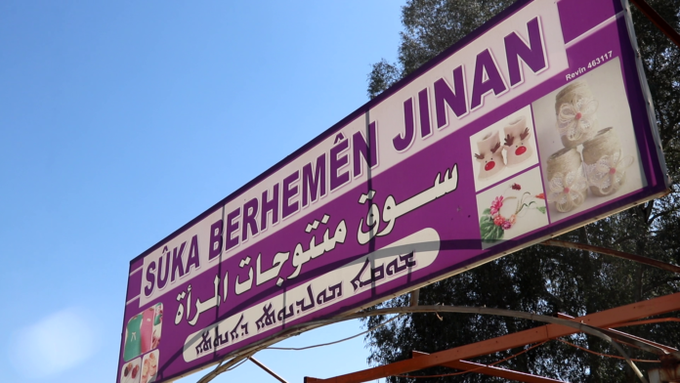 The women’s market in Rojava aims to develop women’s economic autonomy, enabling them to forge social ties and giving them confidence.

This souk project is being set up by women in the heart of a region, Syrian Kurdistan in northeastern Syria, where unprecedented political experimentation has been taking place for ten years. Municipalism, or democratic confederalism, is the political system of this autonomous territory, where three to four million people live.

Chloé Troadec is a French volunteer from the Rojava Information Center. Based in Qamishlo, she closely follows civil society, which lives according to the rhythm of this democratic confederalism, an experience which is based on an idea …

This system took shape in 2011, with the People’s Spring, which began in Tunisia, and spread to the Middle East.

“There was also an uprising among the Syrian people as a whole. The Kurds in northern Syria seized the opportunity to try to obtain the political, social and cultural rights that could never be obtained in the days of the Baath regime, which was quite leaning towards Arab nationalism. There was a window of opportunity open at that point. The Kurds organized themselves into a self-defense unit, the YPJ / YPG, which became known after the Battle of Kobane, and reflected on the system to be put in place. This proposal for democratic confederalism also comes from the Kurdish liberation movement in general and Abdullah Öcalan in particular. It was something known and defended among the Kurds in Rojava. The influence of this ideology of the Kurdistan liberation movement in Rojava was already very strong before 2011. And in 2011, it was the people who defended this political project who were the most active and who put it in place. At that time it was a bit of chaos in political and military terms. There were no elections. It was the people themselves who started to realize this, to create these communes and gradually to create their system.”

This democratic confederalism concerns the seven regions of northern and eastern Syria. At all levels of governance, committees are set up, education, reconciliation, self-defense and training committees. These institutions are co-chaired in mixing with quotas of parity, gender and nationalities. Women take all their places there, at all levels of operation.

“At all levels of governance there is, in parallel with mixed assemblies, an autonomous assembly of women. And there are generally a lot of autonomous women’s organizations. One of the most effective are the women’s houses, the Mala Jin. Women can go there to expose their problems, to look for solutions, to find a job. They are there to meet the needs of women in society. And there are women’s assemblies which decide in the same way as for the communes, which organize themselves in terms of self-defense, reconciliation, education, economy at the level of their commune. There is also a branch of the women’s economy. They are in charge of carrying out economic development projects to open up professional opportunities and to give women economic autonomy. They have created lots of women’s cooperatives.”

Towards economic autonomy for women

And in Qamishlo, it is from this Autonomous Assembly of Women that a souk project emerged, a market held by women. A project launched by the municipality of Qamishlo, with an important social and economic vocation.

“The idea of ​​this project is to allow women to achieve a form of economic autonomy. It is 14 women together who will each have their own stall in the market. Some are going to sell things they bought from the wholesaler and then go on to retail. But others, who go to make pastry or crafts, will produce at home the products that they will sell in the market. The idea is to allow these women to exercise a professional activity, to leave the house to meet other women. It is a very important social and political aspect. And at the economic level it develops a commercial activity that will provide them with an income. And this income gives them financial autonomy so that they are not dependent on their husbands if they are married, or on their father or brother if they are still single and still live with their parents. The goal is not only to make a market for women, it also gives them economic autonomy. The idea is not to immediately impose a mode of operation, but to let these women start their activity and subsequently develop their proposals themselves and put in place what they want.”

And for many, having an economic activity gives them a place in society and encourages them to take more responsibilities within the municipality.

“There are a lot of women who, when they have started an economic activity, or have started to work in a cooperative, or the autonomous administration, tell us that this opens up a whole range of possibilities. It is not only this activity, but also the self-confidence that they will gain. Afterwards, they will participate in the democratic process within their municipality. After a few years, they will want to work with the women’s office of Qamishlo municipality to develop other projects for other women. It is a first step for many of them who were at home, which will lead them to do a lot of things.”

Towards a model of living together

Ten years after its emergence, this democratic confederalism could, according to Cholé Troadec, serve as a model for Syria, and even beyond, a way of tracing a path for living together.

“The goal is to say that it is a solution first of all for the Middle East. We see that there are Kurds, Arabs, Assyrians, Syriacs, Armenians, Chechens, Turkmens who live together and who put this system into practice together. The idea is to say that this system should be transposed to the level of Syria and is a solution for the current crisis in Syria, which is still not resolved after nearly ten years of civil war, of attempted revolution at the global level of Syria. We are returning to the dead end where it is still Bashar al Assad who is in power in Damascus. First, it must be a solution for all of Syria. There is the Syrian Democratic Council, which is an institution that comes from northeastern Syria, which works to bring together parties, organizations and political figures around a democratic and federal project for Syria. The exact modalities of how it should be implemented remains to be defined with the Syrians in the regions where they live.”

But in the meantime, this democratic model of northeastern Syria remains threatened, caught between the interests of its various neighbors. And that does not reassure Chloé Troadec.

” The existence of this model right now in northeastern Syria is very clearly threatened, both by the permanent threats of the Turkish state, which has already invaded the regions of Afrin, Girê Spi and Serê Kaniyê. Every day there are bombardments on the front occupied by the Turkish state. And the Turkish state recently threatened to attack the city of Derik, which is a city in the east of Rojava, a city with a lot of Christians. In fact, northeastern Syria is still caught between Turkey on one side and the Syrian regime on the other, which does not want to see this model implemented in Syria. It would mean the end of the Baath regime, the end of Bashar al-Assad and it would mean a democratic system for the Syrian people. And also on the east side with Iraq and the Iraqi Kurdistan region, which is not favorable to a democratic system. The system which is in place in Iraqi Kurdistan is rather a system of parliamentary democracy, but which is plagued by corruption and by the stranglehold put by the Barzani clan on the region.”

And despite this uncertain context, democratic confederalism in Rojava continues to develop, in particular with this project for a women’s souk in Qamishlo. This project benefits from the support of the Danielle Mitterrand Foundation.