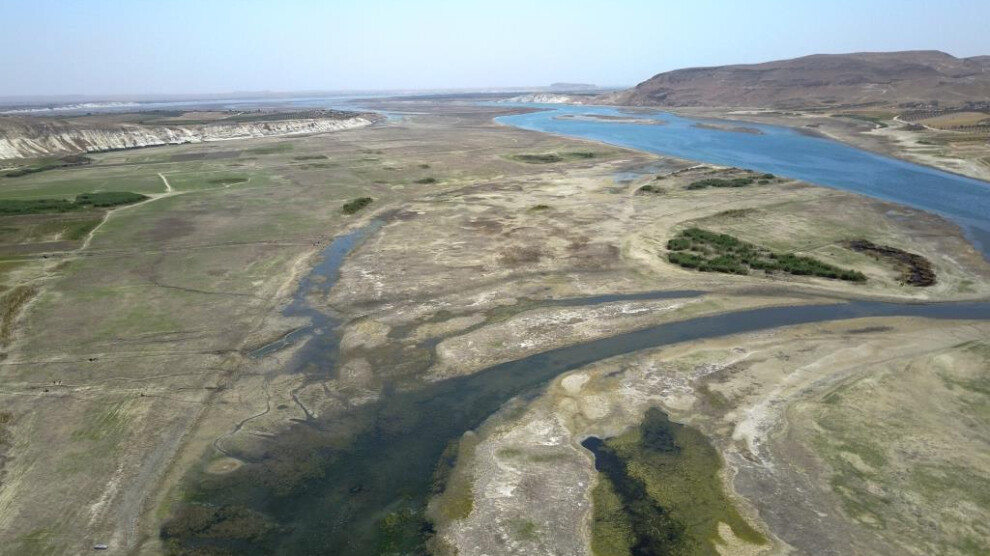 In the bible it is called the great river. The Euphrates fed the cradle of civilisation in ancient Mesopotamia. But, for Turkey, it is another weapon of war.

Turkey’s system of huge dams is not just about irrigation and generating hydro-electric power. It is a source of political power over the whole region.

Geography has allowed Turkey control more than 90% of the water that flows down the Euphrates and 44% of water in the Tigris. The 22 dams of the South Eastern Anatolia Project give the Turkish government a stranglehold over Syria and Iraq, and they have no qualms over using it.

Already by 2019, Turkey had cut the water flowing into Iraq by an estimated 80% of its 1975 rate, leading to desertification and mass displacements of population, and had reduced the already scarce supply to Syria by 40%.

An 1987 agreement is supposed to guarantee a minimum amount of water to both countries, but, since long before Recep Tayyip Erdoğan came to power, Turkey has displayed its contempt for such restrictions. At the inauguration of the Ataturk Dam in 1992, then president Suleyman Demirel announced: “We have the right to do what we like.”

What we are seeing now, though, is something different. Turkey has moved beyond the greedy monopolisation of resources and callous disregard for the needs of their neighbours. Their restrictions on the flow of water into the Euphrates are a deliberate assault on the people of North and East Syria (Rojava); an attempt to undermine the Autonomous Authority established by the Kurds and their allies by depriving its people of life’s most fundamental need.

They may not officially be at war, but this is effectively a siege, as well as a crime against humanity. For some time, Turkey has been deliberately increasing pressure on the region’s water supply — in 2019, the water level in Syria’s largest lake fell by around a metre — but, on January 27, Turkey’s water war entered a new level of violence. Since that date, instead of the 500 cubic metres per second stipulated in the 1987 agreement, Turkey is releasing just 200.

Either directly, or through wells that are dependent on the water level, the Euphrates provides water for a population similar in size to Scotland’s. It provides the water they need to drink, the water that irrigates their agriculture, and the water that generates most of their electric power.

By May 8, Harwar News Agency was reporting that 30 water pumping stations were out of service, and others were operating at half capacity. Hundreds of thousands of people had to rely on water delivered in tanks. As the flowing river has been reduced to stagnant pools, communities that depend on untreated river water are being exposed to bacterial contamination, and the Euphrates has become a breeding ground for mosquitoes and disease-carrying sand flies. All this is happening during a global pandemic and in an area where summer temperatures are commonly in the high 30s.

Under the Bashar al-Assad regime, this region was used as Syria’s breadbasket. The Autonomous Administration has encouraged the planting of vegetables and orchards in place of some of the more water-hungry crops, such as wheat and cotton, but these crops still need water.

The situation has been compounded by this year’s exceptionally poor rainfall. Thousands of hectares of wheat are threatened, and fields of failed crops are being given over to grazing. The destroyed harvest is also leading to fears of a shortage of seed for next year.

The price of animal feed has gone up, and with growing numbers trying to sell some of their animals in order to survive, prices for livestock have fallen. A large proportion of the population works on the land and relies on the harvest or on livestock for a living.

A surprisingly large number of people also worked, until recently, as fishers. Fishing supported 300 families in Raqqa alone, but now there is little to catch, and nowhere for the fish to breed and ensure their future survival.

By the end of April, six out of the eight turbines at the Tabqa dam had to be shut down and only one turbine was operating at the Tishneen dam. Severe electricity rationing is hitting all forms of industry, including the manufacture of essential machinery. If industries can’t function, this also affects jobs and livelihoods, with further knock-on effects across the economy.

Hospitals, bakeries and mills are all operating on generators. Prices are soaring for solar panels and for black-market diesel for generators. Gas for cooking is in short supply and people are relying on dangerous kerosene stoves.

Iraq, downstream, from Syria, has reported that the water they are receiving has halved, but the impact there is not yet so dramatic.

The Damascus government has often proved itself content to watch the people of the Autonomous Region being put under pressure, in the hope that they will eventually be forced back under the regime’s control. It wasn’t until May 6 — more than three months after Turkey turned down the taps — that they protested the breaking of the 1987 water agreement, and the Syrian Minister for Water Resources demanded that Turkey release Syria’s share and called on international organisations to intervene.

Warnings from within the region of an impending humanitarian catastrophe, and repeated calls for international intervention, have fallen on deaf ears. Although access to adequate water is recognised as a human right, and although water shortage and water conflict are recognised as big and growing problems, international organisations are perhaps even less equipped to address water issues than they are other disasters.

For the people of Hasakah and its surrounding towns and villages, the aggressive water crisis has gone on for much longer. Since the Alouk water pumping station was captured by Turkey in their October 2019 invasion, the water supply has been repeatedly cut off for weeks at a time.

The station provides water for around 460,000 people. Attempts to construct an alternative supply route appear not to have reached fruition, and people are left relying on tankers and poor-quality well-water. Turkey’s mercenary militias use these closures to force the Autonomous Authority to supply greater amounts of electricity to the areas they have occupied. In the case of Hasakah, both Russia and the United States have intervened to facilitate negotiations, but this hardly solves the underlying problems.

In Turkey’s war against the Kurds, the environment has been a major casualty in other ways. This is more than collateral damage. It is part of a deliberate destruction of everything Kurdish. The scale of destruction — environmental, cultural and social — resulting from the recently completed Ilisu Dam, was so widely condemned that this even made international businesses withdraw investment. Fears included downstream impacts on the Iraq marshes, but the most immediate destruction was in the Kurdish region within Turkey’s borders. (It is a bitter irony that the source of the Euphrates is also within Kurdistan.)

In South East Turkey/North Kurdistan the Turkish army cuts down forests in their attempt to flush out Kurdish guerrillas. In occupied Afrîn, their proxy militias have ravaged the countryside. The militias have cut and burnt over a million olive and forest trees in blatant acts of destructive violence that seem to have no other purpose than as a symbol of brute power.

At harvest times, the farmers of North and East Syria have to keep a constant watch for arsonists from the militias who set fire to their crops: another illegal attack on the civilian population.

Turkey is targeting the food and water of all who live in the region. It is not yet a genocide, but, if it is allowed to continue, that is what it could become. Will we have to wait for the looming catastrophe to develop into actual famine before the world takes notice?