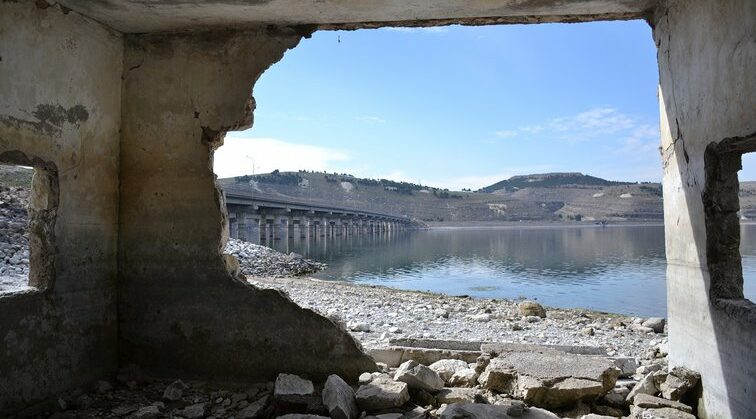 The nation has been accused of breaking its agreement to ensure a flow of 500 cubic metres per second of the Euphrates flows through to Syria.

The deliberate withholding of water from hundreds of thousands of people should be headline news. But not, it seems, if the people affected live in the unrecognised Autonomous Administration of North and East Syria, known to many as Rojava. And not if the nation holding back the water is a member of NATO.

Most people are unaware that, since the end of January, Turkey has reportedly broken its 1987 agreement with Syria and Iraq to ensure a minimum flow of 500 cubic metres per second of the Euphrates River to Syria, 60% of which goes on to Iraq. Instead, it is letting less than 200 cubic metres through to Syria, according to Kurdish authorities and NGOs, leading to a severe decline in the water levels and threatening a major humanitarian crisis.

While this has been largely ignored by the mainstream media, it has been well chronicled by local media outlets. Meanwhile, Turkey denied any wrongdoing and accused the Kurds of deliberately causing the shortage.

There are many international actors in the region and they cannot be unaware of what is happening. Their silence amounts to complicity.

Geography has given Turkey control of more than 90% of the water that flows into the Euphrates and 44% of that in the Tigris. For decades, Turkish water policy has been characterised by a disregard for the needs of those downstream in Syria and Iraq. But what is happening now is more than selfishness. Turkey may not currently be officially at war with North and East Syria – where Kurds and their allies have established an autonomous region – but in practice, Turkey’s war against the Kurds never stops. The nation is now weaponising the water of the Euphrates, knowing that withholding water is a war crime.

In a region where temperatures often exceed 35°C, and in the middle of a pandemic, water is in limited supply, is hard to access, and is increasingly polluted and infected.

Due to the diversion of water, 30 out of 200 pumping stations no longer work, and others are operating at half capacity, reports the Rojava Information Center, a local news agency. In many places, water is having to be brought by tankers. Half a million people have already been left without safe drinking water, and a further 5 million have been put at risk of losing access. Some who can afford it have paid for new deep wells, but these threaten to deplete groundwater reserves.

This region was once the breadbasket of Syria, but agriculture has been badly hit by a lack of water, and wheat may now have to be imported for both flour and seed. Unusually low rainfall has made the lack of irrigation even more devastating.

Turkey is weaponising the water of the Euphrates, knowing that withholding it is a war crime.

The consequences of the water shortage are already biting: yields are low, some crops are not harvestable and fit only for grazing, others were not even planted. Farmers are failing to pay their debts, and with fodder costs rising, shepherds have been forced to sell off their animals at low prices. Fishermen have nothing to catch, and there is nowhere that fish can breed to regenerate stocks.

The region relies on hydroelectricity for 80% of its power. In 2017, ISIS attempted to destroy the turbines, but the autonomous administration repaired the damage as best they could with the parts available to them. Now, though, there is only enough water for the great dams to run a single turbine at a time. Instead of 500 megawatts, output could be down to less than 100.

Severe power rationing impacts life at every level, from the home to the wider economy. Those who can, spend their money on generators and black-market oil, while others just have to wait. If power becomes too low to pump out the water and keep the machinery of the turbines dry, these could suffer long-term damage.

Recently, Turkey-backed militias have also been diverting water from the Khabur River, which runs through the east of Syria before joining the Euphrates just south of Deir ez-Zor. The Syrian city of Hasakah and its surroundings have had only intermittent water supplies ever since Turkey captured the Alouk pumping station in 2019.

The water siege isn’t the only way in which Turkey has used environmental degradation as a weapon of war against the Kurds. In fact, Turkey has also been accused of deliberately flooding Kurdish lands in Syria; and the dams themselves, which are in Northern Kurdistan (south-east Turkey), have served as a means for disrupting Kurdish settlement, culture and natural landscape – especially the recently completed Ilisu Dam, which drowned the 12,000-year-old town of Hasankeyf.

Trees are another target. In the 1990s, the Turkish government broke up the long-established patterns of rural life, destroying thousands of Kurdish villages and forcing hundreds of thousands of Kurds to leave their land and take refuge in the cities.

Now, Turkey is reportedly attempting to drive away those who remained, or have returned, by destroying the natural environment that the Kurds hold dear and that provides their livelihood. They have uprooted thousands of trees and burned acres of forest.

Environmental destruction is a tool of oppression and ethnic cleansing but also a source of short-term gain. Afrîn – the westernmost canton of the autonomous region of Syria, which Turkey occupied in 2018 – has lost half a million of its famous olive trees and also large areas of forest. The Turkish military, which is now invading the mountains of the Kurdistan Region of Iraq, is destroying orchards and vineyards and burning woodland, and has been photographed removing truckloads of felled trees.

Around harvest time, villagers of North and East Syria have to keep a constant vigil in their fields against arson by Turkey’s mercenaries.

This attack on basic services is intended to undermine the autonomous administration and sow unrest and division. Syrian President Bashar Assad and his Russian backers also welcome any potential weakening of support for the autonomous administration, and, even though the cuts will also affect government-controlled areas, there has only been a single protest reported from the Syrian government. The water shortage is also being felt further downstream in Iraq, where a weak government has little clout against its aggressive neighbour.

Last week, Mustafa Ito, co-chair of Kobani Region Council in North and East Syria, criticised “the international silence towards Turkey’s seizure of water from the region, because this is taking place in front of everyone’s eyes, such as Russia, the Global Coalition, the United Nations and other world powers.”

Turkey is in economic difficulties and is looking for international friends. If the US decided to apply pressure, it would be hard for Turkey to ignore. It seems that, yet again, the US has focused on winning a war, but given little thought to securing a subsequent peace. If Turkey is left to continue its effective siege of the region, the potential for greater instability and for the resurgence of ISIS or similar groups will increase, especially as these are actively encouraged by Turkey, which uses the jihadi gangs as mercenaries.

Last summer, the Solidarity Economy Association and a number of small independent NGOs in Europe raised money for vital water projects in North and East Syria. A representative of the Water for Rojava Europe Committee, explained that, “To confront the water cuts by Turkey and increasing droughts due to the climate crisis, technical responses are not sufficient. Political answers are needed.”

“The £110,000 [we] raised is a tiny sticking plaster on a gaping wound, now the situation is many times worse than a year ago, the water crisis is escalating, and we see no trace of this in mainstream media,” she added.

The ongoing water war is about more, even, than the destruction of people’s lives and the risks of a dangerous future. It is also an attack on the Kurdish autonomous political experiment taking place in North and East Syria, which has been a source of inspiration to so many, including in Turkey itself. A Turkish victory would crush that. Not the ideas, but the hope generated by a living example.