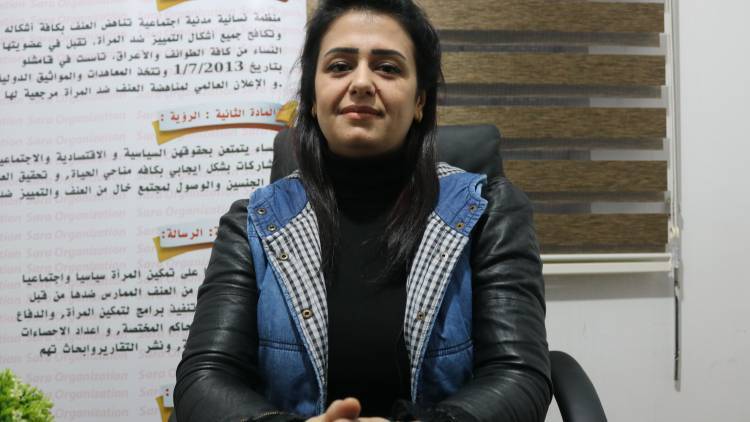 It has branches in many cities

Stating that the organization was founded to protect women from violence and women’s rights, Reca İsa says, “We have branches in Kobanî, Hesekê, Sirîn, and Qamishlo. Sara Organization was founded on the principle of solving women’s problems, ending violence against women, securing, supporting, and protecting their rights. We, as the organization, follow violence against women trials. As members, we are expected to constantly improve ourselves so that we can help women and solve their problems. We hold seminars in districts and towns for women to know more about their rights. We also work coordinately with other women’s organizations in Rojava Kurdistan.”

“You are Hope” campaign

Noting that Sara Organization launched a campaign called, “You are Hope” against suicide among women, Reca İsa says, “Recently, the rate of suicide committed by women have been increasing. For this reason, we launched a campaign called, “You are Hope”. We visited several schools and gave presents to students. We also monitored teachers’ relationships with young people and determined the needs of students. They are in a sensitive process; they are easily influenced by family, school, and society. That’s why we have a project to have a psychologist in every school. We will realize this project in the upcoming months. We are going through a war process. There are effects of war on society.  Because women are more concerned with their family income than men, they are most affected by economic or psychological problems.”

Sara Women’s Organizations launched a campaign with the motto. “Your voice is my voice, no to femicides” as part of the 16 Days of Activism campaign against gender-based violence. “We launched the campaign in Qamishlo, Kobanî, Hesekê, and Sirîn. We distributed brochures and hung posters in these cities. Many men did not know the history of the International Day for the Elimination of Violence against Women.  We told them the history of this day. We visited Jinwar village and held a seminar in Qamishlo as part of this campaign. We held a conference with the motto, ‘Because You Are Free’ in cooperation with the Women Pioneers’ Network and the Şawişka Women’s Association for victims of violence,” Reca İsa says.

Stating that Sara Women’s Organization formed a committee called, “Violence Monitoring Committee, Reca İsa says, “This committee is important to combat against gender-based violence. The committee members follow the cases of harassment, rape, violence, femicide, and suicide. The court and Women’s House support us to follow these cases. When the court does not grant women their rights, we have the right to object to it. We don’t accept women to be deprived of their rights.”

Mentioning that violence is increasing all over the world, particularly in the Middle East, Reca Isa states that there are cases of suicide due to the psychological war against their region. “In NE Syria, 39 women were killed by men, 92 women were subjected to violence, 24 women received death threats, 5 women were subjected to abuse, 34 women committed suicide and 24 women attempted to kill themselves in 2021. We, as Sara Women’s Organization, try to end violence and build a safe life for women.”

They will open new branches in 2022

Reca İsa tells us their plans for 2022. “We will open branches in Derik, Raqqa, and Ayn İsa. We will continue to hold seminars and launch campaigns to eliminate gender-based violence.”