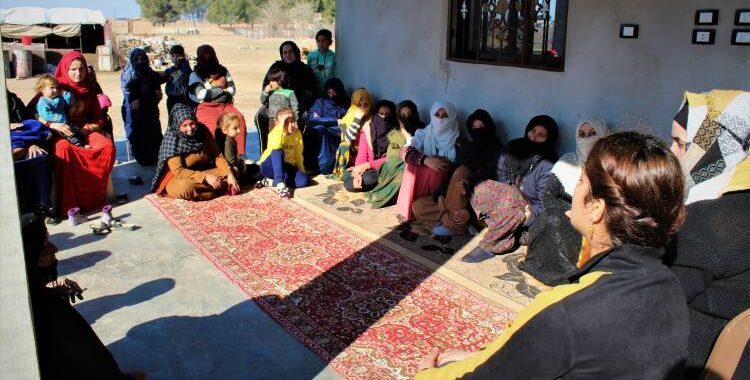 The  Economy Committee of NE Syria has developed many projects to empower women’s economy in Til Temir. The members of the committee visit villages to implement their projects. “Our aim is to develop an independent economy,” they say.

Hesekê – The Economy Committee of NE Syria has developed many projects on agriculture, tandoor [traditional bread baking], plastic house [greenhouses], production of furniture, and animal husbandry to empower women’s economy. While the committee develops projects according to the needs of each region, it aims to develop agriculture, tandoori, and poultry projects especially in Til Temir (Tall Tamr). The members of the Economy Committee of Kongra Star have visited villages to implement their projects. [Jinha] spoke to Zehra Mihemed, executive of the Economy Committee, about their projects for women.

The tandoori projects will come into effect

Stating that they have held meetings in 2022, Zehra Mihemed said, “We try to develop projects by taking the opinions of women at the meetings. This year, we have developed tandoori projects for mothers and wives [of] martyrs. These projects will come into effect soon. We will supply flour and diesel for women. Women will bake bread and sell them to make a living.”

They develop other projects

Zehra Mihemed stated that projects such as sewing and poultry are recommended for women from Serêkaniye living in Hesekê. “We haven’t implemented these projects yet due to some obstacles. But we aim to overcome these obstacles and implement these projects in the upcoming days,” she told us.

“Women’s economy should be empowered”

Pointing out that women’s economy should be empowered, Zehra Mihemed said that their aim is to support not only women but also their families. “We want to support the women affected by the war and who lost their spouses.”

We work for women to have an autonomous economy