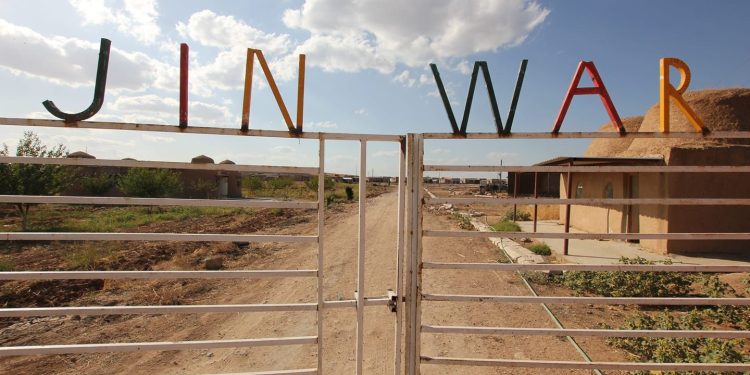 Jinwar is a village made by women for women in Rojava

When walking in the streets where the Rojava/northern Syria women’s rev­olution has been taking place over the past years – a revolution greening on its own sprouts -, history served as our guide. We came across statues of goddesses, names of villages, poems,  folkloric stories, traditional fertility tattoos on women’s bodies (deq), symbols and signs on the walls of people’s homes… We travelled through many villages that carried the names of women: Gundê Selma, Xezalê, Xa­tunê, Xizne, Hermel, Tuz Ana, Derin Ana, Cirn Ana, Kaya Ana, Kırk Kızlar, Kız Tepesi, Gozelte­pe and many others. All of them provided us with the means to imagine our dreams, with their historic fabric and knowledge treasures.

We started our construction period with a group of friends. Apart from a concrete life-form, our project was to constitute an answer to the question of “How to live?”. The construction of Jinwar women’s village was welcomed, fol­lowed, and supported by everybody, who had contributed to the Rojava revolution, with enthusiasm and excitement. Soon, our numbers increased and so did the richness and diversity of thoughts, ideas and perspectives that creat­ed the village. Everyone welcomed our desire to create an ecological women’s village, whose economy would be based on farming, agricul­ture, and women’s manual and mental labour.

Instead of using concrete in the village’s ar­chitecture, we preferred to use mud-bricks for the airy, single-floor houses with large court­yards, as we had sufficient experience and knowledge in this regard. We evaluated settlement models that would enable a communal life, where mothers could comfortably raise their children and where life was generally ac­cessible and functional. Through a long pro­cess of discussion, we came to the conclusion that each home should have its own garden, that each resident should be given a designat­ed piece of land to meet their seasonal needs, that agriculture, farming and gardening areas should be made available to meet the self-sus­tainability of the needs emerging from commu­nal life, and that efforts ought to be made to plant trees in the village. As these discussions went on, the area where the village was to be built was determined. Thus, the village con­struction started with the tree-planting process.

Jinwar is a free space for women

Apart from discussions concerning the village’s life system and construction, we wanted to come up with projects for children. When discussing the education system, we took care to enhance the children’s joy to learn by paying attention to things such as providing large green areas and round classrooms. Special care was taken to assure the existence of playing facilities for children, as well as means for women to engage in social activities and work to enhance their ability to develop their talents and learn new skills. The homes were designed to constitute a circle and to face each other, so that they simultaneously serve as the walls of the village. The centre is the designated playground for the children.

Apart from the 30 homes and the school system, the ‘Aşnan’ bakery, ‘My sister’s shop’, the ‘Şifajin’ natural health center and the ‘Jinwar Academy’ were built. If we also count the animal shelters for our ecological subsistence econo­my, we can speak of a total of 50 buildings in our village, including homes and institutions.

To find a visual representation of our life, we wanted to decide on a symbol. We began considering different symbols, such as the Shahmaran, the Queen of Snakes, a regional feminine mythological creature that represents fertility, abundance and wisdom, or the Meso­potamian goddess Kubaba with pomegran­ates in her hands, or the northern Syrian fertil­ity goddess Atargatis, or the historic Ashnan, Mesopotamia’s goddess of grain. In the end, we concluded that our symbol should be the hermel plant (Syrian Rue or perganum har­mala), which grows on the black-soiled hills and is used by Kurds, Arabs, Syriacs, Assyr­ians, Armenians, and Chechens in the region as an everyday home remedy. The plant is believed to remove negative thoughts and to be a cure for more than 200 different illness­es. We picked the common wall decoration made from hermel as the symbol of Jinwar.

While everyone was flooding to the empty state to lay the first foundations of our home, there were many discussions on the name for the village. Soon, we decided it should be Jinwar. Jinwar or Warê Jinan means the “living place of women” or the “habitat of women”.

As our research, cost calculations, infrastructural and logistical planning (construc­tion equipment, vehicles, roadworks etc.) went on, we began making mud-bricks. For this, we consulted workers and knowledgeable people. Whoever was curious about our work, dropped by our place. In the spirit of the village, multi-lingual, multi-cultural groups met and joined efforts for the village’s construction. The complimentary harmony between the many languages and cultures that provided helping hands seemed so natural and exciting that we often forgot that we didn’t speak the same language! Through a combination of mimics, gestures and collective work, we managed to communicate and understand each other. Sometimes, we had to collectively carry soil to our place from other areas. We made hay, we carried stones on our backs and in our laps.

We overcame our most difficult tasks with the help of all the guests that came to visit us. While our guests from Europe put covers on the mud-bricks to protect them from the rain, Arab women were pushing their stuck cars out of the mud. Some people were very curious about our situation, but too far away, so they tried to support us over the phone. This way, even the hardest tasks became enjoyable. The local administrations did not wait for a call or invitation to bring us materials and tools that we required. Different institutions of Rojava came in groups to ask for ways in which they could support the construction of the village. Women electricians and carpenters from differ­ent parts of the world expressed their wish to travel to the village to work. There were plenty of women, who believed that life here would be beautiful, even before the women’s village was built. As the project developed and took shape, the society became increasingly more excited. Everybody wanted to participate, even if it meant to only put one stone on another. Not a single moment passed without ac­tion. Even during tea breaks or meals, we tried to come up with solutions to problems we faced. We discussed ways in which we can improve our ability to cooperate. There is a saying in Kurdish: “tekîliyên bi nan û xwêy” – bonds through bread and sweat -, which seems to have been updated with the construction of Jinwar. We really managed to come up with a relationship style that share and produces everything without self-interest.

The construction of the women’s village start­ed on March 10th, 2017, right after the 8th March international women’s day celebrations, and opened its doors to the residents and work­ers on November 25th, 2018, the international day against violence against women. Women started applying to live in the village, even while the construction work was going on and moved in as the homes were finishing. They led the opening ceremony of their own, new homes.

The women of Jinwar wanted to run them­selves based on democratic principles that re­spect everyone’s rights and assure everyone’s ability to participate in life as equals. Thus, the Jinwar debates about the women’s council of the village began. Every woman, who settles in the village can participate in the village coun­cil and help plan the village life. Jinwar women can collectively bake their bread in the bakery or cook and eat in the communal kitchen. At the school, the academy, or the health center, as well as in the realms of agriculture, me­dia, and diplomacy, every woman can take up responsibilities based on her own wishes. She can shape social life, welcome visiting delegations, run the shop with her own prod­ucts according to her own needs. She can get education and join discussions at the acade­my. She can discuss and share her views on woman and life, free co-life, women and eth­ics-aesthetics, women and ecology, women and economy, women and history, women and health/natural health. Women can of course arrange for their needs beyond the village as well, they go on family visits or invite and host their loved ones to the village. But men are not allowed to stay in the village overnight.

When the women tell their stories to each other, it becomes obvious that each of them is expecting the beginning of a new journey with their life in the village. In the discus­sions held in our everyday life, women con­stantly express their happiness: “How great that we exist, how great that we are together, how great that we are here. Every women’s group can be able to imagine and create such spaces and villages for themselves.”

Jinwar came into being as the collective ef­fort and labour of Kurdish, Arab, Armenian, and Circassian volunteers and working women. Jin­war has been built on the soil of barren farming estates, a stony and dry piece of land, where animals would graze and children would play in the summer. For the first time, this piece of land is experiencing a creation period of such dimensions: its own soil, water, and stones provided the basis for the building of an entire village of women. It constitutes a geography for different communities, cultures and beliefs to blend with each other in the creation of a new life. Every person, stepping on this soil, is filled with the joy of contributing something to this historic undertaking. Today, women in Jinwar re-create themselves from their ashes to develop their own self-determined identity.