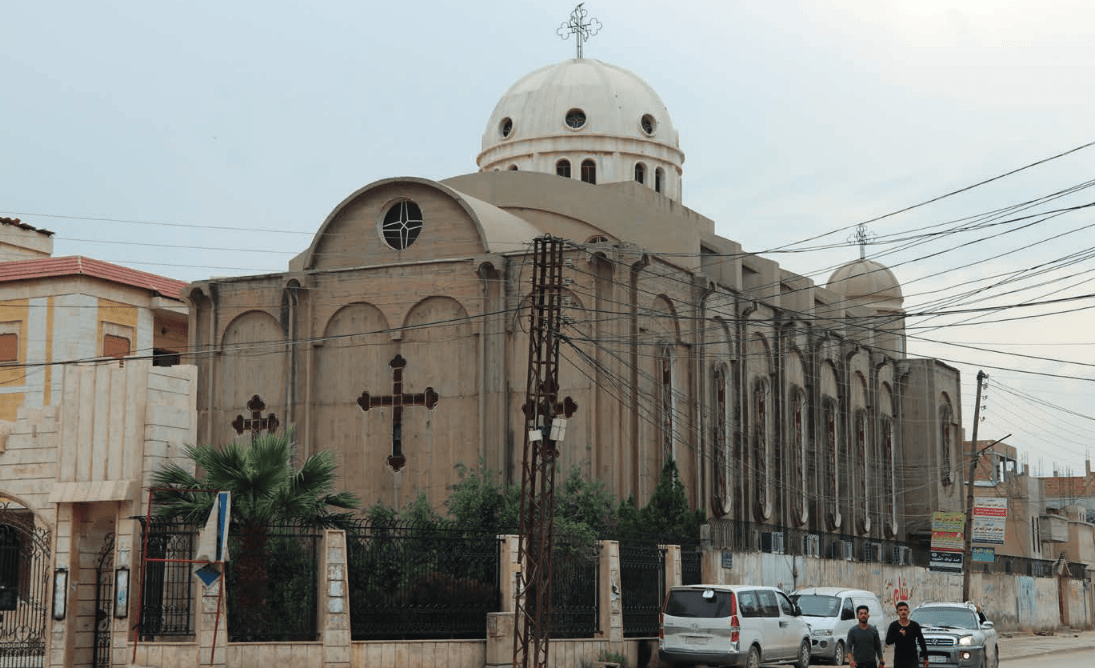 The Assyrian and Syriac Christian communities in North and East Syria trace their origins to the Assyrian empire, a Mesopotamian kingdom in the ancient Near East and the Levant that existed as a state built around the Assur city-state from 2500 BC. It was one of the first empires on earth. Despite the empire’s collapse in 600 BC, its remnants survived as a geopolitical entity, for the most part ruled by foreign powers. Before the roman conquest, their language, Aramaic, dominated the Middle East as far as Iran as the language of trade and commerce. Christianity arrived in Assyria between the early first and third centuries, when the Assyrians began to gradually convert from the ancient Mesopotamian religion to Christianity. During the fourth and fifth centuries, a schism developed over the nature of Christ. Over the course of 2500 years, the Aramaic spoken by different denominations developed into mutually unintelligible versions. Three of these varieties are still spoken as a mother tongue:

Western neo-aramaic: spoken in the Anti-lebanon region to the north-west of Damascus

Eastern neo-aramaic or ‘turoyo’: the mother tongue of most Syriac people in Syria

Assyrian-aramaic: the mother tongue of most Assyrian people in Syria

The two latter varieties, still spoken today by Christians, are the most important minority languages in the Jazeera region of North and East Syria. But over the course of centuries, many Syrian Christians have undergone a process of Arabization and now generally use Arabic in their daily life, a practice that even extends to religious services in some instances.

‘These differences exist because our people don’t know their history. The regime wants them to think that they are originally Arabs. They just know what they learned in school, that the history of Syria is just the last 1500 years since Islam came. So how can these people know their own nationality? Solely through their relation to the church. So if someone says “I’m Syriac,” it’s because he is related to the Syriac church, and the same with Assyrian and Chaldean people.’ — Malak Hanna, Syriac Red Cross

At the end of the 19th century, the Ottoman Empire engaged in a series of acts of ethnic cleansing, constituting genocide against minority communities living within its borders. These events had and continue to have a profound influence on the history, culture and politics of Christian communities across the Middle East in general and North and East Syria in particular. In 1892, Sultan Abdulhamid II ordered a campaign of mass conscription or murder of Yazidis as part of his campaign to Islamize the Ottoman Empire, which also targeted Armenians and Christians in general. The principal genocide occurred in 1915, conducted by the so-called Young Turks against the Armenian, Greek Christian and Syriac-Assyrian peoples. Around 1.5 million Armenian and over 750,000 Syriac-Assyrian people were killed in this genocide, known to the Assyrians as Sayfo (sword) and to the Armenians as Aghed (catastrophe). Besides pogroms and massacres throughout their traditional homeland, and the forced conversion of millions to Islam, Armenians were lined up and made to walk towards the Syrian desert in convoys tens of thousands strong. Although the expulsions resembled deportations, brutal treatment at the hands of the guards overseeing the marches made clear that their real agenda was the planned elimination of the Armenian population through a process of starvation and exhaustion. Others either survived the death marches or otherwise escaped to neighboring countries. When refugees arrived in Syria, they were distributed all along the border regions of Syria, including in what is now North and East Syria.

More recently, life for all people in Syria – Christian communities included – has of course been dominated by Ba’ath rule. under the Ba’ath governments which first took power in 1963 and came to be dominated by the Assad family by 1970, many minority groups were denied the right to publicly express their identity or engage in cultural or religious practices. Christian minorities were free to study their own language, but only privately. Their identity was kept alive through religious practice and via the oral transmission of tradition and culture. It was common for Christians to work as employees of the Syrian Government and join the Ba’ath party, often reaching high levels in the government of the Syrian Arab republic. In 1982, when the Muslim Brotherhood attempted uprisings in Aleppo and Hama, the Syrian Government arrested many Christians on suspicion of being related to other groups or parties, due to the fear of external forces outside of the Ba’ath Party. Some of the Christians arrested at that time spent up to 35 years in jail.

In North and East Syria, the Syriac community, also known as the Aramean community, is organized around the Syriac Orthodox Church and the Syriac Catholic Church. The largest church in the region is the Syriac Orthodox Church , an ancient Christian Church tracing its history to Saint Peter and Saint Paul and their time in Antioch in the 1st century. There are large communities of this Church in Qamishlo, Derik, Sere Kaniye and many other towns close to the Turkish border. In the 17th century a split in the previous church resulted in the formation of the Syriac Catholic Church. Although they have their own rites, they accept the Catholic Pope as their spiritual leader. There is an Archeparchy of Heseke and Nusaybin, with eight parishes and about 5,000 believers, headed by Archbishop Jacques Behnan Hindo. Under the Ba’ath government there was never a serious survey of the population figures of any minority, but a rough estimate suggests that more than 40,000 Syriacs lived in the Jazira region prior to the war.

The Christian Assyrians of North and East Syria are organized around the Assyrian Church of the East (whose followers are also known as Nestorians). Their members lived in Hakkari (in present-day Turkey) until they were killed and driven out of that region during the 1915 genocide. They were resettled across 64 towns in Iraq, but in 1933 they became victims of the Simele massacre committed by the newly-formed Iraqi Army, in which at least 10,000 Assyrians were murdered. About 30,000 survivors fled to the french Syrian protectorate. They established the towns of Heseke and Tel Temir and around 35 villages between those two cities, along the Khabour Valley. This region was home to around 25,000 Syriac-Assyrian people. However, many of them left when ISIS attacked their villages in spring 2015. There is a huge diaspora of Assyrian people all around the world. The USA has the largest community, with about half a million members. The Assyrian Church of the East also has a Catholic branch, the Chaldean Church. Today it is the largest Church in Iraq and has some parishes in North and East Syria as well. They belong to the Chaldean Catholic Eparchy of Aleppo that had about 30,000 believers before.

Most of the Armenians who arrived in North and East Syria following the 1915 genocide are members of the Armenian Apostolic Church, who operate their own church communities and schools in Qamishlo, Derik, and Heseke. This community also has its own Armenian Catholic Church , with a parish in Qamishlo. There was an important Armenian community in Kobane prior to ISIS’ assault on the city, and Armenian communities in Afrin, Tel Abyad and Sere Kaniye until the two recent Turkish invasions. Armenians can also be found in Deir-ez-zor. Many ethnically Armenian people have been assimilated, and are now practicing Sunni Muslims, making it hard to arrive to an estimate of their population in the region.

In North and East Syria there are also small parishes of the Greek Orthodox Church of Antioch, part of the orthodox Church under the Ecumenical Patriarch of Constantinople, and its corresponding Catholic church, the Melkite Greek Catholic Church. The Evangelical community is made up of Kurdish and Arab converts, meaning this small community also vulnerable to attacks by radical Islamic factions. Former Sunni Muslims attending Evangelical services may also face suspicion from their neighbors. Such a church with three parishes existed in Afrin until 2015. They include the Church of the Good Shepherd, built in 2012, with roots in the Evangelical union Church in Aleppo. Following the occupation of Afrin this church now operates in Shehba, with a congregation of about 150 families, a number three times lower than before the occupation. However, following the invasion of Afrin, a number of Muslim families started attending the church for the first time. There are also small evangelical communities in Derik and Kobane.