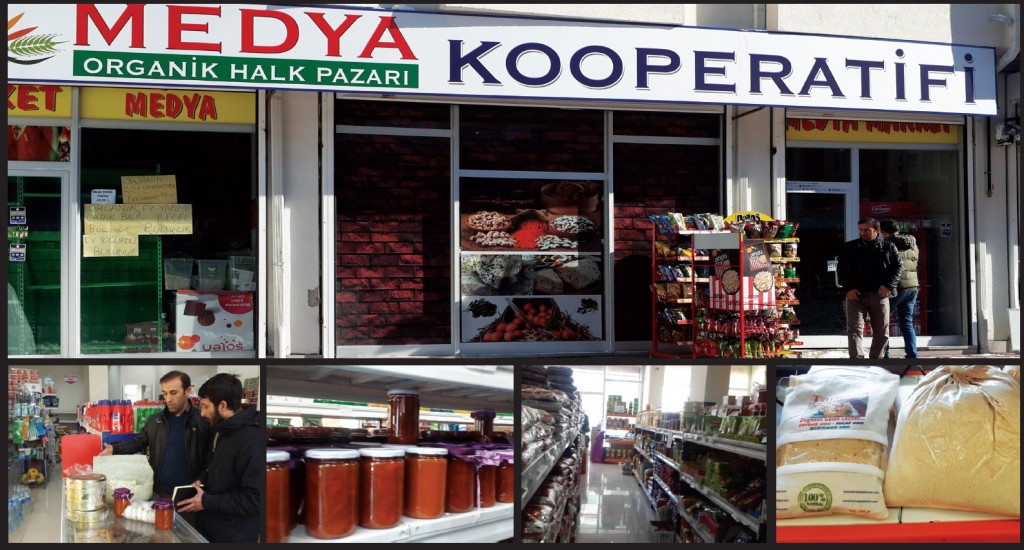 Meydan: How long has Wan Market, part of the first consumers’ co-operative in Kurdistan, the Medya Consumers’ Cooperative, been open?

Medya Consumers’ Cooperative: Actually, this is the original location of the cooperative. This market has been open for 7 months. The project for this, along with projects like the registration for the cooperative, has been made in a year long adventure. This project is a first in Kurdistan. Some institutions had set up cooperatives as part of their own organization. For instance, in Colemerg, there were cooperatives that restricted their activities to their own members, and these were bound to the state anyway. With this project, we wanted to contribute to the community as a whole.

Shopping malls seek to extend their influence, forming monopolies for increased exploitation, and making people dependent on themselves as consumption venues. How does the Medya Consumers’ Cooperative aim to challenge this?

The so-called chain stores buy their products from outside of the region and produce outside the region. This situation leads to the inability to make use of locally produced goods. We have underlined this many times. Our goal is to support the local producers. We buy the product from the local producer in Wan at their own prices and sell it at the same price. There are products which cost 5 piastres at the field but are sold at 15 piasters in the market. We reach out to these producers and try to create the opportunity for them to sell their products at the original price.

As far as we know, the market is also trying to increase employment. How many people does the market employ?

At the moment, we have 4 friends working in our market, but we are not only aiming to employ workers. We also want to indirectly stimulate employment in production, such as encouraging the producers to carry on with production when they can see that their products have increased in value.

How does the market operate in contrast to exploitative capitalist relations?

The cooperatives are essentially founded on a democratic bases. While capitalism creates a system based on the extraction of money from money, we do the opposite. As opposed to money, we want to emphasize the value that comes about from labour. In this sense, we try to divert our friends that come to our meetings towards production; we explain that instead of trying to extract more profit from their individual production, they should work with a communal logic. At the moment, we have 183 members and we are working all together. People get to see that as a result of communal effort, diverse products can come into being, and that solidarity can defeat capitalism. Here we don’t have a profit motive, we share the revenue, we sell the products at their original price and remove the thirst for profit.

Cooperatization is sharing. Everyone contributes what they can. Some have a specialized knowledge which they share; students come to help us. We don’t tell them to bring their products so we can sell it for them. The producer arrives and leaves their products here, and collects the money themselves once they are sold. Or, if a beekeeper sells their products here, they can choose to take products that they need in return, instead of the money. At a time when everything is subjected to the logic of capitalism, we minimize the role of money and set up barricades against capitalist intrusion. We must mobilize ourselves with the rest of the society to stand up to this.

What are the different products on sale? Will locally produced goods find their way to the market?

Our main goal is to valorize local products here. If we didn’t include these here, we would have no difference from the markets that operate according to a capitalist logic. For this reason, by bringing the sesame oil in Bitlis, the pepper from Amed, olive and olive oil from the Elih and Riha region, we work to give producers unmediated access to the consumers.

We formed our cooperative to set an example. We are trying to facilitate a collaborative effort to create a cooperative that binds together producers at the neighbourhood level. Apart from this, we have a women’s cooperative named Bika-Koop, where we also allocate a place for the products they produce. Additionally, we are in contact with a beekeepers’ cooperative and other cooperatives.

Finally, is there anything else you would like to add?

More organizations like this should be created. These experiences are a resistance against exploitation. To abolish exploitation, people need to see that they can produce communally and this is the only way to throw off the yoke of capitalism.