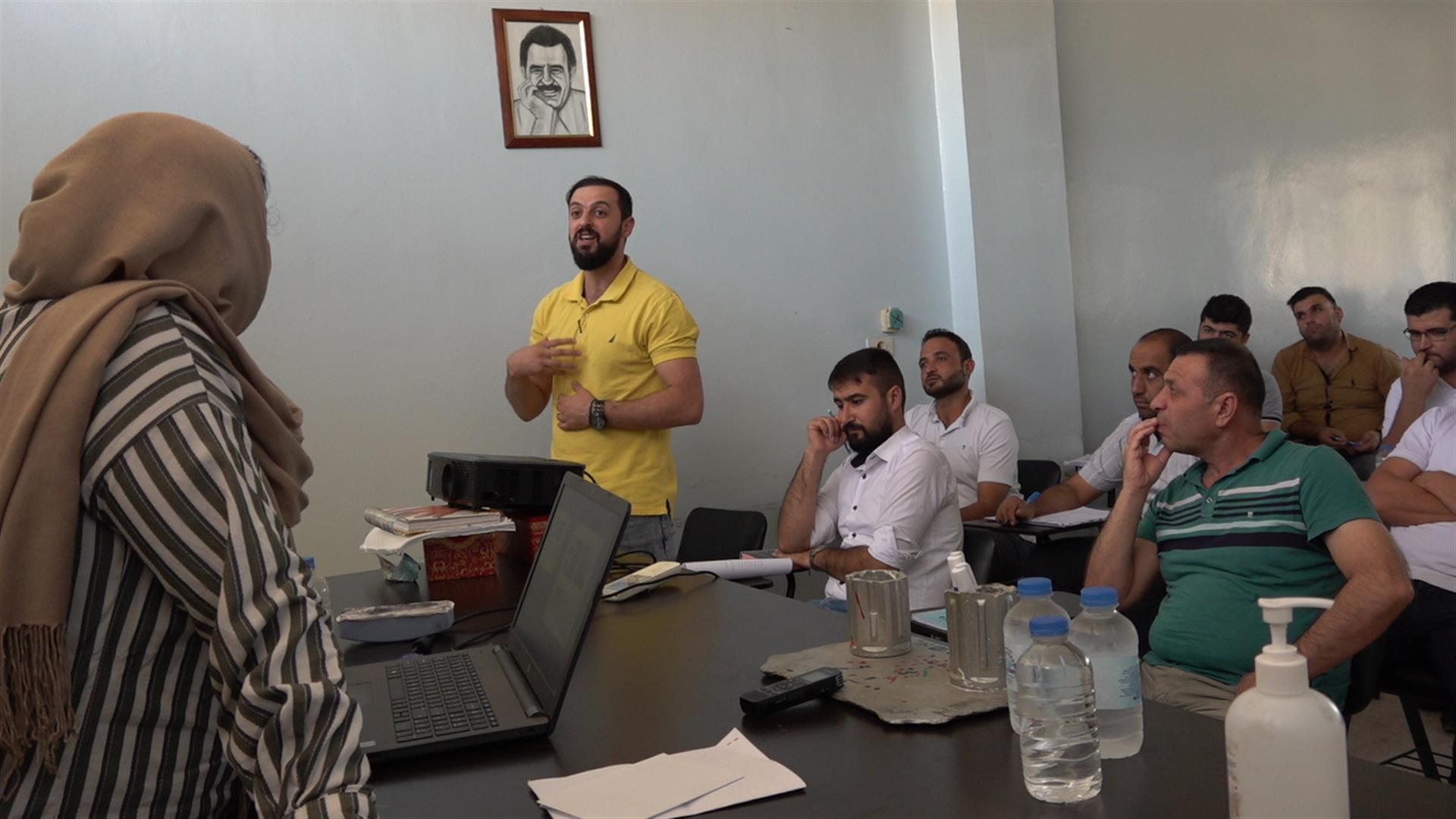 During the year 2022, JINEOLOJI conducted many social studies and research, such as conducting studies on women’s psychology, morals and beauty, family relations, reasons for divorce and the resistance of Sheikh Maqsoud‘s women, in addition to conducting studies on every region in North and East Syria; to clarify its historical background.

JINEOLOJI considers training as one of the arenas of life, and attaches great importance to it. During the past year, about 10,000 women and men received training, while about 457 seminars and lectures were held on the equal and free life, and the definition of types of violence against women and ways to confront and eliminate them.

These trainings are organized on the basis of understanding the social reality, and target all segments of society, starting with communes, military and civil academies, and academies affiliated with institutions, such as justice institutions and the Democratic Society Movement (TEV-DEM), and all the way to the media.

Member of the JINEOLOJI Academy, Alia Amara, considered training an essential part of the work of the JINEOLOJI academies and training centers, which organize themselves on three main items: training, studies, and publishing. And she emphasized that women’s knowledge; It aims at liberation from gender intolerance, and building a democratic life in which equality and justice prevail.

She pointed out that women’s science or JINEOLOJI is directly related to life through training, saying: “It is not a purely scientific subject, but rather a life subject. Therefore, we follow several methods in training, including theater that follows existing reality, dialogue, debate, and preparing short film, as it is a gateway to knowing the truth.” self-discovery, and social relationships.

Alia stood on the reasons for targeting the Turkish occupation state through its intelligence arms in Başûr (Southern Kurdistan) for the activist, academic and member of the JINEOLOJI Research Center, Nakhan Akarsal, saying: “Because women’s science is a science based on participatory democratic foundations and on the principle of society’s freedom through women’s freedom, it also seeks to end an authoritarian era, the Turkish occupation was nothing but targeting a pioneer of this science.

She indicated that the attempts of the Turkish fascist state to undermine women’s struggle by targeting them directly failed, saying: “The echo of the revolution of July 19, 2012 and the accompanying mental revolution extended outside Rojava and North and East Syria. Even in Rojhelat (Eastern Kurdistan), the slogan emanating from Rojava was chanted: “Jin, Jiyan, Azadî “The state opposition to democratic ideas was nothing but targeting the pioneers and fighters of this idea, such as the martyr Nakhan Akarsal.”

Alia promised that targeting the fighter Nakhan “targets the women’s movement as a whole,” affirming “not surrendering to the policies of the enemies and following in their footsteps until freedom is achieved for all women and society.”

In her turn, a member of the JINEOLOJI Research Center, Nofa Ali, mentioned the mechanism of the research center, which operates on two foundations; “What are the reasons for conducting research, and what is its necessity?”, saying: “We conduct research on the basis of the community’s need for topics of interest, the difficulties and obstacles it faces, and ways to solve it?”

Attention is drawn to the reliance of JINEOLOJI Research Centers on conducting scientific research based on practical experience through religion, myths, society, books and curricula, taking into account the opinions and visions of community members.

The video below sadly does not contain English subtitles.