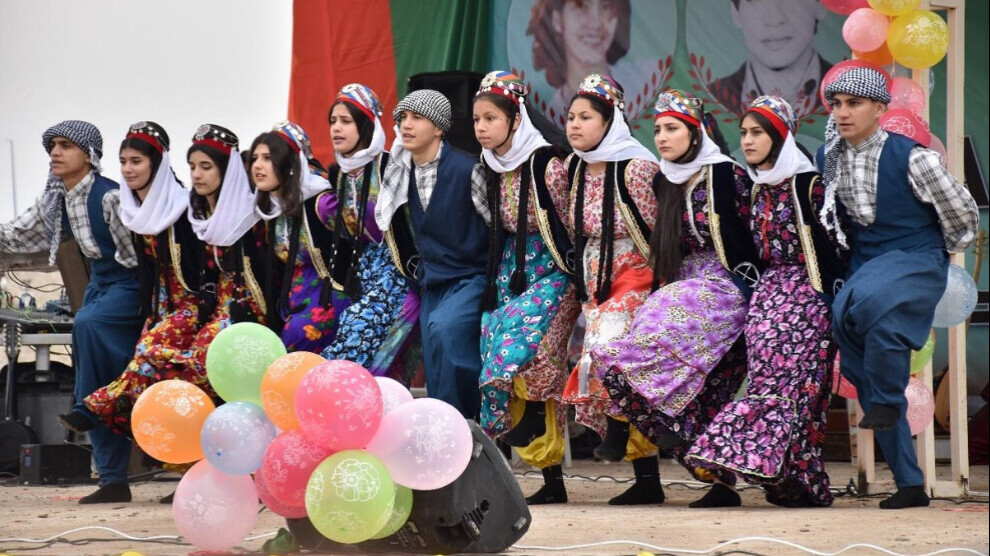 The cultural movement Hîlala Zêrîn in Northern and Eastern Syria is a movement of women created to preserve their cultures and for cultural self-defense against the patriarchy.

The cultural movement Hîlala Zêrin mainly carries out educational work and cultural self-organization work with women and children in Northern and Eastern Syria. Its approach is to bring people of different ethnic, religious, cultural and linguistic identities together on an artistic and cultural level and to encourage them in their creativity.

Hîlala Zêrîn has made it its mission to preserve women’s history and reality and to shed light on women’s past. In particular, structures of women’s liberation and the culture of communal society are promoted on an artistic level. In short, communal society means a grassroots, ecological society in which women are liberated. This idea of ​​communal society has a deep historical dimension, dating back to the Neolithic. This is also reflected in the name of the association. Hîlal means crescent moon and Zêrîn means golden. This refers to the “Fertile Crescent”, a crescent-shaped territory demarcated by the Zagros and Tauros Mountains, where the first steps of the Neolithic Revolution and the Urban Revolution took place, and where there is clear evidence of early matriarchal societies.

The organization that preceded Hîlala Zêrîn was the Kevana Zêrîn movement, which was founded in Qamishlo in 2016. In 2020, the movement was renamed Hîlala Zêrîn. Hîlala Zêrîn is organized in Qamishlo, Hesekê, Shehba and Kobanê Canton. Typical of the grassroots organizations in Rojava and Northern Syria, the work is carried out by self-organized committees. For example, there are media and archives committees, education committees, and diplomatic committees. Especially in the city centers, Hîlala Zêrîn runs a whole range of cultural activities, from workshops for music and instruments to theater and folklore and painting.

For this year, the movement is preparing to build facilities for film production. The cultural movement attaches particular importance to the education of children. Young people aged 6 to 15 are taught how to express themselves and their culture through folklore, theater and painting. These activities are attended by people from all ethnic and cultural groups in North and East Syria.

Danger of extinction has been overcome

Fewaze Mihemed of the Cultural Movement Coordinator Hîlala Zêrîn explains: “Hîlala Zêrîn has organized to bring back to light the identities that have been on the brink of extinction through cultural genocide. The mental and cultural assimilation of the peoples had to be broken. This is exactly the role that Hîlala Zêrîn played and continues to play.”

Mihemed criticizes that, because of the patriarchy, women were denied the opportunity to bring their art into society: “Thanks to the Rojava revolution, which is supported by the women’s liberation paradigm of Rêber Apo [Abdullah Öcalan], women have gained the opportunity to express themselves get to know yourself. Women have come together to defend their rights and learn their own strength. Today, women step onto the stage and show off their skills without any problem; they can express themselves however they want. The feelings they have been deprived of for years are revived through art. Through culture and art, they convey their passion, pain, excitement and love for life.”

Mihemed says that Hîlala Zêrîn prioritizes education: “Wherever there are women, there is Hîlala Zêrîn, comprehensive efforts are made to reach all women. Organized women are essential for preserving and defending the culture. We are very interested in all activities of groups affiliated with Hîlala Zêrîn, but we are not limited to this. Our priority is organizing women. As a cultural movement Hîlala Zêrîn, our ultimate goal is to reach women in all cities. Disorganized and uneducated women mean a disorganized and uneducated society. The mental change of women causes the change of society.”

The education of children in particular is of great importance, says Mihemed and continues: “A child who does not grow up with his own culture cannot protect his country or his culture. So that the children can develop well, we provide cultural education, which we will continue to expand.”