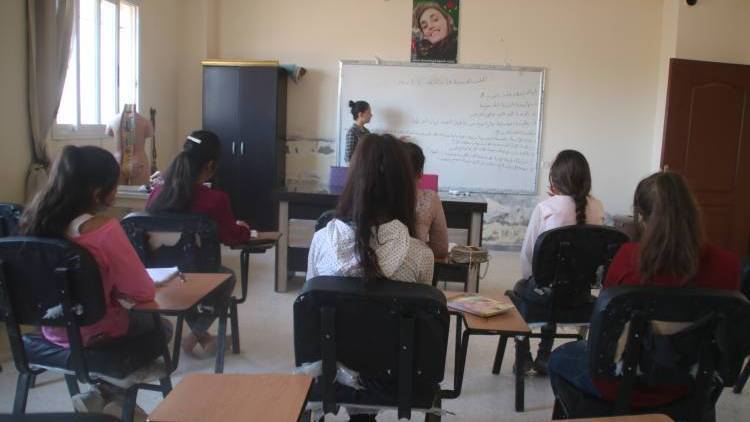 Syrian Free Women’s Foundation works for women in every part of life. The foundation has recently begun to work for the education of women and children.

The main purpose of the foundation is to stand by women in every part of life. The foundation also carries out works for children’s education and psychology. It organizes training courses, such as tailoring and language courses for women to offer them employment opportunities. It also organizes seminars on women’s health and violence against women. The foundation also has a Keskesor Area, an area to learn English, Arabic, and Kurdish, and a special section for children who lost their parents in the war.

The foundation held its first congress on June 18. NuJINHA spoke to the members and managers about the projects and works of the foundation.

She is both manager and teacher

Diyana Ehmed is one of the Syrian Free Women’s Foundation managers and a computer teacher. “The people aged between 15 and 35 can join our 2-3 hour courses every day. After three months, we give them certificates so that they can work elsewhere,” Diyana told us. The women and children also take language courses; the language courses are free for them. The foundation also opens a free tailoring course this year. “We also hold seminars to raise awareness of women about their health and violence against women,” Diyana said that children attend language courses during vacations.

Women should know their health

Lara Himêdi is a member of the health committee of the foundation. “We give theoretical information about women’s health because there is no center to give women such information. Everyone should learn first aid. Pregnant women need to know what they should do when they have a problem. Women tell their neighbors what they learn here.”

Medina Qadir is a tailoring teacher. She believes that every woman should work to get their economic freedom. “I have to look after my children and I come here to learn how to sew. We learn many things here,” said Enzilxe Bozan Oso, one of the course attendees.

Emine Şêx Elî, one of the managers of the Ari Center in Sirin city, told us that the Ari Center provides great opportunities for Arab women. Before the opening of the center, the women had difficulties going out in the city. “The society in Sirin is a feudal society. Women face many difficulties here. But after the opening of the center, many women visit our center and they attend our works.”