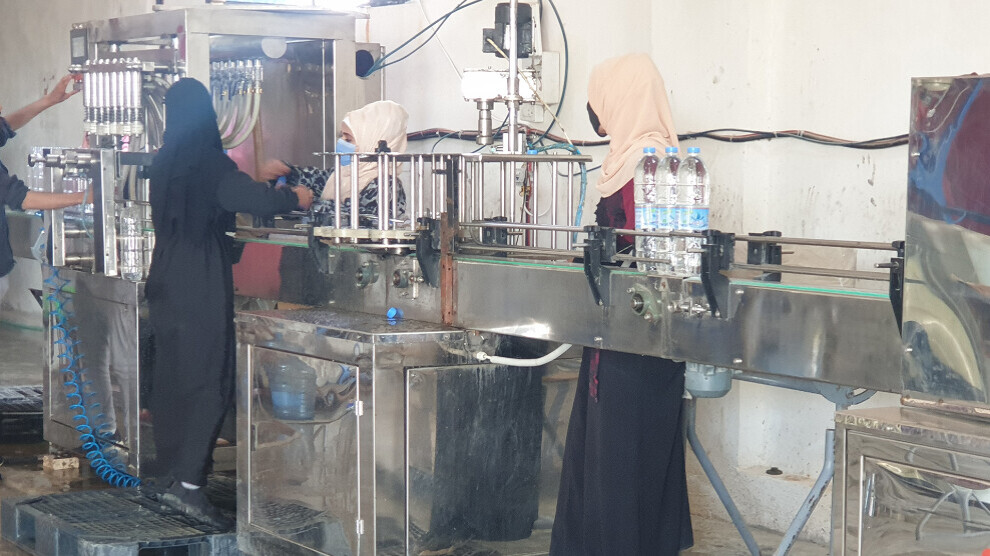 Seven women work in the Fırat Water Treatment Plant opened in Raqqa. Stating that they shoulder many tasks at the plant, they drew attention to the economic problems faced by them.

The Fırat (Euphrates) Water Treatment Plant was opened in the city of Raqqa in 2021. Women are particularly employed in the first plant in Raqqa. In the city, which was the de facto capital of ISIS, women’s participation in the labor force is supported. For now, 40 people, including seven women from Raqqa and Deir ez-Zor, work at the plant. The employees preparing 40,000 bottled water packs every day send these bottled water packs to the cities of the region. Although there are many water treatment plants in Syria, the plant in Raqqa serves the people living in many cities.

She works both in agriculture and plant

Qatemi al-Raşid, one of the employees of the plant, told us she left Deir ez-Zor about one year ago and started looking for a job. She began to work at the plant with the support of the Autonomous Administration. She works as an agricultural worker and at the plant to pay her house rent. “I am responsible for a machine cleaning the bottles and logo. Each of us is responsible for a different machine. The bottled water packs are sent to many cities such as Hasakah, Deir ez-Zor, Kobanê, Manbij and Tabqa. The bottled water packs are also distributed in Raqqa,” she told NuJINHA.

Batul Ebdilrezaq, another employee of the plant, told us that women working at the plant shoulder important tasks. “I have worked at the plant for two years. Our financial situation is bad. I work to support my family,” she said.

Unfortunately the video below does not contain English subtitles.