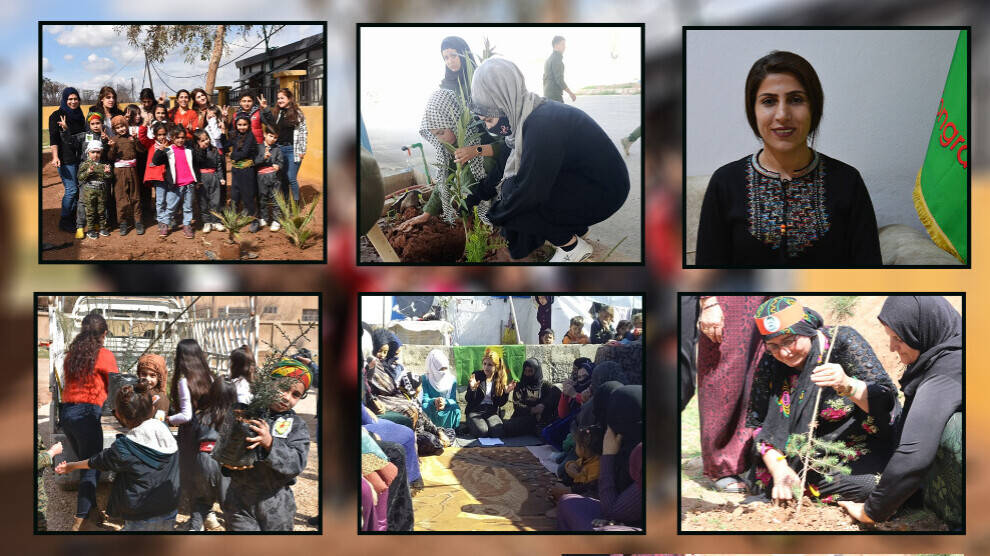 The Ecology Committee of Kongra Star has launched a campaign with the motto, “Return to social ecology led by women”. Rihan Temo, the spokesperson of the committee, told us that women have planted more than 3000 trees until now.

Protecting the environment is a duty for all people and everyone living on earth is responsible for it. In the last ten years, the nature of Syria has been destroyed due to the ongoing war, conflicts, occupation attacks, and use of weapons. The Ecology Committee of Kongra Star launched a campaign at the beginning of March with the motto, “Return to social ecology led by women” to protect nature. As part of the campaign, more than 3,000 trees have been planted and one hundred seminars have been held. We spoke to Rihan Temo, the spokesperson of the Ecology Committee of Kongra Star, about the campaign.

Emphasizing the importance of protecting the environment, Rihan Temo said, “We launched this campaign to turn our joy of spring into an ecological spirit. We have been going through a process in which we should protect the environment because NE Syria has been suffering from an ongoing war and invasion attempts for 10 years. Different types of weapons have been used in NE Syria and they have negatively affected the environment. We have lost our green areas due to the war. We launched a campaign under the leadership of women to protect nature and environment.”

“Our duty is to green the environment”

Speaking about the campaign and the activities of the Ecology Committee, Rihan Temo said, “This campaign makes everyone feel responsible for the environment. We aim to promote environmental awareness and education. We have held more than 100 seminars in villages and towns with the support of our Education Committee. We have planted more than 3,000 trees until now. This year, our main duty is to green the environment. We have distributed trees to each family to plant them. Our organizations have also planted trees. We raise environmental awareness in our society.”

Rihan Temo also gave us information about their next plans. “We have projects and we are working on them to realize them soon. In addition, we will launch more campaigns to change the mentality that has been imposed on us for years. We also want to plant fruit trees with the participation of citizens,” she told us.