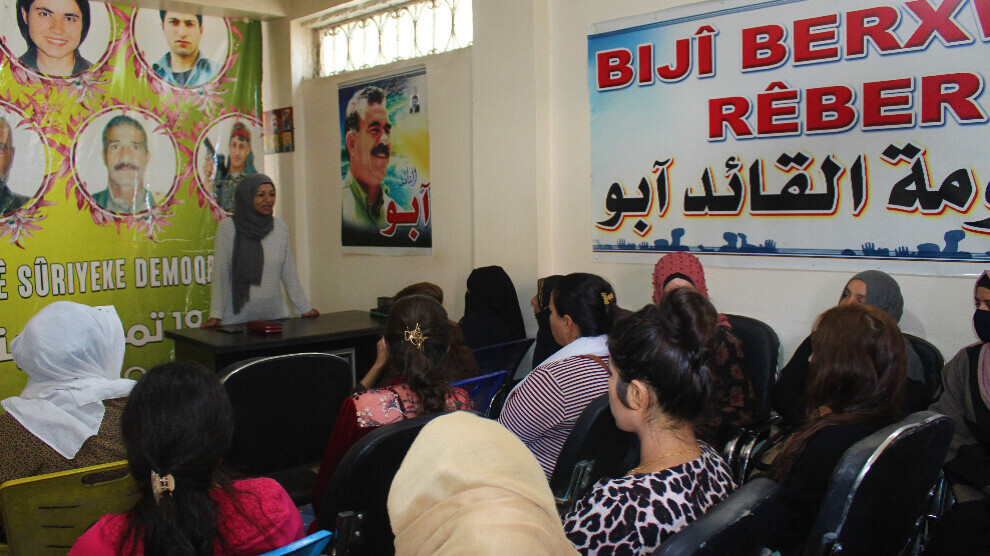 The Women’s Committee of Til Temir Council held a meeting with the participation of women co-chairs of towns and rural areas to develop new projects in order to minimize the effects of the economic crisis in the region.

The closure of the Til Koçer border gate, the embargo imposed on North and East Syria, and the ongoing Turkey’s attacks on the region cause many economic problems in North and East Syria. The Autonomous Administration has developed many projects to overcome these problems. Thousands of women suffering from economic problems earn their living by working in water treatment plants, clothing manufacturing factories, furniture factories, bakeries and canned food factories.

The Women’s Council and Women’s Coordination in the Autonomous Administration of North and East Syria (AANES) make efforts to lessen the burden on women and society in different ways. Today, the Women’s Committee of Til Temir/Hasakah Canton held a meeting with the participation of women co-chairs of towns and rural areas.

Speaking at the meeting, Women’s Committee member Zeyneb Eyo said that The Women’s Council and Women’s Coordination in the AANES make efforts to lessen the burden caused by the increase of the dollar value and embargo imposed on the region on women and society.

At the meeting, co-chairs suggested proposals according to the reality of the region. Many projects were presented by co-chairs; projects about agriculture, sawmills, canned food factories, poultry farms, cafes, carpet and wool factories. In addition, the Women’s Committee presented their livestock, commercial and industrial projects.

“Projects were presented to minimize the effects of the economic crisis”

Speaking about the purpose of the meeting, Zeynep Eyo said that they have developed projects in order to lessen the burden on women and society.

“The purpose of the meeting was to listen to women co-chairs and learn what their communities need. The projects will be led by women. The co-chairs suggested their proposals. We will do our best to overcome this economic crisis together.”

“The projects will prevent migration”