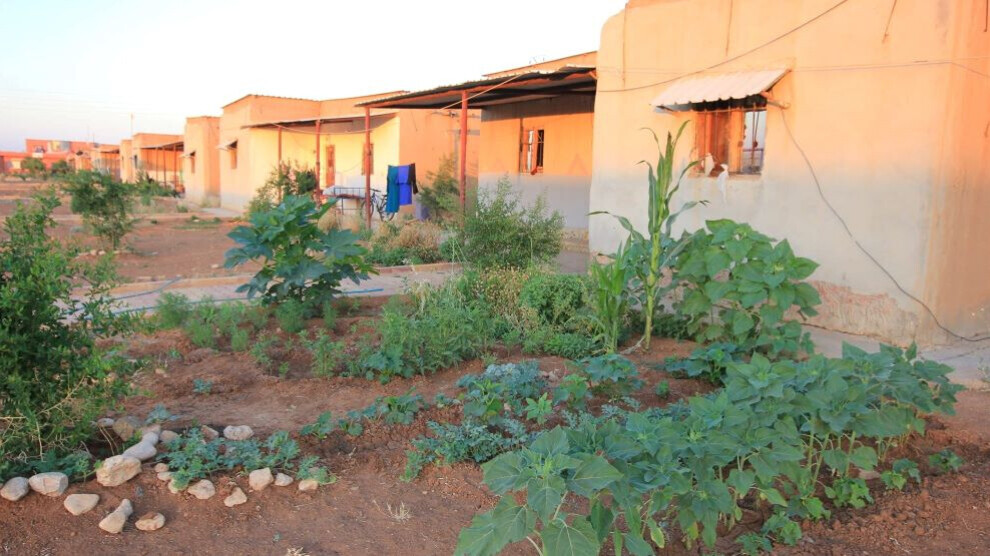 War is raging in the autonomous region of northern and eastern Syria, and Turkish bombs have also hit near Jinwar. Nevertheless, life goes on in the women’s village.

Life in the women’s village of Jinwar continues despite the Turkish attacks on the autonomous region of Northern and Eastern Syria. The residents share this in their newsletter for September: “Some time has passed since our last newsletter, and we are happy to give you an overview of the things happening and the current situation here in JINWAR and in the Autonomous Administration of North and East Syria. As we already mentioned in our last newsletter, since April 17, 2022, we are in an intensive phase of war. In the time between June and August there were many drone strikes and attacks carried out by the Turkish state against the people in the Autonomous Administration and especially also against women who are taking an active role in building up and defending the Region. We are remembering Jiyan Tolhildan, Roj Xabûr and Barîn Botan who fell as martyrs on 22 July 2022 on their way back from the Ten Years of Women’s Revolution Forum.”

Some of the bombings took place near Jinwar and this situation also has an impact on the village, the women residents write: “We are not afraid about the current situation but, of course, the sound of a weapon frightens the children. It has an impact on all mothers and children – if you want or don’t want it – especially when we hear about children getting killed. But despite all of that, it is clear to us, women and mothers, we will not leave the place and we will defend the village and the houses. Some mothers made a declaration to say, even with the threats of the Turkish state, they will continue to live here and build up another life in freedom. You might have also seen the video on our Facebook account where the children of JINWAR give a clear statement about the attacks of the Turkish state: “We must fulfill all our dreams. Down with Turkish occupation.”

“The village was and is always a lively place. Concerning the situation now, there are not so many visits and coming and going, but we are always happy about everyone who finds her way to us. There were journalists coming to our village to write about JINWAR and spread the idea of our village. As soon as their report is published, we hope to inform you via our social media accounts.

Despite the war situation, life in the village is going on and we are able to improve things and take new steps. We successfully finished one training for sewing. The women who participated in the training are now able to work independently in this field.

The Kurdish language classes for women are also continuing, which we also see as very important self-defense. The Kurdish language was suppressed for many years in all parts of Kurdistan and now, here in the Autonomous Administration of North and East Syria, we are able to bring the language back to life. But it is not only the mothers who are learning. At the moment the school is still closed for the children and it’s holiday, but the preparation of the children to go to school is going on.”

“As you know, we in Jinwar are surrounded by animals and a shared garden. Last month, we harvested products from the field like chickpeas and lentils. We keep what we need and sell the rest to make a small income. In addition, the sheep of the village gave milk, which was given to the mothers. So, now every house, every family can make cheese. Unfortunately, our only cow died. She was sick and, unfortunately, we could not do anything about it. But there is still one calf, which is called Çawreş, which means ‘black eye’.

By the time you read this newsletter, we will be starting to prepare for winter. We are preserving vegetables like eggplant to make them last, and we are reinforcing the houses to be ready for the cold times. Life goes on for us even in this war situation. We believe that building a meaningful life surrounded by women is a way to defend ourselves and society in this time. As always, we look forward to hearing from you and your reflections, plans for the future and thoughts.”

The women’s village Jinwar is located in the west of Dirbêsiyê in Hesekê Canton. Planning for the project began in 2016 and construction on 10 March 2017. The village was officially opened on 25 November 2018. Women from different backgrounds live in Jinwar. In addition to Yazidis, Christians, Muslims, Kurds, Syriacs and Arabs, women from all over the world also participate in village life. In the village built by women, an ecological economy, women’s solidarity and a common and free life have been developed.

The women of Jinwar welcome feedback, ideas and suggestions and can be reached via the mail address womensvillage.jinwar@gmail.com.

Donations to the women’s village can be made through the following bank account: