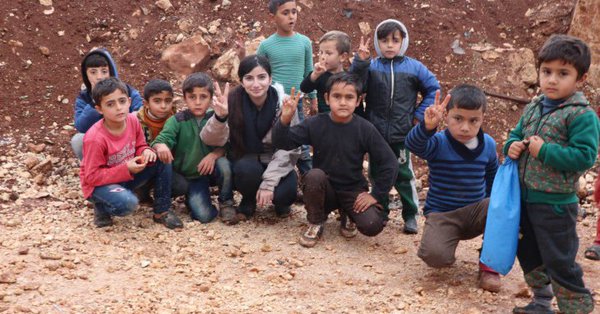 One year ago this month, the first Turkish jets bombed the outskirts of Afrin Canton, a peaceful Kurdish region in northwestern Syria. The military operation that followed, conducted by the Turkish military and members of the so-called Free Syrian Army, devastated an area that had known relative piece throughout Syria’s brutal war. In March of 2018, hundreds of thousands of people were forced to flee, as occupying forces closed in on the center of Afrin city. The final days of the campaign were the most brutal, with Turkish airstrikes targeting overcrowded residential neighborhoods where people displaced earlier had fled, and even bombing Afrin’s main hospital.

While the conflict has since faded from the headlines, it is still a grave reality for the displaced people who fled to Shehba, where makeshift refugee camps were set up with the limited resources available there. Shehba is a small region north of Aleppo, surrounded by Syrian government forces on one side and Turkish-backed rebels on the other. Liberated from ISIS in 2016, its infrastructure is still devastated, and mines left by ISIS still pose a danger to civilians.

Invasion, occupation, and displacement have been devastating for all of Afrin’s people— especially women, who have been targeted for violence and intimidation by occupying forces and who struggle to care for their families with the few resources they can find. In turn, however, Afrin’s women have been a key part of the resistance to Turkish occupation and the re-organization of life in Shehba. Women’s solidarity campaigns have spread across Rojava and the world, raising money to help displaced people and working to break the international silence on the crimes committed by occupying forces.

Delal, a Kurdish woman from Bakur who was previously living in Austria, came to Rojava to work as an activist with Kongra Star, Rojava’s confederation of women’s organizations. She told The Region that she had always wanted to go to Afrin itself, but was unable to because of the occupation. Instead, she traveled to Shehba to work with refugees there— and to share their stories with the world.

“My job as an activist with Kongra Star was to find out how many people live in each camp and what supplies the displaced people in each camp need most. We are working to help the people from Afrin, and to make people around the world aware of these events,” she said.

Delal described the difficult conditions Afrin refugees continue to face, nearly a year after they were forced to leave their homes.

“Every time I talked to [displaced people] and they told me their stories, they started to cry. They mentioned each time how they could only flee with the clothes on their backs, and how Turkey was bombing everywhere. As one woman told me, ‘There were corpses everywhere. We could not look, everywhere were the dead bodies of children.'”

“Now, in winter, the situation in the camps is getting worse and worse– it is often too cold, and when it rains, water rushes into the tents,” she explained. “The children don’t have much in the way of winter clothes, so they get sick again and again. Heyva Sor is in every camp, trying to help where they can. However, there are too many people, and they do not have enough medication.”

Heyva Sor, the Kurdish Red Crescent, is the only NGO consistently operating in Shehba. Other international organizations operating in Syria have not been able to access the area.

Despite these hardships, women in Shehba are working to rebuild some semblance of normalcy. Delal described the women  of Afrin as “experienced organizers,” who had participated actively in different dimensions of social and political life in their communities before the invasion. “The women from Afrin were free and unaffiliated. They participated in the revolution— many of them also worked for Star Congress,” she explained.

“Of course, the situation has changed as a result of the Turkish invasion. But the women from Afrin have not given up, and have started to organize themselves in the camps. From there, they are taking part in various jobs. Maybe they are now living in a camp far from their home, yes, but they will not lose morale— and are now more active than ever in order to show that they have not given up.”

Their goal, like that of millions of displaced people across Syria, is an eventual return to their homes. “When I asked them what they wanted, everyone said the same thing: “We just want to go back to Afrin, we do not want anything else,'” Delal explained.

“They said to me, ‘Delal, if you ever come to Afrin, believe us— you will never want to go back to Europe. Help us go back to our homes, and let people from Europe know what Turkey has done to us. Look where we have to live now.”

Delal believes that women across Rojava and the world have an obligation to support that goal. “As Kongra Star, we created a campaign called ‘Women Rise Up For Afrin for that purpose. We, as women, will rise up against the invasion of Turkey. The defense of Afrin is also the defense of the women’s revolution. We have been running a fundraiser for a couple of weeks, so we can at least help the IDPs in Shehba. Many of the people do not have much, and with help from Europe, we could give people a spark of hope in their lives.”

“We hope that the people outside of Kurdistan also open their eyes, and are not silent about the attacks by Turkey. Maybe we cannot give [displaced people] back their old life, but we can help them to create a better future. I know that many people do not think much about what happens to people from other countries, but we should not forget our humanity. Because as we know, it could one day be us. The people of Afrin are happy about the solidarity from outside and they know that they have not been forgotten. Let us work together to create a better world with the revolution in Rojava, because together we are strong.”