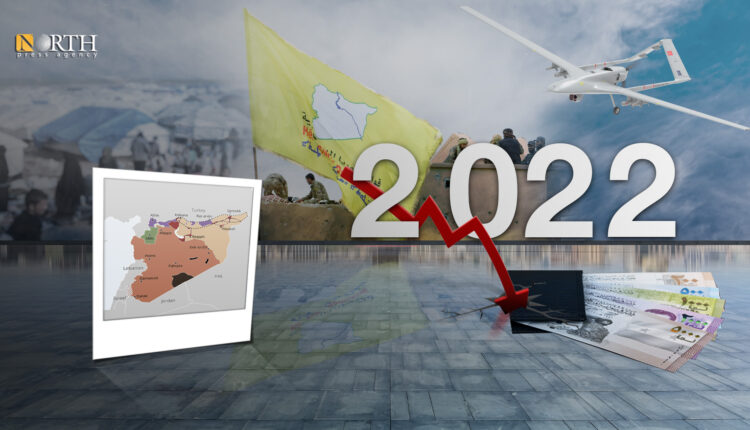 Owing to the repeated Turkish attacks against the region and the issue of the Islamic State Organization (ISIS), the military arena has been the most focused one in the region which is run by the Autonomous Administration of North and East Syria (AANES).

Syrian Democratic Forces (SDF) said in its annual report that 2022 was the bloodiest and most damaging one since the Turkish invasion of both Sere Kaniye (Ras al-Ain) and Tel Abyad in October 2019.

In October 2019, the Turkish military and its affiliated armed opposition factions, known as the Syrian National Army (SNA), launched a military operation dubbed “Peace Spring” and occupied the border towns of Sere Kaniye, north of Hasakah, and Tel Abyad, north of Raqqa, leading to the displacement of about 300,000 of the original inhabitants.

The center monitored 17,596 Turkish violations and attacks, using heavy weaponry, warplanes, and drones during 2022, causing 263 civilian injuries including 59 children, and 44 women, and 59 civilian deaths, including 12 children and 5 women.

The most remarkable attack by the Turkish forces was carried out on November 20, 2022, when aerial bombardment and artillery shelling were mounted at an unprecedented level. Vital facilities and infrastructure in the region were targeted in addition to posts held by the Syrian government forces.

In an interview with al-Monitor on November 2022, SDF Commander in Chief Mazloum Abdi said the “true target” of Turkey’s potential military ground invasion is the symbolic city of Kobani.

44 Turkish soldiers and 22 armed men of the SNA factions were killed with the right to self-defense in 2022, the SDF said.

In a statement released on December 28, 2022, the SDF said they carried out 113 operations with the US-led Global Coalition to Defeat ISIS in Hasakah, Raqqa, Manbij, and Deir ez-Zor in which 276 ISIS militants, leaders, and collaborators were arrested.

The statement added that 387 ISIS militants were killed including 375 of those who attacked the al-Sina’a Prison in the city of Hasakah in January 2022.

On January 20, 2022, ISIS attacked the Sinaa prison which resulted in 374 deaths. 77 personnel of the prison, 40 fighters, and four citizens were killed in the attack that lasted two weeks, the statement read.

On December 26, 2022, ISIS sleeper cells attacked a security complex of the Internal Security Forces of North and East Syria (Asayish) located in the city of Raqqa in which 6 SDF fighters and Asayish members were killed.

In the economic arena, the region has witnessed a remarkable improvement in projects and supporting different arenas.

Following a two-year drought in the region, the AANES constituted Agriculture and Irrigation Board as an independent body from the Economy Board early in 2022 to focus on such an arena as it is immensely related to food security, according to Salman Barudo, co-chair of the AANES Economy Board.

The region faced a deficit in the wheat reservoir reached 300-400 tons, “This pushed us to mix the corn with flour with a 20 percent average to avert an acute deficit,” according to Amal Khuzeim co-chair of the Economy Board of the AANES.

In October 2022, the AANES increased the monthly salaries of its employees marking an average of 370,000 SYP (about $55) except for the members of the Asayish and military formations who receive higher salaries.

In the health sector, four hospitals and dispensaries were opened in Deir ez-Zor, Raqqa, and Shaddadi to provide health care for the people of those areas which were hard hit by ISIS.

For its part, the Health Board in Kobani announced on December 19, 2022, that it had commenced building the Public Hospital in the city of Kobani, to be finished on a two-phase project that lasts for a year and a half.

In the same relation, the Health Board in Qamishli opened the first-ever oxygen plant in the city of Qamishli that could produce 300 cylinders per day.

2022 was marked by the finishing of a lot of projects by the AANES including the pavement of Abyad Road that links Raqqa with Hasakah.

In August 2022, a new road was initiated between the two cities of Derik (al-Malikiyah) and Qamishli that reaches 100 km in length. The road could serve 500 villages and is considered the linkage between Semalka border crossing and the cities of northeast Syria.

On November 5, 2022, the People’s Municipality in the city of Hasakah initiated the largest garden in northeast Syria covers 45 acres. It is scheduled to be finished by April 2023.

2022 witnessed a diplomatic breakthrough with countries that repatriated their citizens from northeast Syria.

The Foreign Relations Department of the AANES said in a press conference they handed over 515 persons (ISIS women and children) to 13 countries in 2022 with Tajikistan topping the table with 146 persons, followed by France with 109, Russian Federation with 968, Germany 53, and the Netherlands 60.

There are 20,000 people representing 50 countries of ISIS families held at Hawl and Roj camps in northeast Syria.

The statement noted, “Foreign Relations Department garnered world attention owing to clear activity in the diplomatic area amid a military, security and political openness in 2022.”

Visits paid by figures of the AANES to a number of countries shed light on the Turkish breaches against the region and introduced AANES to those countries.

The visit paid by the Head of the Patriotic Union of Kurdistan (PUK) Bafel Talabani to the region was a remarkable one in 2022. Talabani met with Mazloum Abdi and other figures of the Democratic Union Party (PYD).

The AANES said it still adopts a vision based on an intra-Syrian solution to the crisis in the country. It said a Russian-mediated meeting with Damascus yielded no results.

The Syrian Democratic Council (SDC) revealed its position on the Russian-sponsored meeting between the defense ministers of Syria and Turkey in Moscow on December 28, 2022.

In a statement released on December 30, 2022, the SDC said they were deeply suspicious of the meeting held in Moscow, adding, “We strongly condemn the continuation of the Syria bloodshed by the Justice and Development Party for the sake of preserving the authoritarian power of Damascus.”