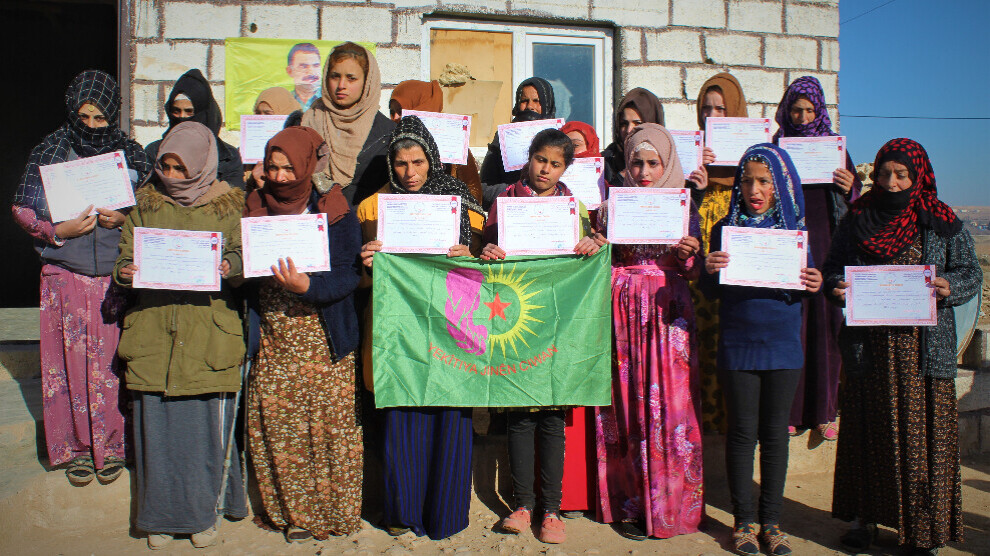 Young women continue to carry out activities for women in the town Tell Tamer despite the ongoing Turkish attacks on the town. In order to support women’s economic empowerment, the Young Women’s Movement started a sewing course named after YJA-Star guerrilla Rîhan Xelef (nom de guerre: Berfîn Botan), who lost her life in the Medya Defense Zones on June 11, 2022, in the Tell Tamer town of Hasakah, northeastern Syria. The women attending the course received their certificates after completing the course.

Speaking about the sewing course, Rîhab Elo, member of the Young Women’s Movement, said, “We continue to carry out activities for young women despite the ongoing Turkish attacks on the town. We want to reach more women to support them in realizing their dreams. We aim to support young women in spheres of life. In order to support them, we started a sewing course about a month ago for 25 young women aged from 15 to 25.”

Rîhab Elo also talked about the aim of the sewing course as follows: “We aim to support young people suffering from the worsening economic crisis by developing projects. We have also held seminars and training courses to teach young women how to use weapons. We aim to develop more projects for women.”

She learned how to sew despite having a leg

Sara Umer, who has only a leg, is one of the women attending the sewing course. “I faced difficulties in coming from the village to attend the course. I attended the course to serve myself and my community. I lost one of my legs in a car accident 12 years ago. At the beginning, I had difficulty using the sewing machine. But I never gave up and learned how to use the sewing machine with a leg. I want to start my own business in future.”

After receiving their certificates, women danced the halay.