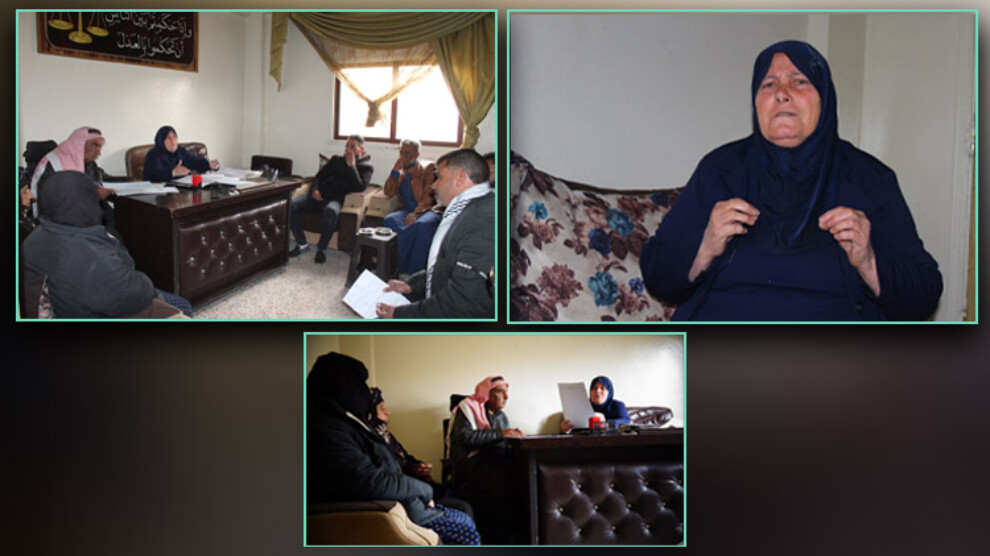 Stating that before the revolution, problems in Rojava were tried to be resolved by a male perspective, Elya Oglo, a member of the Conciliation Committee, said that after the revolution, social justice is achieved by women.

In general, women defend the rights of all living creatures. Unlike the system, which says that women cannot see the truth because of their attitudes, women use both their hearts and minds in delivering justice. Before the revolution in Syria, the opinion leaders tried to solve problems faced by citizens and there were no women among them. However, this situation changed after the revolution started on July 19, 2012, and later spread across north and east Syria. And people began to see the color, knowledge, and dignity of women in resolving conflicts between people. The Conciliation Committee of the Til Temir District Council was established in 2012. The committee member Elya Oglo gave us information about the works of the committee.

“The committee works coordinately with the Women’s House”

“We act fairly in solving problems”

Underlining that not every case is concluded at the Conciliation Committee, Elya Oglo said, “Particularly, the cases about fraud and cheating are not concluded. When such cases are not resolved, we send them to the Court of Social Justice and they try to solve the problems. But we do our best to solve all problems because conciliation is the best solution. The committee mostly deals with money laundering, farming, embezzlement, extortion, and fraud cases. When there is a case about women, we immediately send it to the Women’s House. We try to resolve cases peacefully before starting the legal progress.”

Stating that the committee received 3,990 applications in three years, Elya Oglo said, “As the political problems depend on the economic situation, the people have economic problems due to the embargo imposed on the north and east of Syria. For this reason, the number of fraud, harassment, and many more cases have been increasing. According to the report we prepared in 2022, we received 3,990 applications in the last three years. We have resolved 1,002 cases until now. The other cases were sent to the Court of Social Justice.”

Noting that they are also closely interested in the problems faced by the Syriac women, Elya Oglo continued to talk as follows: “We don’t work only in offices but also everywhere. We join the meetings held by the assemblies of the opinion leaders and communities. We also hold meetings with the opinion leaders and tribe leaders. Syriac women are also subjected to violence like women of other nationalities. In addition, they face other problems in their families for being subjected to violence. The women seek divorce. We support them to overcome the problems.”

“Women are the basic balance of society”

Underlining that women are the basic balance of society, Elya Oglo said, “I especially thank the women who have fulfilled their duties and missions in the conciliation committee of NE Syria. We hope women to take stronger and more effective steps.”